Wind on the Beam 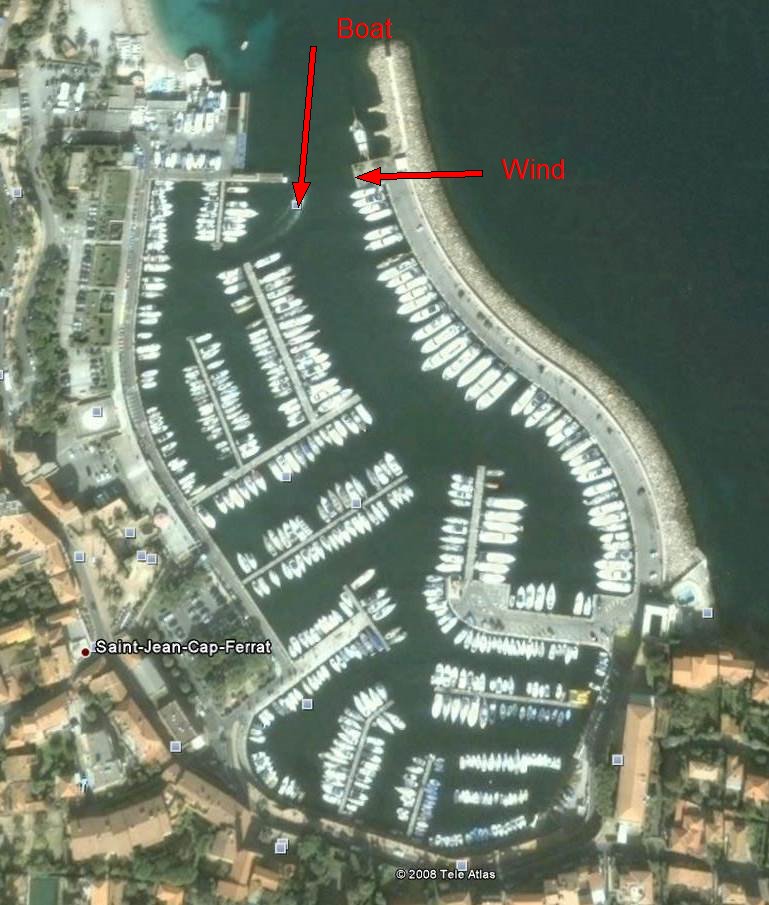 Dinner today was fairly exciting. We were at a restaurant perched above the port of St Jean Cap Ferrat. We noticed this afternoon that there was a lot of wind, but nothing too bad: 15 to 20 knots. However, around 7pm the wind started climbing and by 7pm the wind was a steady 30+ knots.

For the first half hour, no boat tried to enter the marina, but then we saw one brave soul, a 90′ yacht make an attempt.

Our boat was based for four years in the port of Beaulieu, perhaps a half mile east, so we know the area well, and we know VERY well what it means to enter the port in 30 knot winds. Actually, to be completely honest, what we are experts at is anchoring IN FRONT of the port until the wind dies. We have spent two very memorable nights anchored in front of this particular port.

My guess, with respect to this particular boat, is that they had passengers on board, probably the owners, who did not want to spend the night at anchor. The captain had no choice but to TRY to bring the boat into port.

He entered from the top of the photo below (the north), with the wind coming strong from the right (the east). The wall isn’t very tall, and taller boats get pushed around. This boat entered normally, proceeding south-wards, but as it reached the point where I have drawn the arrow heads, the boat made an “unscheduled” sudden turn to starboard, putting its stern (butt) into the wind. It is possible the captain decided the wind was too strong, and was flipping a U-turn, but that’s not how it looked. My guess is that he got nailed by the wind. From our vantage point it appeared that he almost touched the bow of one of the boats moored to the west.

He hit reverse and seemed to hover for what seemed an hour, but was probably no more than a minute. I expected him to back his way out of the marina. But, instead, he swung his stern to the south, pointing his nose to the north, and as soon as he was beam to the wind (on his starboard side), he “put the pedal to the metal” and ran as fast as he could to the north, leaving the marina.

It took me a few minutes to think about why he turned around instead of just backing out. The answer is that these boats tend not to have much control in reverse (or, at least that’s my theory). He knew that as soon as he had his nose pointed the right direction he would have control of the boat. I would have been nervous about being beam-to the wind .. but, he made the smart call. He was going to be beam-to the wind in all scenarios, and he would have maximum control of the boat moving forward (with the rudders BEHIND the props).

PS I’ll write tomorrow about our WORST-ever night at anchor, which was spent in 50+ knot winds, sitting just in front of this port.

Post Views: 262
PrevPrevious PostThere is always somebody with a bigger one
Next PostA close encounter with a very big shipNext