Various Work on the Boat 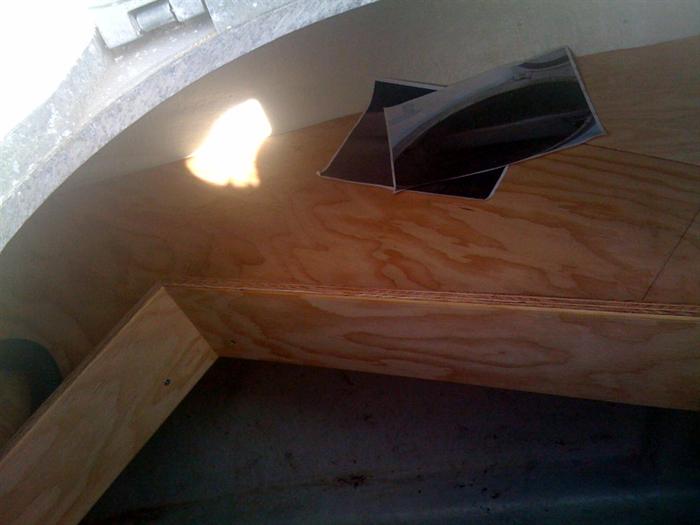 The Miami boat show is going now. I wanted to be there, but there just wasn’t a way. There is too much happening as we come down to the final weeks before the GSSR.

I’ve been getting reports from friends, who say that the overall tone is depressing. It’s a tough market out there. Discounts are not hard to find and, if you have money to spend, you will find deals possible that never would have been considered a year ago. Of course, if you are in the boat business, or about any business at the current time, these are not pleasant times.

We’ve been in Cabo for the last month, but fly to Seattle in the next hour. It will be my first chance to see the boat. I should have some pictures by the end of the week.

The boat has been out of the water for several weeks, having some major work done. Jeff (who is managing all the work) sent me an update, a few days ago, which gives a hint of how much work is going on:

The comment about the chain locker shelves is worth elaborating on. The N68 is setup for twin anchors, and has two completely independent chain lockers. Both are huge. I’ve been using the port locker for storing dive gear, fenders and anything else that doesn’t seem to fit elsewhere. The only negative is that there is no ventilation or cooling in the chain lockers, and they can get humid. I asked Jeff to install shelves in the port-side chain locker, with netting that I can use to hold spare parts in place.

Jeff’s comment about the seachest in the list above is only a small hint at all the work going on. The seachest work wound up being the largest of all the projects.

During our trip to Costa Rica, the boat was in 95 degree water for months. My thru-hulls, and the hoses to the strainers, were clogged by barnacles and even dead fish. The second N68 spent the summer in equally warm water, and had no problems. I visited the boat and quickly observed that there were major differences. On newer boats, Nordhavn has dramatically increased the size of the hoses leading into the seachest, from 2” to 3”. I spoke with Nordhavn, who said that upgrading my boat was not necessary, and that I was fine to stick with what I had. I decided to upgrade anyhow, and to use the opportunity to fix several other potential problems. I installed significantly larger strainers, an exterior strainer, larger hoses, and removed any sharp turns from the hoses. It wasn’t fun dealing with the problem in Costa Rica, and I made the decision that I was never going to have the problem again. A friend recently described, in agonizing detail, the “fun” of cleaning jellyfish out of his strainers. I’m hoping, but not very optimistic, that the exterior strainers will shield me from this unhappy future.

Another large project, which is mentioned in Jeff’s list is the battery-swap. My goal was to cut in half the square footage occupied by the batteries. In these pictures you see the area where my batteries were located. This area was completely unreachable. There was a 24v panel that sat on top of the batteries. This panel had to be completely redesigned and re-fabricated. It was a tricky project, but I achieved my goal. The lazarette was the one area of the boat that needed fixed. I had too much equipment in too tight of a space.

The list mentions “engine room air” and “Lazarette air”. I beefed up the fans, and even enlarged the intake/outtake openings, in order to move more cooling air in and out of the machine spaces. As I’ve mentioned before, I’m a warm weather guy. This trip north is an anomaly. I want a boat that is at home in tropical climates.

Not on Jeff’s list above, but one of the things I did was to dump one of my old monitors, and replace it with a huge VEI monitor. I had a standard Samsung computer monitor/television sitting in the center of my pilot house dash. It worked fine, but never dimmed correctly at night. The new monitor barely fit, but they shoe-horned it in. I wanted the big monitor because I like to run at super-high resolution; specifically 1900×1200. This allow me to have LOTS of the chart visible, or have multiple windows open. I tend to have the nav software, plus the air mar wind guage, plus cameras, and sometimes, even television, all on screen at once.

Lastly, Jeff mentions the Kabola exhaust. I have a diesel furnace that vented to the outside of the boat about a foot off the water. While underway I was always afraid to run the diesel furnace, for fear that I’d take a wave, and push water back through the exhaust and into the furnace. I actually did this a couple of times, and fortunately, the only damage was to put out the flame. To avoid this, I made a “cork” that I’d stick in the exhaust while underway. For the Bering Sea we’ll want the diesel furnace while running, so I had Jeff reroute the exhaust to fix this.

On a completely different topic…

There is a new “discussion forum” that started up over the past week. I have nothing to do with it, other than having joined it, because it sounded fun. It can be found at: http://groups.yahoo.com/group/NordhavnDreamers It’s a discussion group amongst persons who plan to own a Nordhavn someday. The “real” Nordhavn owners group is restricted to “owners-only” so those who want to discuss Nordhavns were seeking a place to call their own. It has quickly attracted members, including several Nordhavn owners! If there’s a Nordhavn in your future you might want to check it out.