Update #9 – At anchor in the San Juans 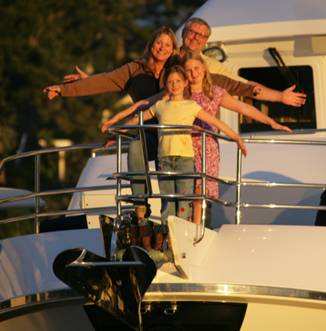 After our return from Victoria, we decided to spend Labor Day weekend sitting in our slip at Roche Harbor. On any normal summer weekend, the Roche Harbor marina is packed. On Labor Day weekend, it is insane. There are non-stop parties and multiple live bands (some of which are on the docks). Just watching all the boats arriving and departing is an endless stream of entertainment.

On Sunday morning, our guests headed back to civilization, leaving Roberta and I with only 12 days before we are scheduled to hand off the boat to the mechanics. The boat starts heading south to Costa Rica in October, and I have a list of items I want to get done before leaving the country.

Roche Harbor sits on the US/Canada border, just south of some of the best cruising in the world. Our toughest decision was: With such limited time, “where do we go?” On Sunday afternoon we visited with some other Nordhavn owners (Dean and Ingrid Heathcoate, on Segue, a Nordhavn 55) who told us about one of their favorite anchorages in Desolation Sound, about 125 miles north. They had pictures of their boat backed up to a tiny island, with a line extended from the stern to a lonely little tree. They had dropped anchor in 120 feet of water. The pictures were very cool, but I’ve never ran a stern line before, so I wasn’t certain. Running the line is easy, but the tides move up and down 10 feet, making deploying and retrieving the stern line, plus picking the right place to drop anchor, tricky. We discussed alternate destinations, but at dinner the idea of being tied up, in the middle of no where, to a tiny deserted island, won the debate.

The run from Roche Harbor to Desolation Sound is somewhat “technical.” It’s not particularly difficult, but it can be if you don’t do your planning.

As you can see in the picture above, you need to cross a large body of water, the Strait of Georgia. Wind on the Strait can be fierce, and it can almost always be counted on for a miserable ride. With our Nordhavn 68, we would be safe to run the middle of the Strait, but unless it was a very unusual totally calm day, the odds are we would be in for ten hours of bumpy ride. On smaller boats the Strait can be quite dangerous. It was during a crossing of this Strait, just over a decade ago, that we decided we needed a Nordhavn. We were south bound when we encountered bigger waves than we could handle, in our 44’ boat, and had to make a very carefully timed U-turn, turning back in heavy seas.

The beauty of the route pictured above is that you are only in the Strait for about 20 miles. Most of the ride is well protected, and provides relatively calm water in virtually all conditions. The downside is that there are narrow passages which exit into the Strait, and these are prone to strong currents. On our north bound passage, we would be entering the Strait just south of Nanaimo via the Dodd Narrows. Looking at the current charts showed that the currents could be as high as 7 knots, but would be slack at 4pm. We shot through Dodd Narrows last year on our little 27’ power catamaran, with barely a glance at the tide charts. At 30 knots on a little boat, 7 knots of current is only a mild annoyance. On a 100 ton boat, that does only 10.5 knots, a 7 knot current, in a tight channel, doesn’t work. Approach Dodds Narrows, you often see a crowd of boats sitting, waiting for slack time, so they can sneak through the passage before the current starts flowing again.

For us, 4pm worked well as a slack time. We wanted to get up early, clear customs, and arrive at Dodd Narrows just as the water slowed to a crawl. Our plan was to get to the north side of the narrows, and then drop anchor for the night, crossing the Georgia Strait the following morning.

Of course, in boating, plans don’t last very long. Waking up at 5am yesterday, ready to start the engines, Roberta said: “I’ve got a clinker for your plans.” She followed with “We only have 12 days. I’m tired of being on the move. Rather than going north, let’s take our time heading south, and spend most of our time relaxing at anchor.” After saying “Huh?” I decided she was right. We have many thousands of miles of cruising ahead of us this year. The past two months have been a lot of hard work. Commissioning a new boat is an intense experience. Perhaps 12 days of being lazy wouldn’t be a bad idea. We are currently sitting about 100 miles north of Seattle, where the boat goes in for service. We’ll just work our way south, and spend our time relaxing at anchor.

We decided to spend our first night anchored at Spencer Spit on Lopez Island. This would give us a chance to drop the larger of our two tenders (a 14’ AB Inflatable) and see if it wants to work better than the smaller Zodiac. This would be our first time to drop the AB tender. The Marquipt davit made it easy, although not as easy as expected. The davit is on the starboard side of the boat and the AB tender sits on the port side. The davit extends to make itself longer, but I was somewhat reticent to test its maximum length. It’s a 2,500 pound davit, and I’d guess the inflatable with the engine at 1,400 pounds, so I have plenty of margin for error. That said, I seem to remember that the lifting capacity drops as the boom is extended, but have forgotten how much. I’m confident we are well within the operating limits, but decided to drop the tender at the location that allowed me to have the boom extended as little as possible.

At high tide, the tip of the spit submerges

The tender was a pleasant surprise. It ran perfectly. We wanted to hike the beach, which meant dragging the tender onto shore. Nothing on a boat is ever as easy as it should be. The tide was going out, and I knew that if I left the tender on the beach for long it would be stuck sitting dry on the sand. I left the tender as far out as I could (I was limited by the length of the line I had brought to tie it to a tree), and knew that hiking would be limited to 30 minutes, or I would be staying an entire tide-cycle.

My favorite picture of Sans Souci thus far, taken from the tender at sunset

Back on the boat, I filled the hot tub. I refilled our fresh water tank using water from the water makers. We have dual 800 gpd Village Marine water makers which put out a steady 60 gallons per hour. Sitting in the hot tub watching the sun go down would have been perfect, had a boat not parked about 50 yards from us to retrieve their crab pots. I’m not complaining. Life is good.

I woke at 6am this morning to fog so thick I couldn’t see the bow of the boat. We are near a ferry route, so every few minutes I hear a fog horn. This gives me a chance to try the night vision camera in fog. As feared, it is useless.

One thing worth noting: Roberta and I had been concerned about whether or not we would be comfortable handling the boat alone. This trip was our first run with no one on board to help, and it went perfectly. Thus far, our feeling is that particularly because of the twin engines, and strong thrusters, this is a much simpler boat to operate than our 62 was. Cleaning and maintenance are the areas where things get more complicated. Fortunately, our cruising budget calls for cleaning crews when we can find them and flying in maintenance technicians when the need arises. Handling the boat will not be an issue.

Over the past week we had about 100 new people sign up for my blog as a result of a mention on Nordhavn’s website. I’d like to use this opportunity to welcome all the new arrivals. As a quick background for the newbies: Sans Souci is a Nordhavn 68. I just took delivery in Dana Point (near San Diego) and am in the final stages of a “shakedown cruise” to Seattle prior to heading south to Mexico and continuing to Costa Rica. Once we leave the US fixing anything on the boat will be complicated. My goal for this trip was to use every system and identify any punch list items before leaving the country. After Costa Rica, the boat comes back to Alaska next summer, and then heads across the Pacific. All of this said, I did careful trip planning to be in Canada yesterday, and we see how that turned out….It’s something that is very cool about a boat. I’ve been in many conversations where someone says “I’m not sure what our plans are. I’ll head south to the Panama Canal, and then figure out if I want to make a right or a left turn.” Cruising is about having fun, and going where the mood, and the weather, takes you.