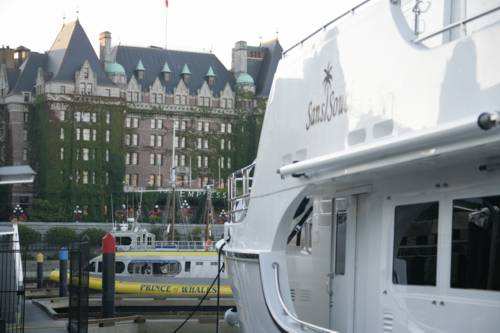 We have my brother, his wife and his two little girls on the boat this week. Last week we had Roberta’s parents. One thing I’ve discovered is that when you live in Cabo, and have a boat traveling the world, you tend to get a lot of guests. We’re always happy to welcome relatives and friends, so this is a good thing, although it can be complicated. For instance, I’m working now on how to have some close friends of ours (Al and Margaret) from Seattle on the boat a couple of weeks from now. The email exchange has gone a little like this:

Ken: Come visit us! We’re at Roche Harbor
Al: Yes. We’d love that. We’ll drive up next week.
Ken: Great! But, next week my brother is here. How about the week after that?
Al: Yes. That works. We’ll see you at Roche Harbor!
Ken: Good! Except that as soon as my brother leaves, we’re heading north. I’m not sure where we’ll be.
Al: How do we come see you?
Ken: Well… as we get closer, I’ll tell you where we are, and maybe you can drive or fly there. Maybe we could meet in Vancouver!
Al: Vancouver would be great.
Ken: But, we might drop you off in Campbell River.
Al: How do I get back to my car?
Ken: We’ll have to figure this one out as we go. We’ll talk again next week.

Things are always a little random on a boat. For instance, my brother arrived on Monday, and our plan had been to just relax for a few days at the marina, at Roche Harbor, and then consider going to Victoria Canada, for a few days. While I was talking to my brother, I said “Maybe I should call and see if I can get us into a marina starting on Thursday or Friday.” This resulted in my quickly discovering that this coming weekend is Labor Day weekend, and that all marinas are booked. After thinking for a few minutes, I said “Want to go to Victoria now?” Roberta was out walking Shelby and I surprised her with the news that we were about to leave for Victoria. She suggested we wait and go on Tuesday morning, which worked fine for everyone.

From Roche Harbor to Victoria is a very short, usually very easy, and incredibly beautiful ride. Our departure from port was as easy as it gets.

The yellow line in this Google Earth snapshot shows the US/Canadian border, and the white line, our approximate route

I’m still struggling a bit with navigation software. I bought Maxsea, and decided I don’t like it. I just bought a different keyboard to use with it, which might help. Also, I’m thinking I’ll reinstall it with “raster” maps (scanned versions of paper maps) instead of the vector maps that it is now using. I like the idea of having two different charting programs going (Navnet and Maxsea), one with paper charts, and the other with the computer generated charts. Between the two I’ll have a better idea what is around me. I’ve received a lot of email recommending I go to Nobletec, which is the probable outcome of all this. I’m taking my time switching because Maxsea is a Furuno product, and I’m trying to stick with an “all Furuno” solution in the pilot house.

There were a few tricky things on the run to Victoria. One thing worth noting is that this is an area heavily trafficked by big freighters, fishing boats, whale watching boats, and pleasure boats. Adding to the “fun” is a lot of little islands, reefs and shallow areas, which are easy to avoid, but represent great short cuts if you pay attention and know what you are doing. Last year, on our little 27’ catamaran with its 22” draft, I enjoyed zigzagging through the islands. On this boat, you’ll note above that I stuck to the deep water, which put me out into the shipping lanes.

Note this little piece of the “paper” chart:

I was running south, at about the center of this chart. For those who read this that aren’t used to looking at these charts, I’ll explain a few things. First, the big white area in the center is the water. On the water you see lots of little numbers. Those are the depth. If you look closely, you’ll see what looks like roads drawn onto the water. In the center of the road you see a thick pink line. The idea is to create imaginary roads on the water, so that northbound, and southbound, (or, east and westbound) ships are clearly separated from each other. It’s exactly analogous to freeways on land. The pink-ish strip represents a divider between the traffic. The problem is that unlike the freeway, where most vehicles are traveling at roughly the same speed, freighters tend to move at least twice as fast as we do, and completely fill the lane. Also, unlike the freeways, freighters do not wait patiently behind you and pass when convenient. This is not what the books say, but my observation is that there is an unwritten rule of the road at sea: “The big boat calls the shots.” Technically, if I am south bound, at 8 knots, and an 800 foot freighter is behind moving at 25 knots, it is his problem to figure how to get around me (or, at least that’s my interpretation of the rules). In actuality, if I’m in the traffic lane, and there is a freighter coming up behind, my #1 thought is to exit the lane and give him as wide a berth as possible. As you can see in this snippet of the chart, exiting the lane is not clearly an option while moving south or west to Victoria. In actual practice this isn’t a real problem. The big freighters are visible from miles away. In fact, with our AIS system I know where they are 50 or more miles away. Plus, as a vessel over 20 meters, I am required to monitor the vessel tracking channel. On our arrival in the area, the Vessel Traffic monitoring people were speaking with us to get our plans even though we were miles from the nearest freighter. Vessels are tracked similarly to the way a control tower operates at a busy airport.

Although Victoria was a short 30 mile run, it required my clearing into Canada. The charts and cruising guides told me that there would be a customs dock, and that I would be required to tie up, and clear into the country, but I was hoping I could skip a step. We were going to a slip in easy view of the customs dock, and I didn’t really want to park the boat twice if I could avoid it. No luck: I called visitor information, and customs, wanting to see if I could speak with the customs dock, and after 30 minutes or so of voice mail hell, gave up.

The actual customs dock at Victoria is a simple pier, jutting about 40 feet into the water, with a small yellow phone on it, a sign that says “Customs” and nothing more. No people in sight, and the gate on the dock is locked. As I motored up to it, and looked through the binoculars, I kept thinking I was in the wrong spot. How does one park a 70 foot boat on a 40 foot pier? Yes. I know – Very carefully. As I was spinning the boat, to tie up on the port side, I was constantly being passed by whale watching boats, and these little gnat-sized green tourist ferries. The ferry drivers seemed to have no fear, and were happily passing between me and the customs dock.

With the back half of Sans Souci tied to the customs dock, I called in and the yellow phone, and a couple minutes later, after reading off the passport info for all passengers, I was on my way. They gave me a little number to post on my dockside window, and that was it.

As a boater, Victoria Canada is one of my favorite cities in the world. The public docks are cheap, usually easy to get into, and wonderfully located. There are plenty of shops to walk to (even a Starbucks!), restaurants, car rental places, tourist activities and more. The whole downtown seems oriented around the marina. I’m blown away by where we are parked.

Here are a few photos of Sans Souci here in Victoria Harbor. I can not overstate how COOL it is to be parked in front of the Empress Hotel.

My project this morning: I can’t find the “courtesy flag” for Canada, which I should be flying. Also, the marina has only 30 amp electricity service and I have a 50 amp electric cord. I need an adapter. I’m sure there is a marine store somewhere within walking distance….

In my last update, I included a comment questioning whether or not the money was well spent on my “Satellite Compass”. This triggered a round of comments on my website that I thought people might enjoy:

We are parked in front of the Royal BC Museum which happens to have an exhibit of Titanic artifacts. In preparation for touring the museum today I decided we should watch the movie last night. I had forgotten what a great film it was, and look forward to our touring today.

Tomorrow morning – back to Roche Harbor! (and, US Customs….)

PS A professional photographer was on the boat for two days last week. The photos are amazing, and I know a magazine cover is being considered. I have some of the photos, but don’t know what I can or can’t show. With a little luck I’ll be able to post some of them soon.
Post Views: 278
PrevPrevious PostUpdate #7 – At anchor in the Pacific NW
Next PostUpdate #9 – At anchor in the San JuansNext