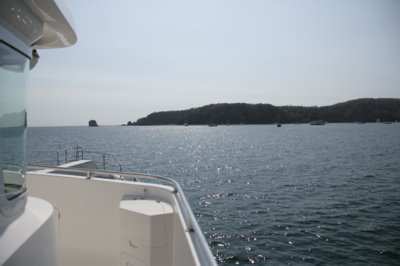 I had a long list of projects for today, and successfully accomplished ZERO of them. Days at anchor are like that. Somehow, the time passed, but I can’t say a lot got accomplished.

Well…. There was one major personal achievement today…

The cruiser net I discovered on VHF Channel 22 whetted my appetite for more. I found it a valuable resource, and know that additional cruiser nets exist that I’ve not been able to hear. That’s because they take place on Single Side Band (SSB), which has always seemed to me an intimidating device. I’ve been “going to learn it tomorrow” for years now. Today was to be the day. Before going to bed last night I read the instruction manual for my Icom 802 SSB cover to cover. Then, this morning I woke at 6am, so that I could experiment with the radio for an hour before the first Net was scheduled to be broadcast. I quickly discovered that it was much simpler than expected, and that I should have been using the SSB for years. Sure enough, at 7am I was listening to a weather update. I spent a couple of hours listening to other cruisers (that’s what I’ve been told us boaters prefer calling ourselves) discussing anchorages, the weather, marinas and more. Often, I could only hear one side of a conversation, and I still don’t know the rules on which channels (if any) I am allowed to transmit on, but it was still a worthwhile effort. Now that the ice has been broken, I’ll automatically listen to the nets while cruising. The toughest thing to figure out is “what frequencies and when”. From now on, before cruising in a region, I need to go to google, and research the cruiser nets in the area. I overheard someone on Channel 22 giving out the schedule and frequencies. I also found a schedule and list of frequencies in a local magazine I found: Vallarta Nautica.

After lunch, we decided to take the tender and try to explore, but before heading out, I realized that the tender needed fuel. No problem. We are prepared for anything on Sans Souci. Here’s a picture of Roberta’s mom passing me the fuel line from Sans Souci.

There is a river that starts here at the bay, and goes back through the jungle for miles, ultimately arriving at a small beach where there are some beach front restaurants. I was warned that the river is under six inches deep in parts, and that I should tread carefully, but that it is an incredible experience. We tried, but couldn’t even make it into the mouth of the river. We had waited until too late in the day, and the wind had come up. There were breaking waves in the mouth of the river. Obviously, this is a project for a windless day, or one when we can get started before the wind comes up.

I wanted to swim to shore, and hike around to explore, but we had Roberta’s parents in the tender, and our dog Shelby. They outvoted Roberta and I three to two, so we decided to explore from on the boat. I wasn’t overly worried about it. We’ll be back here to Tenacatita in a little over a week, along with some Nordhavn-owning friends who are flying in to take over for Roberta’s parents. They will want to see Tenacatita, and I’m sure we’ll do the river trip with them.

The bay is huge, roughly four miles wide and four miles deep. There is a village (city?) at the eastern edge of the bay, called “La Manzanilla”. We thought there could be a dinghy dock there, or at least a beach we could land on, so we shot across the bay.

As we were crossing the bay, the wind and swell were coming up. We were starting to see some white caps, and although you can’t tell it in these pictures, there was a three foot “chop”. The tender (a 15’ AB Inflatable) did fine, but John and Nova looked very nervous. The village of of La Manzanilla looked like a great place to have lunch at one of the dozens of very attractive beach front restaurants, but clearly our guests were convinced we would be capsizing any moment. Roberta was running the tender, and doing an outstanding job – but, we decided to cut the expedition short. The village looked too good to miss. The marina isn’t far away, only about 15 miles. We should be able to drive back here tomorrow or the next day before Roberta’s parents depart.

Here are a few pictures I snapped on the way back to the boat:

In the background you can see the beach with wheeled tenders

Sans Souci, at anchor, with the flopper stoppers out
Sans Souci

Tomorrow, I move the boat to the marina at Bahia Navidad (everyone seems to call it “Barra”). It’s a very short run, and the weather is supposed to be perfect. About a third of the cruisers left the anchorage late this afternoon. My guess is that these are northbound boats who saw the perfect weather forecast for the next few days, and wanted to start the run north to Puerto Vallarta.

PS Here are some recent emails. If you have feedback for me, email to: kenw @ seanet.com

Not sure you know–you probably do–but

When towing at sea, the more weather you are encountering the further out your barge-tender-whatever should be. This will allow the line to give way to the waves so that (in your case) the tender has an easier passage and isn’t finding itself being pulled nose down into oncoming water and it also reduces stress on the line itself.

An important point: when towing, should the boat and the barge (tender) encounter opposite sea thrusts, without sufficient slack in the line the line itself is quite likely to snap. Imagine the face of a wave rising up under the stern and the boat wants to surf. Meanwhile the towed vehicle finds itself facing the tail of a wave and rears back. This action stretches the tow line. A dangerous situation. Many tug boaters have been killed in this situation when the tow line parted and whiplashed back to the boat.

Sometimes on the tugboat we’d have our ocean going barges a mile or more behind the boat. You’ll have to experiment to find the right distances for different sea conditions.

I am very much enjoying your daily reports.

This may help you when anchoring with wind, swell, or chop at different angles. Take a spring line with a chain hook from the anchor chain near or below the water surface and take it down to a mid-cleat, which will move the bow into the chop or swell. This will counter the boat being held to the wind by the anchor off the bow. You are now turning the boat into the swell, chop, or current as much as you can. This should change your motion from bow to stern, rather than side to side.(In lieu of a chain hook, tie the end of the spring line to the anchor chain.) We have also found the use of a spring line (anchor snubber) between the anchor chain and the boat, with a loop of chain hanging from the bow roller to the chain hook or tie. This takes the “snap” out of the anchor chain pulling tight to the boat. This procedure has worked well for us in our travels on the coast and through Alaska.

We enjoy your detailed blogs of the areas you have visited. Hope this helps.

+++ This sounds tricky to do! I think I’ll try it the first time when I have someone on the boat that has done this before and knows what they are doing. It will be interesting to see how it works.

We were at Anna Bananas on Sunday and saw you were in the marina… and then after some excellent open mic music, noticed you’d left!

The Golfito voyage left in December and as you say, there is nothing on their schedule for 08 as yet. Management are having a big meeting in a few weeks time, so if anything changes, I will get right back to you!

+++ This message was sent as part of a dialog I was having with Ronnie about Dockwise, and whether or not they are running the west coast. For those who aren’t familiar with Dockwise, they are worth knowing about if you plan on doing long distance cruising. Their services are not cheap, but they can safely and easily move your boat great distances, via a large freighter. We twice used them to ship our boat to the Med, and will be using a competitor of theirs (Yachtpath) in April to ship our boat from Costa Rica to Victoria Canada. This will be our first trip with Yachtpath, so I can’t say yet how they are to work with. I had originally wanted to ship with Dockwise because of our past success with them, but they said they would not be doing any west coast shipments in 2008.

Take care Ken….I gotta go make my protest sign. I think it will read “We’re left in the dark while Ken’s swimming”

+++ No worries. Today’s update has LOTS of pictures… !

I have a Nordhavn 50-. It sounds like Barra will be perfect for your current situation. Beautiful marina, nice folks and a setting where we spent 6 months several years ago. Going in, keep to the right and watch for the wave deflector at the end of the jetty on your port side. It’s nice to go in the first time in the daylight. A beautiful anchorage at Tenecatita a few miles north. Happy Trails– Rich J

Try looking into one of these as a “beachable tender”… http://www.sealegs.com/?gclid=CJq0spqYnpECFQIQFQodtz7bPQ

I ran into the same problem with our dink. With the motor, fuel, and everything, it weighs in at 700 lbs. I found the answer in the portabote: http://www.porta-bote.com/ We call it a beach boat.

Including the engine, it only weighs about 75 lbs. It takes up to a 4 HP engine. The boat weighs 58 lbs and the engine weighs 38 lbs. It can be assembled and launched by hand which also makes it a good dinghy to use when you have rolling seas. I have the 10′ model and keep it folded and stores between the chocks for my big dinghy. I actually think that the Portabote has more interior room than my 12′ Caribe.

I don’t have the accessory wheel that you can get with the boat and still find it a piece of cake to drag up on the beach and back. It planes much easier than the big dink. No one boat does it all, but I think if you limited me to one boat, the Portabote would be my choice.

+++ I’ve already added a Porta-bote to my shopping shopping list. I wonder if they can deliver to Mexico? I need something NOW!