Update #7 – At anchor in the Pacific NW 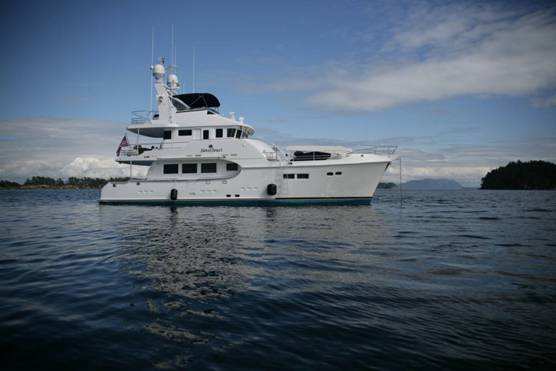 Yesterday was a bit of a milestone. We’ve been living aboard the boat for a week, but today is the first time we’ve gone out to anchor. As I’ve mentioned before, our only goal for our first month with the boat is to learn all of the systems.

Leaving port was a non-event. I had Roberta’s mom, and my son Chris, armed with large fenders, ready to plunk them between our boat and any other boats we might ricochet off, but everything went perfectly. I asked the marina about a more appropriately sized slip, and they said “No problem. Expect a three year or longer wait.”

Early yesterday morning, we dropped anchor about 20 miles east of our marina, in a little bay on the island of Sucia. This isn’t much of a first trip, but our goals are modest. I always believe in a crawl-walk-run strategy. For this trip, all I wanted to do was drop the anchor, drop the tenders, and see how everything works. I’ve already hit several surprises, all of which we’ve worked around. As I type this paragraph I know that there are people who will read this who will be totally confused. I have a 100 ton US license, plus a European Yachtmasters license, and over 10,000 boat-miles under my belt, and see going to anchor as a meaningful exercise? Yes it is bizarre. All I can say in our defense is that we are cautious people, and this is a complex boat. Plus, this is a boat that is leaving the US in 90 days, and once we are in international waters, there won’t be anyone to help us when things go wrong. We’re trying to be somewhat disciplined in our effort to learn all we can about this boat.

There are a couple of things worth noting in the picture above.

1) The fenders are down. Don’t worry – we didn’t forget to pull them in. This was just to get them out of the way. I have giant inflatable fenders. My plan is to deflate them when not in use. We have an air compressor on board to make inflation fast and easy. The inflatable fenders are feather light, extremely durable and are a big hit with all who see them. That said, for now, it is easier to flip them overboard to get them out of the way.

2) There is a ladder coming down from the bow, just in front of the forward fender. When dropping the tender, you are about 12 feet off the water. My son Chris confidently announced that we didn’t need the ladder, as he would easily be able to climb down the side of the boat and into the tender. As you can see, the ladder is in place, and Chris now has a healthier respect for heights.

The first tender dropped was the Zodiac Projet. It’s my first experience with a 2-cycle engine, and I can see why 4-cycle has now taken over the industry. At slow speed it puts out a huge cloud of smoke. It allegedly will run at 40+ knots, but in my trials yesterday, at about 20 knots it acts like it is out of fuel, and I have to restart the engine. Another thing to add to the list…

Dropping the tender was amazingly simple. On our prior boat we were never really happy with the davit (the crane used for raising and lowering the tender). We had a 1,500 pound capacity davit that seemed to have a heck of a time lifting our 1,100 pound tender. It make screeching noises like it was about to fall apart, and we didn’t have a ladder like we do now. Once the tender was in the water, it would be dangling from the davit at the bow, 20 feet in front of the nearest point of access. Other than swimming, the only way to get someone into the tender was to drop it most of the way, have someone climb down into it, and then lower it the rest of the way. This was unsafe and not something we should have done, and not something I would do today. For this boat, one of our “must have” items was a powerful davit. Thus, we installed a Marquipt 2,500 pound davit, which lifted the Projet like it wasn’t there. This, combined with the ladder for climbing down, has made me a very happy (and, much safer) guy.

Roberta made tacos for our first dinner at anchor. Her parents, and our son, are on board. We set up for dinner on the outside upper aft deck, even though it was cold and windy. Since it was our first ever dinner at anchor, I wanted the experience to be as special as possible. We broke out the good dishes, the crystal wine glasses, even the fancy silverware (that we NEVER get to eat with). There were a few grumbles from our guests as I explained they’d have to wear a jacket to dinner. As I was carrying things up to the back deck, the wind was rising. At 19.7 knots of wind, one of Roberta’s good plates, which I had placed in position just minutes before, crashed to the deck, and luckily didn’t break. That ended the dreams of dinner on the back deck. We still enjoyed dinner, but at the dining room table in the main salon. Dinner on the back deck shall have to wait until the boat is farther south.

The wind became a factor again later when we went in the hot tub. Filling the hot tub was simple. We carry 500 gallons of water, and the hot tub uses around 200. I topped off the water again using the water makers. We heated the water using the Kabola furnace, which also went smoothly. Going in the hot tub should have been, but was not perfect. The weather projections were for no more than 10 knot winds, but as usual, the weather gods seem to do whatever they want, regardless of the forecast. Any body parts poking above the waterline were quickly miserable.

As evening set in I had to make a decision: run the generator, and have a wealth of electricity over night, but put up with the sound of the generator running, or kill the generator and let the batteries power the boat. Our battery bank is sized to be more than adequate for overnights at anchor. That said, I don’t believe anything until I’ve tested it in actual usage. I was tired, and feeling lazy, so my gut said to just leave the generator running, and do the testing on another night. But, the decision was complicated because I was running the 25kw generator. We have a big (25kw) and a small (16kw) generator. The small generator is a long way from the staterooms, and barely audible. The big generator is much closer, and much louder (although still not really bad – just loud enough to be annoying if you are trying to sleep). Unfortunately, while doing some load testing a few days ago I managed to blow some fuses. Even more unfortunately, the particular fuses that I blew are required for the small generator to run, and I’m having a hard time hunting down new ones. Thus, until I get to a bigger city, I am stuck with the big generator. I still wanted to put off trying to run all night on batteries, and had just made the decision to let the 25kw generator run all night, when I noticed the load – 10 amps (at 240 volts). Generators like to have a load which is somewhere close to their rated output. Under-loading, or over-loading, a generator is not a good thing. The big generator wants a big load; like 100 amps, and would be quite disappointed to find only a 10 amp requirement. The writing was on the wall. This would be a good night to test running on the batteries.

Two events converged to insure that my first night at anchor would be “restless.”

1) Because I didn’t know if the batteries would really last all night, I wanted to watch them through the night to see how long they would last without being charged. On many smaller boats, nothing is going while you sleep except an anchor light. On this boat, there are water pumps that kick in from time to time, two refrigerators, two freezer drawers, a BIG freezer, the circulation water pump for the water heating, the wine cooler, the dvd jukebox (Kaleidescape), the computers, the radar and more.

2) The high wind earlier in the evening caught me by surprise. It wasn’t in the forecast, but it had been there anyhow. As we were turning in, the wind had died completely, and we had enough chain out to withstand most hurricanes. But, with a new boat, and a new anchor, I thought it might be smarter to monitor things closely.

This all adds up to what I call “anchor watch”. I set my clock hourly, and each time it goes off I take a quick look around, and assuming the boat hasn’t moved, or the batteries died, I get to go back to sleep. In actuality, I was 99% certain there was no need for anchor watch, so I cheated and set my clock to go off every two hours. As expected, the batteries not only lasted all night, the indications are that I could have easily gone another six to eight hours. And, not only did the anchor hold, the wind never came back, and the anchor chain hung straight down all night. Our next time at anchor will be much more relaxing.

This morning, I wanted to lower the other tender: “the big tender”. I quickly discovered that the bridle required to lift it off the deck was missing. I put in calls to Nordhavn, but given that it was raining, I decided to put the small tender back on the deck, and head for port. As we were heading back, I received the call from Nordhavn. The lifting bridle for the big tender was there all along, and I’d been looking right at it. I saw a blue plastic line, which looked like fender line, or a line for pulling skiers. That was it! It didn’t even vaguely look strong enough to lift a tender, but I guess it is spectra (or, something like that) and is as strong as steel. Oh well. I learned something, and that’s what this month is all about…

Our return to port was without incident, and even parking the boat went well. Overall it was an uneventful trip, and that’s exactly what I wanted! Our next time out we’ll be more adventurous.

PS I’ve received a lot of email asking what we would or wouldn’t do again, if we had it to do all over again. We only took delivery of the boat a week ago, and are just starting to learn it, so I don’t really know the answer to this question. Here are a few “off the top of my head” thoughts. If there is something more specific you’d like to know, email me, at: kenw @ seanet.com.