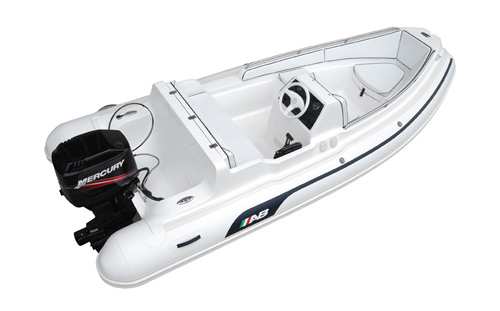 Today was a lazy day, just enjoying life at anchor.

My “big project” for the day was to drop the tender. We could see a dozen little restaurants along the beach and thought it would be fun just to tender to shore and explore. I put out a call on the radio asking if anyone knew if there was a tender dock. I was answered by Chuck, on Jacaranda, who advised that there is no tender dock, and that I should be very careful. The waves break on the beach, and he had seen a tender flip, with injuries, on his last visit to the bay.

Given this warning, I tendered close to shore to check things out. Conditions were calm, yet there were breaking waves everywhere. They weren’t breaking badly, and I was fairly sure we could make it – but, Roberta’s parents are in their 80s, so I knew it needed to be a soft landing.

Our tender isn’t made to be beached, which is a problem. In an earlier blog update I mentioned this, and one of the readers suggested I try an “anchor buddy.” It’s just an anchor line which is made of bungee cord. I’ve never used it, but if I understand correctly, the idea is that you:

a) Drop anchor about 50 feet off the beach
b) Power the tender to shore, stretching the bungee cord
c) Step onto the beach
d) Let go of the boat You need a long rope attached to the tender, so that you can pull it to the beach later to step back on. The Anchor Buddy is really intended for dealing with tides, but I thought it might work in this situation. I went back to Sans Souci, and loaded Roberta and her parents.

Arriving back at the beach, I realized that my idea had been a poor one. There was no way to get the tender close enough to shore to allow everyone to step out. The swells for the waves were starting over 50 feet from shore, and by the time I would be close enough to be in a couple feet of water, I would be dragged to the beach whether I liked it or not.

Had it been just Roberta and I, we would have just dropped anchor (on the tender) and swam it to shore. I might even have been able to make the anchor buddy thing work – but, clearly Roberta’s parents weren’t going to be able to wade, or swim, through the waves.

Never one to give up, we trolled along shore looking for someone with a panga who might be bribed into coming out to get us. At first we thought we had failed, but then one Mexican gentleman, who was swimming with his son, noted our struggle and signaled me over. Roberta explained in Spanish that we needed a panga ride to the beach, and he seemed to understand. I tied to a nearby mooring buoy and 10 minutes later we were walking on the beach.

We chose a restaurant, Manuelita’s, and to our surprise, had a great meal! Roberta even made the comment that it was the first day that it really felt like we had “arrived.”

While having lunch, we saw a couple arrive from a sailboat, and we understood the proper way to handle tendering in. Their tender was small, and had wheels on the back that could be flipped down. They hovered, watching for a break in the waves, and then ran the boat fast to the beach. When the tender reached shore, the wheels touched sand, allowing them to jump out, and easily roll the tender up on the beach.

This explains the expensive tender that we had seen left behind in Puerto Vallarta. I don’t know yet that I am willing to pitch my expensive tender overboard, and buy a lighter tender with wheels, but I’ve started thinking about it.

Although our meal was excellent, it was not paced for someone in a hurry. I had told our panga captain to expect 90 minutes. Sixty minutes into our meal I realized we hadn’t received our salads yet, much less our main courses. It was going to be at least another hour. Thus I hiked back down the beach to give a few more dollars to the panga man, and advise him of the delay. He expected my gratitude, but looked very unhappy.

After completing our meal, and hiking back to the panga, we could see why. The wind was coming up!

Getting into the panga and getting it off the beach was a major effort. The wind was picking starting to pick up speed rapidly, and when we stepped onto Sans Souci the wind was over 20 knots. The swell was also picking up, and our flopper stoppers were doing the best they could, but Sans Souci was rolling non-stop. It would be an uncomfortable night.

As dusk was settling in, we noticed another Nordhavn, a 50 called “Sally G,” pulling into the anchorage. After they had dropped anchor I called on the radio to introduce ourselves. I asked where they had come from, and Dave, the owner, said “San Carlos.” The only San Carlos I knew about was 600 miles north, so I assumed I had misunderstood him, but I hadn’t. He had run non-stop from San Carlos! Dave said he was en route to Zihuatenejo, another 300 miles south, and had given up 3.5 days into his 5 day journey after being beaten up all night by rough seas between Cabo Corrientes and Chamela (see yesterday’s update). I asked how rough, and he said “35 knot winds, and seas as high as 15 feet!” I then asked “Why are you in such a hurry to get to Zihautenejo?” And, the answer caught me completely by surprise. “We are planning a trip to the south pacific, and wanted to see how we would do on a long passage with just the two of us.”

Nordhavn owners are always finding new ways to surprise and amaze me!