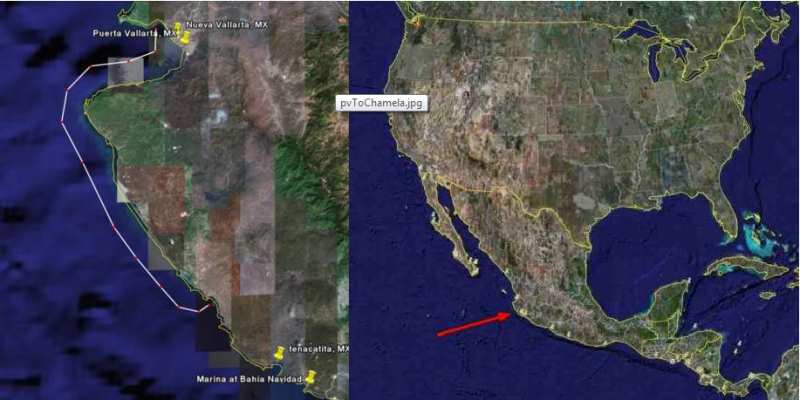 I planned our voyage based on a 12 hour trip from Puerto Vallarta to the anchorage at Chamela Bay, 100 miles south. In other words, to arrive at 3pm, we would need to leave Puerto Vallarta at 3am. This would allow us to grab a few hours of sleep, and still arrive before dark, with time to spare, in Chamela.

In order to simplify the night-time departure we decided to move the boat to anchor outside the marina. We would drop anchor as the “outer most” boat, so that we wouldn’t have to zigzag through other boats in the dark.

First though, I needed to clear out with the port captain. Unfortunately, I had forgotten that the La Cruz port captain’s office closes on Sundays. I put out a call on the radio to other cruisers in the area, as to whether or not this would be a problem, and the consensus was that I should go ahead and go, and beg for mercy with the Port Captain at our next major port of call (which will be the marina at Barra Navidad). I looked in the cruising guides to see if I could find the phone number for the Port Captain’s office in Puerto Vallarta. We were in La Cruz de Huantacaxtle, a smaller city, and I was guessing that nearby Puerto Vallarta might have a larger office, which could be open on Sunday. I couldn’t find a phone number, but did find a VHF radio channel: 13. So, I called on 13 for “Puerto Vallarta Port Captain”, and back came a Spanish voice that said “Adelante Sans Souci” (Go ahead). I explained that I needed to clear out, and the local office was closed, and could I do it over the radio. The voice on the radio asked the name of my boat (in Spanish), and the number of persons onboard (again, in Spanish). They then said they would pass on the message. So, perhaps I have cleared out….

Another couple of boats; Jenny, a Nordhavn 46 and Wandering Star, a Selene 43, had spoken about leaving at the same time as us. Unfortunately, there is no practical way for us to travel as a fleet. Sans Souci is capable of traveling at 10.5 knots, whereas these boats max out at around 7.5 knots. For fuel conservation, we generally travel closer to 9 knots, and I’d guess these other boats travel closer to 6 knots. In other words, the trip which would be 12 hours for us, would really be closer to 18 hours for these slower boats. If we really wanted to travel together I could certainly slow down; I’d save a lot of fuel, and have someone to talk to on the radio the entire way. But, this wasn’t likely. I wanted to get there. On the Fubar we found that by leaving a few hours after the slower boats we could remain in radio contact for much of the voyage.

It was not to matter anyhow. When I spoke with David on Jenny, he had made the decision to spend a few more days in La Cruz. I couldn’t blame him We should have allowed for a month or more in the Puerto Vallarta area. Then, the Salzers, from Wandering Star, stopped by the boat to let us know they also would not be going. We had been waiting for the wind to subside so we could leave the port, and it had already gotten to 4pm and we were still showing 12 knots of wind inside the marina. The Salzers said that the weather would be much better towards the end of the week, and they wanted to wait for a smoother ride.

If we were to depart, I had only about 90 minutes to make a decision. Whenever anyone mentions a weather delay, this becomes a giant red flag. I hadn’t noticed anything in the forecast which indicated trouble ahead. This called for an immediate call to “weather Bob” our weather router. The bottom line on the weather, from Bob, was that we were likely to see 15 to 20 knots of wind, with six foot swells (waves). Importantly, the swells would average 16 seconds apart. Longer swell times mean the boat has more time to gently ride up one wave before tackling the next one. Nothing here meant “don’t go.” However, as the Salzers had indicated, the seas would be calming on Friday, and if we waited, we’d have a much smoother trip. After speaking about it, we decided “let’s go.”

Step 1 was to get out of the marina, and the wind was not co-operating. It was climbing when it was supposed to be lowering. 13 knots of wind was not enough to really interfere with maneuvering out of the marina, so we went for it, and left port perfectly. Outside the port there was 18 knots of wind, which made anchoring a bit more interesting, but still not a problem. We anchored away from the pack for an easy departure.

At 2:30am Roberta and I woke and started pulling anchor. So that I could see, we shined the spotlight at the bow. We then followed our own tracings on Nobletec to exit Banderas Bay.

Cabo Corrientes, the south eastern point at the mouth of Banderas Bay (the bay with Puerto Vallarta) can be rough. One cruising guide advised staying five miles off the point, and said that even at that distance the seas had resembled the water in a washing machine. We were in calm seas, with only 5 knots of wind, so I wasn’t at all worried. Our route was planned to take us five miles off the point, and Roberta steered the boat an extra mile out to sea “just to be safe.” I wouldn’t call the seas rough, but I would call them “confused.” There was no obvious pattern to the seas, and the swells (lumps in the water), randomly placed, moving, close together, and perhaps four feet tall. We swished around for a couple hours, but overall it was anti-climatic (which is a great thing!)

As we continued southeast, I noticed that 1325 rpm, which generally moves us at 9.5 knots was instead giving us an “uncomfortable” 7.5 knots. The wind was coming at us on the port side stern, and had climbed to 12 knots, and the swells were coming at us from starboard side stern. I remember that on our prior boat, a Nordhavn 62, that when swells are coming from behind, the auto pilot tended to over-react and make for a bad ride. My hopes that this boat would be better were not rewarded. Each time that the stern would be pushed sideways by a swell, the boat would over steer to correct, and push itself too far the other direction. I kept seeing the words “rudder limit reached” appear on the auto pilot. I thought about trying to reprogram the auto-pilot, but I have a rule that “unless I really know what I am doing,” I don’t mess with things while underway. We were uncomfortable, but overall, we were moving the right direction.

After a few hours of not picking up speed, I decided to use the sat phone and call the owner of the second Nordhavn 68, David. I was trying to figure if it was the zigzagging causing the loss of speed, or if there was an adverse current. David had something I did not – access to a fast internet connection. I was hoping he could do a little research and tell me what the current might be. Our navigation software (Nobeltec) allegedly has current information, but we are truly in the boondocks here, and if Nobeltec had the information, I couldn’t figure how to get it. David did some googling with no greater success than I.

I decided to “put the pedal to the metal” and stepped it up to 1400 rpm. We briefly moved up to 8 knots, and even saw 9 knots for a bit, but still had long periods where we ran as slow as 6.9 knots. Our fuel burn had grown from 13 gph to 18 gph with only a marginal speed increase. I thought about dialing in more speed, but it was clear the payback wasn’t justifying the cost. At almost exactly the mid-point of our run I passed a north bound sailboat motoring north (I keep referring to it as north and south — but, if you look at a map, what I am calling south is more east than south). The sailboat was named Cyrano, and I could see that he was getting slammed. I was still curious about the current, so I called him on the radio to ask what he thought. I told him it felt like there was at least a knot, or even two of adverse current. He responded “At least!” I’m still not 100% certain, but hope that he was right.

At 4:30pm we dropped anchor in Chamela Bay, well before dark. The bay is much larger than expected; 4 miles long by a mile deep. There are two large islands in the center which divide it in half. At the tip of the north end of the bay there is a village with a row of what appears to be ocean front restaurants. About 20 boats are in the anchorage. We dropped anchor, and then, even though exhausted, proceeded to drop the “flopper stoppers.” Cyrano, the northbound sailboat, had advised me that the anchorage had a lot of swell (meaning: the boat would constantly be in motion at anchor). For those not familiar with Flopper Stoppers, these look like giant fishing poles which hang out the side of the boat, each dangling a giant aluminum plate beneath the water. The theory is that these will stabilize the boat and make life much more comfortable. We’ve only put them out a couple of times thus far, and the process isn’t easy. There are five ropes per side, and only one rope is labeled (Note to self: remember to label them!) The first took a lot of experimentation and 45 minutes, the second took less than 10 minutes.

We barbecued some hamburgers, and were going to settle in when the President’s State of the Union speech started (we have sat tv). We decided to watch it, and within minutes all four of us were asleep on the couch. When I awoke the speech was over. I woke the rest of the group, and sent everyone off to bed….

Here’s a picture of Roberta’s parents having breakfast this morning. You can see the flopper stopper in the background.

PS As always – I welcome email, but – watch the size! I’m back on a $6 per minute connection….) I haven’t had time yet to read yesterday’s email, so I’m not including any email with today’s posting.