Update #4 – off the Columbia River in Oregon 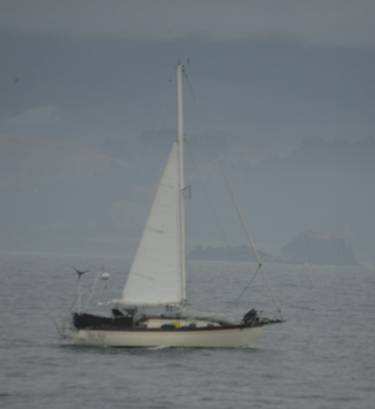 We’re running north, just above the entrance to the Columbia River, following the coast staying three to four miles off shore. The water has been calm the last 24 hours. It’s almost tough to believe that this gentle body of water, that we’re now sliding along on peacefully, is somehow related to the agitated sea that was so problematic during the first three days of our journey. The weather is projected to be great for the rest of our trip, and everyone’s mood is reflecting this forecast. Someone even said yesterday “I’m really happy we had the rough seas. It was a really interesting experience”. Don’t worry: I did not pitch them overboard.

The last 24 hours have been very uneventful. Everyone’s schedules were a little confused yesterday by our night in Crescent City. My goal has been to arrange the watch schedules such that everyone has the same shift every day, and can adjust their sleep schedule accordingly. An unfortunate side effect of our all getting a good nights rest at the dock in Crescent City is that everyone was back on the same sleep schedule (which is a bad thing). We need to get back into the rhythm of life on the ship….

This boat passed us close on our starboard side, with nobody visible on deck. I’m positive they never saw us. Perhaps this captain had been paying attention and just snuck downstairs for a restroom break. I don’t know. I often see sailboats unlit (especially at anchor) or very dimly lit. When running at night, especially if the seas are rough, it is easy for a small blip to hide on the radar. Jeff had a good line yesterday. He said “Your two most valuable assets while standing watch are right between your ears.” He was referring to our eyes. We’ve made it a priority to completely darken the pilot house, and dim the instruments, while running at night, and to take the time to step outside to look through the binoculars at anything suspicious.

Last night while Roberta and I were standing watch, I heard loud screams coming from the mail salon. The guys were watching a horror movie, with the sound cranked way up. A couple of things worth noting in this picture:
1) To keep the chairs from becoming missiles during heavy seas we have velvet ropes which bind the chairs to the table. The table is also anchored from the bottom to the floor. The straps are ugly, but better than flying furniture.
2) The chandelier over the dining room table is missing. It was damaged during commissioning. We’ll fix that.

Someone sent me a link to an article about our old boat!

The first Sans Souci (our Nordhavn 62) was bought by the Icelandic singer “Bjork”, who painted it black. I had heard this, but thought it might look horrible. It really doesn’t look that bad. Since we sold the boat, it has been to Croatia, Malta, back across the Atlantic, and is now in Manhattan. I’m happy to see it is getting used! I have also heard that Bjork renamed the boat to “Dimma” (which may or may not be true). I hope this rumor is true. I’d like there to only be one “Sans Souci” within the Nordhavn world.

Several people have written to ask how the ride on our new 68 compares to the 62. The honest answer is “I don’t know.” I think the 68 is much smoother, but would really need to be on the same water, on the same day, to say. We were in rough seas a couple of days ago, and handled it just fine in this boat. Our 62 had a tendency to “burry the bow” or slap the water hard, when coming off a serious wave. This boat is as smooth as silk.

Clearly, this (the 68) is the simpler to operate boat. I’m already more comfortable running this boat than I ever was with the 62. Much of that has to do with:

1) Beefier thrusters: 35hp bow and stern thrusters vs 15hp on our 62
2) Twin engines vs single. Anyone watching me side step perfectly in and out of the fuel dock, yesterday, would be very jealous. This is an exceptionally maneuverable boat.


Attached is a spreadsheet anyone considering buying a larger Nordhavn will find quite interesting.

One word of advice before you look at it: These numbers were tough to compute. I had to go through a few contortions to arrive at the numbers, and undoubtedly made a mistake or two along the way. If so, I apologize. My goal with this spreadsheet was to compare the sizes of the different Nordhavn models. I was talking to someone who had a Nordhavn 64 on order and was agonizing over whether to upgrade to a N68. This spreadsheet helped him with his analysis. The numbers actually surprised me. They basically showed that the 64 and the 68 have roughly the same size interior, but that you get significantly more engine room space and exterior decks. Of greater personal interest were the numbers comparing the 68 to the 62. I realize this is boring for most people, so I’ll only spend another sentence or two on this topic. The funny thing about comparing the 62 and the 68 is that they have essentially the same footprint. The 62 is a misunderstood boat. The overall length on our 62 was over 70 feet. It has a bulbous bow in the front, and virtually all 62s have a stern bustle in the back. I would be surprised if there is a difference of more than a foot in the length of our old 62 and our new 68. There is a slight difference (1 foot) in the width (beam). The bottom line is that you need roughly the same size parking place for a 62 or a 68, but the attached spreadsheet tells a completely different story. According to my stats, the 68, as compared to the 62, is:

Someday when I have absolutely nothing to do, I’ll give thought to how these stats are possible. For now, I’m just enjoying the extra space.

I do not want to leave this topic with anyone having the wrong impression. I am a solid fan of the 62, and will always be nostalgic for ours. It’s a great boat, and one I would own again without hesitation.

On to more interesting topics…

I promised to talk about things I would or wouldn’t do again on the boat. I haven’t, because I’m still trying to sort that out in my own mind. As of now, I can’t really think of anything. The layout of the boat seems perfect. The master stateroom is HUGE and very comfortable. The engine room is far more spacious than I had expected. The lazarette is cramped, but there’s nothing in it I wouldn’t buy again. The entertainment systems are a huge hit on the boat. Roberta and I were watching TV in bed last night, and Roberta said “It’s like having our own theater!” The electronics are the only area where I think short-term I’ll make some major changes.

Our primary navigation software is Maxsea. It has a steep learning curve and requires a computer keyboard. We also have Furuno’s NavNet system. NavNet is a simpler system and uses its own dedicated control panel. No one, myself included, is comfortable using Maxsea. NavNet looks clunky, but is easy to use. What I really want is a program with Maxsea’s power, but simple to use and with a special purpose control panel, like NavNet has. One thing I don’t like about Navnet: is that it uses vector charts, rather than raster charts. I don’t know how I can explain the distinction without putting everyone to sleep, but will try. Vector charts are computer generated charts, whereas raster charts are simple reproductions of paper charts. Perhaps I’m old fashioned, but I don’t trust the vector charts. The paper charts have lots of footnotes and little details which give critical information. All of this may also appear on vector charts, but I’m used to doing it the old way, and want a computer program that comes as close as possible to doing what feels most comfortable to me.

My last thought for the day: The Sirius / Furuno weather system is incredible. I’m tough to impress, but was blown away by the weather system on Navnet. It’s a little clunky, and feels like first generation software, but everyone on this boat figured it out quickly, and uses it constantly. You just click at a place on the map, and immediately get the weather report.

PS Several people wrote asking what a day onboard is like. I’m out of time for today, but will address this tomorrow