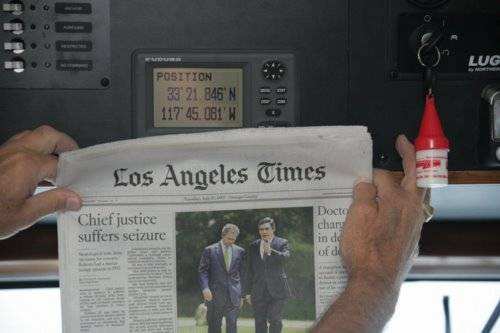 Greetings everyone! Today’s update is light on words, and heavy on pictures….

As I type this, we’re departing from Crescent City where we stopped for the night. Our stated purpose for the stop was to take on fuel, but the real reason was that we were all pretty tired and wanted a good night’s sleep.

Before I describe the past few days, I just noticed this picture in my camera, and thought I’d share it. It was taken when I “took delivery” of the boat. For those who don’t realize what this is, it proves that the boat was sold to me outside California. We had to take the boat five miles offshore before making the final payment, and signing all the paperwork. The GPS shows our location, and the newspaper proves the date of delivery.

Sunday evening was a wild ride. We were slammed by 35 knot gusts, and steady 25 knot head winds. On a zero-visibility night (no moon), it can be a might spooky. The boat did fine, but I’d be less than honest if I were to claim it was fun.

In fact, it reminded me of a conversation Roberta and I had at the end of our Atlantic Crossing in 2004 At the time I said that my maximum run from now on would be five days. I said that I never wanted to cross another ocean. My plan was to use delivery crews for longer runs. I’ve always said that I like everything about boating, except the boating. Multiple day passages are really not that much fun.

A side story on this topic: One of the crew onboard is here because he has considered buying a Nordhavn for him and his wife to live aboard much of the year. He wanted to see what a long passage might be like. After three days of pounding, he was looking a bit shell-shocked, so I asked him “How are you feeling about boating now? Are you accomplishing your goals for being here?” His response (which came as we lurched our way through another wave): was: “I don’t think my wife would like this.” That really depressed me. I spent the next 30 minutes explaining to him that long passages are not really what boating is all about.

For instance, we are planning to circumnavigate, but I prefer to think of it as “hubbing”. At the start of each year’s cruising, we’ll have the boat delivered to some wonderful new location, and then once the boat is in place, we’ll consider that location our hub for the six months or so that we cruise the region. People always seem a little let down after I say that we are planning to circumnavigate, because they always ask how long we’ll take, and I always respond “I don’t know. Ten years maybe? Our plan is to hang out at each place until bored, and then go to a new place. If we get to a place, and don’t like it, or if we think it is dangerous, we’ll go to the next place. We have no schedule and no clear itinerary” Most people’s vision of circumnavigation is a bearded sailor being pounded by the waves, standing on the back of his sailboat in the rain, trying to make it around the world in the least number of months possible. I on the other hand, have no beard, and do not particularly like standing in the rain. Our goal for this journey is to be in the best places, at the best times. The bottom line: we are doing this for fun, not work.

Overall, our passage north is going amazingly well, although I did phone Dan Streech, Nordhavn’s President, to ask about one problem we were battling: The boat has been constantly listing to the right (starboard). We were having trouble getting the boat to sit straight in the water. Only sail-boaters are accustomed to going through life at a 10 degree angle. We tried moving the fuel from tank to tank, in order to get the boat straightened up, ultimately successfully, but after a bit of work. Dan sent this email in response to my call

Hi again Ken. Since our conversation yesterday, I have talked to Justin and Mike and I think that I know what is going on with the fuel/trim situation. You were told to run with “all valves open” for both main tanks (the two engine room tanks). This is an OK configuration most of the time, but there is a phenomenon in which if there is a wind induced heel, the fuel can migrate from one tank to the other via the day tank (from the windward side to the leeward side). As you burn off fuel, the situation is exacerbated as the wind induced heel is increased by the growing weight imbalance.

The northbound trips on the west coast are almost always plagued by the incessant, hateful northwesterlys- giving you a wind heel to starboard. In retrospect, we should have told you to run from one tank at a time- starting with the starboard tank.

Another way to approach the solution is to use the stabilizers to correct to zero heel- thus stopping the fuel migration phenomenon. That however is a rather crude way to do it and causes unnecessary drag.

Another complication is that your boat has the “emergency fuel shut off manifold” located outside of the engine room. This is a carryover from the boats which were built to European CE requirements and isn’t required on boats built to American/ABYC specs. So, Justin and Mike’s thinking was to leave “all valves open” on the emergency manifold and control the tanks with the valves at the tanks themselves.

So, at this point, you should:

· Open all valves at the emergency shut off manifold.

· Close the forward fuel tank valve at the tank

· Close the port fuel tank valve at the tank

· Open the starboard fuel tank valve at the tank

· Return fuel only to the day tank

You will begin consuming fuel from only the stb tank and the trim problem will improve at you burn off fuel. Despite what I said above, you could go ahead and straighten the boat up immediately using the stabilizers. It would be an interesting experience to see the average fin position slowly move towards zero as you burn off fuel.

To straighten the boat up more quickly with weight, you could also:

· Return engine fuel to the port tank or

· Transfer fuel from the starboard tank to the port tank

However, at this point while you are still at sea, I think that we should stick to a sure thing and not try to move fuel around. As fatigue and sea sickness take their toll, it is best to do as little manipulation of the fuel valves as possible.

Sorry for the mix-up and great job on the passage so far.
Rgds,
– Dan

Yesterday (Monday) morning, the seas were calm for a bit, before deciding to mess with again as we rounded Cape Mendocino. These two pictures were taken only about 30 minutes apart. The seas look worse than they were. We hardly felt this.

Although the boat did fine, and we did fine, Shelby (our dog) was very happy to see land. She is accustomed to using the cockpit on the boat as a restroom, but we were in heavy enough waves that the cockpit was usually flooded, and taking spray. Shelby made a valiant effort, but as you can see here, she was somewhat depressed. Don’t worry: Seconds after this picture she was wearing a huge smile.

You can’t tell it in this picture, but Sans Souci looked somewhat out of place in the marina. 500 fishing boats, and: us.

Entering the marina was an “adventure”. We came in at 2am, exhausted. It’s an easy entrance to the harbor during the day, but at night, when you haven’t been there before, it’s a much different experience. I ran the boat, and was watching the depth gauge, while winding my way through a maze of buoys and intently watching the depth gauge (which briefly had the number “1.3” on it, causing me great concern).

While waiting for the fuel dock to be empty Roberta and I hiked around town. I’ve always said that time at anchor is what makes it all worthwhile, but a close second would be the chance to visit new places and meet new people. Roberta and I really enjoy arriving at a marina and hiking around just exploring a new place. The little diner you see in this photos sits in front of a large trailer park, and the parking lot for the marina. It had all the earmarks of a place which knows how to make a great breakfast (which proved to be accurate).

At 2pm today, we left Crescent City, bound for Roche Harbor (near Victoria Canada, on San Juan Island). It will be a 2.5 day passage, putting us into Roche Harbor late at night on Wednesday. On departure we were surrounded by whales, including one who kept breaching along side our boat. Somehow the whales were able to detect when I had my camera out and would hide beneath the water until I put the camera away before resuming their show.

Here are a couple of pictures of our crew: This is Captain Jeff Sanson, and Tyson Buchmeier taking their turn at the wheel. Roberta and I will run the boat alone ordinarily, but for long passages I like as many people onboard as possible. We’re running three two-person teams, each on twice-a-day four hour shifts. One person is designated as “driver” and the other person’s job is to fetch food or drinks, backup the driver during biologic breaks, do engine room checks (hourly) and keep the driver awake / entertained.

Here’s what modern mariners really do at sea on long passages: (Roberta with Dwight Knechtel). Yes – there really are four laptops on that table.

For those of you who are numerically inclined, here are the stats on our journey thus far:

I am always happy to answer questions about the boat, or boating in general.

If you have questions, email them to me, at: kenw @ seanet.com

If you were routed this email by someone else, and would like your own subscription to my blog, go to http://www.kensblog.com/Click the subscribe button.

If you find these emails of mine annoying, and wish I’d stop polluting your mailbox, see the information below on “un-subscribing”.