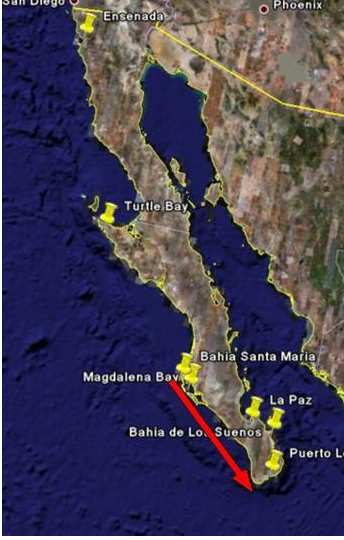 When it came time to make the decision on a second day at Mag Bay fishing, or continuing south to Cabo, my first thought was to see if a win-win was possible, and it was. On Wednesday morning, we departed Bahia Santa Maria for Cabo San Lucas with the intent of fishing our way south. It’s “only” a 190 mile run and we would have the wind behind us, so I was thinking it would take approximately 22 hours. My plan for the trip looked something like this: “We’ll spend six hours or so fishing, and arrive about four hours after our departure time the next day”. I hadn’t decided yet exactly where we would be going. We had a slip waiting at the Puerto Los Cabos marina in San Jose Del Cabo, but when I gave the group the option of stopping in Cabo San Lucas for a day, there was unanimous agreement that this would be fun. We decided to see what mood we were in when we reached the cape and either stop in Cabo for the night or continue up to San Jose.

Our fishing goal for the day was clear. We had caught a Wahoo and a Dorado the prior day. Our focus was on snagging a marlin. Channel 65 on VHF was designated as the fishing channel, and reports rolled-in non-stop of fish being caught, and locations. We were also watching the AIS (a system that identifies boats and their locations) to see where people were fishing, and whether or not they were catching anything. The boat “Fish and Game Warden” was the first I heard report catching a marlin. We were loosely working our way south while looking for fish, and hadn’t run an hour when Jeremy shouted from downstairs “FISH ON!!!!!” We had agreed previously that my son Chris could have the first marlin. Chris had never fished before and had no idea what this meant, or what was involved, but Jeremy is a good teacher.

I’m not a fisherman, but have heard stories of four to six hour battles to bring in a marlin. I don’t know if Chris did something right, or if we picked a particularly lazy fish, but Chris’ capture of the fish took only about 30-45 minutes from when the fish first grabbed the lure to when he was lying on my back deck.

It was very classy of Jeremy to let Chris bring in the first marlin, and perhaps a bit foolish. Jeremy is a serious fisher-guy and I now understand that catching a marlin is a very big deal for those who are into fishing. We spent the next four hours in the quest for another marlin, but struck out. I felt bad, and Jeremy was a good sport, but you could tell that he was depressed.

I knew of one other boat that would be making the run to Cabo a day before the rest of the fleet, but had made no plans to run with them. I expected that we would be running alone. That’s not quite how it worked out. As it started becoming dusk I looked around and there were still a lot of boats with us. We had 13 boats on the radar. A couple were not with the Fubar, but the rest were. This cheered me up a bit in that I had felt like a mutineer splitting off from the Fubar pack.

Our run was exhausting. I usually enjoy overnight runs, but this time, I was exhausted. It was our third overnight run in a five day period, and whereas if you are on a major passage your body has time to adjust to the schedule, we haven’t been running consistently. Normally, there would be a firm schedule established and everyone would know when they would be running, and when they can sleep. Instead, we did make an effort to set hours, but on a 24 hour run, things don’t have time to settle in. Everyone was awake all day, and no one settled down until Jeremy and I took the helm for our 10pm to 2am shift.

The upper deck on Sans Souci, the “Fly Bridge”, is not enclosed. It is covered, but you are completely exposed to the wind. I’ve been curious how this boat would be to run from the fly bridge, and this was the first time we’ve been in warm enough weather where we could find out. All I can say is “incredible!” To be fair, it may not be as great as it seems, in that we’ve been moving south, with the wind behind us, but overall, the fly bridge is absolutely amazing. You are perched very high on the boat, with a 360 degree view of the world. I experimented at night running from the fly bridge and decided that this would be a great way to run. Inside the pilot house, no matter how hard you try, there is a certain amount of glare on the windshield. We take regular walks around to the front of the pilot house while under way, to see if we can see anything. From the fly bridge at night you have an unobstructed view of the world. You also have fresh air, and the stars to look at. Jeremy and I would have run our shift from the fly bridge, but Jeff chose the settee on the fly bridge to sleep.

The four hours from 10pm to 2am seemed to span about three years. Jeremy and I had logged enough hours on watch that we were starting to run out of stories. At 1:30 I decided I was completely exhausted and made the decision to wake Jeff for the next shift (there are times it is good to be the boss!). To compensate, I set my clock for 4am, but woke at 3am anyhow. We had a lot of targets on the radar. It’s tough to be away from the helm with that much activity. I can bring up the radar on the tv in the master stateroom. After a half hours of watching targets come and go, I couldn’t resist and went back to the pilot house.

Even though there was a lot of traffic it was overall an uneventful evening. We did have a couple of events that I can report. To my starboard, about a mile out, were two Fubar boats. Behind them was approaching a freighter running at twice their speed. One would think that the freighter would alter course to avoid them, but instead in came right at them. The first of the Fubar boats altered course my direction, and the second did a complete circle. I’m not sure why the circle, but it was certainly exciting to watch on the radar.

An hour or so later, we saw a cruise ship on the horizon coming straight at us. The AIS system told me that the cruise ship was named Elation. I’ve tried to contact Freighters and cruise ships before, but usually they ignore us. In this case, I had the boat’s name. I have been told that they are much more likely to answer when you greet them by name. It probably also helps if you are accompanied by 13 other boats and on a collision course. Elation answered immediately, and in a very business-like tone said “We are altering course 5 degrees to port.” I said we would also alter course to port, to provide a safe passing distance.

At 5am we reached the famous arches in Cabo. This was poor timing, as it was dark. This screwed up the picture taking, but that was the least of my problems. Another large cruise ship, and I, were entering the bay at the same time. Meanwhile lots of little fishing pangas were leaving the marina. Adding to the fun was dozens of boats at anchor. We made it in, and found a place to anchor, but it was not easy. We had to anchor a couple of times to find a comfortable spot, and I noticed other Fubar boats having the same problems.

Cabo is a bit of a circus. Lots of activity, jet skiers, parasailing, loud music, etc. It was a lot of fun, but one day was probably enough.

To make a long story short, we found a place, anchored, and had a great day exploring Cabo. I ended the day ashore at my home in San Jose Del Cabo, and have a taxi waiting now to take me back to the boat, for the short 17 mile run north to Puerto Los Cabos. More tomorrow. I’ve got to run!