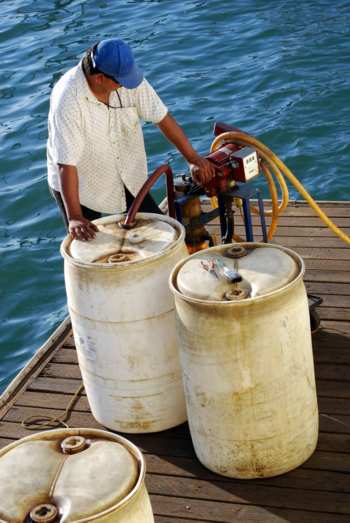 This is it. Tomorrow morning, early, we will cross the border into Mexico.

Today was a fairly light day. I think everyone, on every boat, had last minute errands to do. This was the last chance to buy food prior to entering Mexico (boaters call it provisioning). Things like fresh vegetables had to wait until the last minute, and that minute arrived earlier this evening. It was also the last chance to make any repairs prior to crossing the border.

For Sans Souci, today was a day of refueling, provisioning, cleaning, and last minute fixes. We had a bit of a scare when our diesel furnace suddenly stopped working. It provides hot water for the boat, as well as space heating. On one hand, it wasn’t a big deal, in that we have a backup system, but getting parts in Mexico is difficult. We wanted to get it fixed today, but with all that was going on, it was tough to find time to focus on the repair. Late tonight, Jeff solved it by discovering that a sensor on the hot water tank had failed. A little jiggling got it going, hopefully permanently, but probably not. It was more of a nuisance today than a real issue. I mention it only because it seemed it added a layer of tension that we really didn’t need. The bottom line: We are back to 100% operating status.

I attending a couple of Fubar meetings today. At the first meeting, John Rains, who wrote the Mexico Boating Guide, gave an overview of our upcoming trip. John was introduced as having run the west coast of Baja over 100 times. I arrived at the meeting expecting a site-seeing slide show on Baja, and didn’t bring my charts. Instead, John gave an overview of the days ahead by detailing which islands we should go inside of, and which to go outside of, and which cliffs to hug and which cliffs to avoid. I suspect it was great information, but much of it went over my head. He was speaking about places I’ve never been and couldn’t mentally place on a map. Someone did raise their hand and say “All of these hazards you are describing. Are they on the charts?” John said yes, and I felt much better.

After John spoke, we had a presentation by Bob Jones, a weather router, with Ocean Marine Nav. For those not familiar with weather routers, they are weather “experts” who provide assistance to boaters while under way. These people charge a relatively modest fee, and make predicting the weather much simpler for a boater. You call them, tell you where you are going, and they help you make the critical go/no go decision (sometimes it is better to stay in port for a few days waiting for the weather to improve). The weather routers can also suggest alternate routes to help you avoid bad weather. I know boaters who never use, and don’t really trust, weather routers, preferring to do their own analysis of the available weather data, and I also know boaters who use multiple forecasters to get multiple opinions, and then pick the one they like. The weather itself, of course, uses no weather router, and does whatever it wants. I personally would always use a weather router on any major passage.

Bob Jones’ job should be fairly easy on this trip. He told us what we were all expecting: This should be a comparatively easy run. We have reasonably light winds (under 20 knots), with the wind behind us. For tomorrow’s run he was projecting even lighter winds; 5-10 knots with calm seas (2-4 foot swell, on 20 second intervals). The only negative in the report is that we should expect fog for our departure. This will make leaving port “interesting”.

John Rain’s presentation was intended to give us the big picture of the route south. It was not intended as a detailed briefing. Prior to each leg there will be a captain’s meeting in which the leg will be discussed in intense detail. I attended the captain’s meeting, and was curious to find out how we were going to sequence the boats for the journey. When it appeared this would not be discussed I raised my hand to ask how we would be grouping the boats. Bruce Kessler, our chairman, gave me one of those looks which immediately helped me understand that this was a dumb question. His response: “Ken. This is a 65 mile run. I think everyone can find their way to Ensenada with no problem.” Still not quite understanding, I pushed and said “So, does this mean I can leave whenever I want?” He said: “Absolutely.” Bruce then went on to explain that he was mentally thinking of the rally as getting its “real” start in Ensenada, when we begin the 335 mile run to Turtle Bay. This will be roughly a 36 hour run and require much more planning.

Half of the boats in our group will not be requiring fuel, and half will need to take on fuel whenever possible. I mentioned yesterday that Buddy Bethea, a Nordhavn 55 owner, traversed this same route just last week. Here’s what he had to say about taking on fuel in Ensenada:

“…It is an impressive port with large cranes for cargo ships, and a significant presence of sail and power yachts……but no fuel docks!! Diesel is sold only by the 55 gallon drum, rolled to the boat and pumped a barrel at a time into the tanks! We tied up at the Baja Naval Boat Yard with plans to top off AF with about 600 gallons, however, they could not get more than nine barrels (495 gallons), and for that we had to wait for its arrival by pickup truck at 2 PM! …”

I do not know, but I’m guessing that most, if not all, of the boats requiring fuel, will depart at dawn, in order to get to the fuel as quickly as possible in Ensenada. Bruce Kessler has reassured everyone that adequate fuel will be available, but I know that people will sleep better after the fuel is in their tanks.

We have our own reason for wanting to arrive early in Ensenada. I was supposed to have met with the people from immigration in Ensenada here in San Diego, but because I arrived late, I missed that meeting. I will have more paperwork to do than the other boats, and want to get started early. I also want to get into a slip, and will not really feel comfortable that I have a slip until I am physically in it. Today, my slip assignment switched three times. I started the day assigned to the Cruiseport Marina, had a voice mail that I was now at the Coral Marina, and heard later tonight that I have a nice slip at the Ensenada Marina.

It’s now midnight, and I want to be underway at 6am.

PS As always: If you have friends you think would like to receive our blog updates, sign them up by entering this address into your Internet browser: http://www.fubarodyssey.talkspot.com/aspx/m/335282
Post Views: 266
PrevPrevious PostUpdate # 16 – The Fubar Welcome Dinner
Next PostUpdate # 18 – Fubar-ing in Ensenada MexicoNext