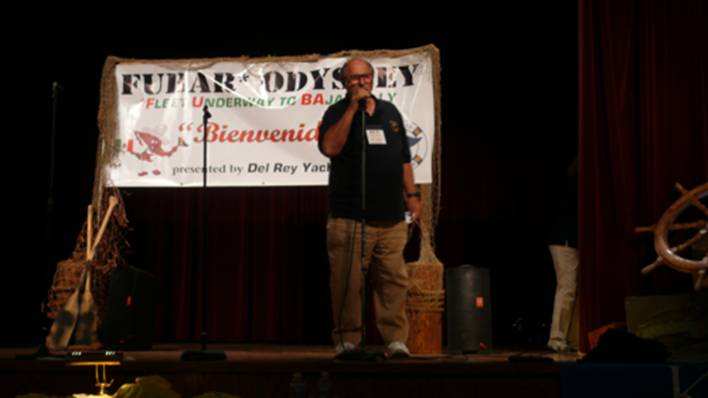 I flew today, from Seattle to San Diego in order to be here for the Fubar Kickoff Dinner.

To be honest, I’m a little late to the party. Most of the boats have already been here for several days doing the various “formalities”. My boat was supposed to be here several days ago, but it has been 60 miles north in Newport Beach getting last minute repairs. Jeff and Jeremy, from Sans Souci’s crew, will be delivering the boat here to San Diego, leaving Newport Beach later tonight, arriving sometime early tomorrow morning.

I’m actually a little worried about some of the things that I missed. They have had a person here the last couple of days from Mexican immigration doing some pre-clearing for the entry to Mexico. I doubt this will be a problem, in that I already have my “Temporary Import Permit” for Mexico, and all my paperwork is in order, but I wish I had been here for that.

They also have had boat inspections the last couple of days. Each boat participating in the Fubar has been inspected. I remember that when I participated in the Atlantic Rally in 2004 we went through this. Given the number of boats, the inspections can’t be too intense. My sense is that they are looking for boats which clearly shouldn’t be making this trip, or who have inadequate safety equipment onboard. If a boat has a serious problem that we can’t resolve, I don’t know what will happen. It would be a nightmare to try to tow a boat 100s of miles. The best way to avoid this is to make sure all boats are seaworthy before starting the trip, and I didn’t hear of any issues, so I assume everyone passed.

I also missed several of the seminars. During the speeches tonight they mentioned that there had been a seminar on Emergency First Aid earlier today. I would like to have taken that. I’ve been through several first aid courses, but it’s the kind of thing you forget, and it’s the kind of thing you should not forget. There are seminars again tomorrow, including one on diesel engine maintenance and I believe they said there would be one talking about what we have ahead of us.

At the start of the speeches tonight two of the three microphones on stage would not work. This lead to someone describing the two dead mikes as “Fubar” which had the audience in stitches. I suspect that this will not be the last time over the next couple weeks that I will something described as “Fubar”.

Legendary Bruce Kessler, Rally Chairman. Bruce was amongst the first power boaters to circumnavigate on his 70′ Delta trawler “Zopilote”

Nathalie Friton, the Managing Editor of Passagemaker Magazine spoke for a few minutes to the group. She did a quick survey of the audience and asked the group something I had been wondering: “Raise your hand if this is your first long distance cruise.” About half of the audience raised their hands. I’m not sure what I would have predicted. Her magazine is based on the east coast, and she commented briefly, half in jest, and half seriously, that she had an observation to make about the difference between east coast and west coast boaters. On the east coast, many boaters run back and forth north to south each year. North in the summer, and south to Florida in the Winter. To do so, they have the inter coastal waterway which provides some protection from the Atlantic Ocean, and fuel can be found about every 45 minutes along the route. By contrast the west coast of Baja has no fuel, no marinas, and no services.

Probably the most noteworthy thing tonight was the size of the group. I would guess there were 250 people in the room! I’m not certain how many people are going on the rally, but we are 52 boats, and I’d guess at an average of four people a boat, thus a number over 200 makes sense. Wow!

With a group this large, it’s hard to get a real sense of the group. With the exception of a handful of people, I really didn’t know anyone in the room. My goal over the next few days is to try to meet some of the other people. Even though half of the group indicated that this was their first long distance voyage, it also means that the other half of the group has already done long-range cruising. My guess is that it is a very experienced group. As to demographics, most of the group seemed in their 50s or 60s, although I also saw some who looked to be in their 70s or older, and some who looked in their 30s or 40s. One cruiser mentioned that he had twin 10 year old daughters along. Most of the boats looked to have two couples aboard.

During dinner I was looking at the pictures of the boats on the rally, and couldn’t resist searching to see what the smallest boat was. On our Atlantic rally, in 2004, it was the smallest boat that had the greatest problems. The smallest boat is “Brown Eyed Girl”, a Skipjack 30, owned by Larry Lucore. As I was about to point it out in the program to my dad, I noticed Mr. Lucore himself sitting at the table across from me.

Being nosey, I asked about his boat, crew, and boating background. First he wanted me to know that the 30’ in the program is slightly exaggerated, and that his boat is really only 28’ long. He also went on to say that he had taken the boat up and down the east coast, around the Bahamas and up and down the west coast of the US. Interestingly he has a home in Mexico, north of Muleje. Roberta and I also live part-time in Mexico and cruised the Bahamas last year in a 28’ boat, so it was fun meeting him. Larry is traveling with two other guys, and although I didn’t ask, they have the look of serious fisherman. These guys know what they are doing, and I am confident they’ll do just fine. Remembering my own 28 footer cruising the Bahamas last year, I had to ask him the most important of questions: “Do you have a shower?” He said “Of course! It’s a little hose on the swim step.” This was very familiar…

The “Captain’s Briefing” is tomorrow afternoon. There is a separate briefing for the Escort Vessels, of which we are one. I asked Bruce Kessler, the rally chairman, when the group would be departing for Ensenada on Wednesday, and he looked at me like it was my decision, not his. He said “When you want to. A lot of people will be leaving at day break.” This caught me off guard, and perhaps I misunderstood him. I had assumed there would be rigid departure times, and that we would do some sort of cool formation for picture taking. I guess not. I’ll know more tomorrow…

That’s it for tonight. It has been a long day, and there is much to do tomorrow.

Before I stop writing though, I should remind people that if you have friends or neighbors who you would like to have receive the daily updates, then you can easily sign them up. To register for my blog updates enter the following address into your web browser:

If your friends are not computer literate, you can sign them up yourself. Just go to the address above and enter their email address. My dad mentioned that he signed up about 10 friends earlier today. Hopefully they won’t mind.

Also: If you have questions about the rally or boating, please send them to me. I’ll respond via my daily update. If I don’t know the answer I can usually find someone who does. My email address is: kenw @ seanet.com When you write to me, I have a spam filter that will respond almost immediately, and ask you to verify that you are a real person who wrote me the email, and not just someone selling something. Simply click the link in the email you are sent, and the email you sent me will go through.

For those of you who are thinking “Hey… this isn’t very exciting.” Don’t worry. Soon we will be crossing into Mexico, and the fun will begin. To put you in the mood, following are a few pictures taken by a friend just days ago by Buddy Bethea, of Always Friday, a Nordhavn 55, on his voyage south along our same course, just a few days ago:

PS Many of you have previously signed up for my personal blog on my own website: http://www.kensblog.com/I received a question today from someone asking if they needed to sign up for the Fubar blog if they are already getting my existing blog. I will be sending the exact same blog to both lists. If you have signed up for one you do not need to sign up for the other. That said, I believe there are others who will also be sending out updates to the “official” Fubar list. Thus, if you don’t object to getting my blog twice in the mail each day, it could make sense to sign up for both.