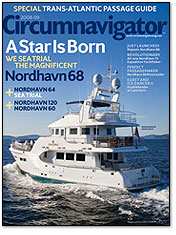 The countdown is on. In just five days, barring weather surprises, fifty-three yachts will depart San Diego on the first leg of our journey to La Paz Mexico. This is an amazing number. If there has ever been a larger long-distance power boat rally, I’m not aware of it. Our goal is to cover the approximate 1,100 mile distance in approximately 16 days, including time in port.

I was asked a few days ago: “Ken. I keep hearing you are going on the Fubar Rally. I know what Fubar means, but what is a rally? Is it a race?”

Although I have participated in one rally (Nordhavn’s Atlantic Rally) and am an escort vessel on the Fubar, I wasn’t exactly sure how to respond, so I looked it up on Wikipedia. The word ‘rally’ had lots of different definitions. All definitions, except the one that pertains to boating, have a lot of great information. For boating, there is only one short sentence: “A long-distance non-competitive ‘race’ or passage-in-company for cruising boats”.

As short as this definition is, only the latter half applies to rallys as I know them. A rally is a “passage in company” for a cruising boat. This ties out with a survey I did a couple months back. I asked all the participants why they were doing the rally, and the #1 response was “because it would be fun to travel with other boats!” The rally itself reflects this goal. Virtually every evening in port or at anchor includes some sort of social event. A lot of long-term (and, long-distance) friendships will be established.

The #2 reason given for rally participation was “Safety.” This is a real issue. I would be very surprised if 100% of the boats that depart San Diego arrive in La Paz without incident. We’ll be moving a collective 56,000 miles (53 boats at 1,100 miles each) along the Pacific coast of Mexico. I know personally that it is very comforting to be surrounded by a group of very smart people. There’s a good chance that if I have a problem I can’t solve, there will be someone who has the knowledge or tool I’m seeking. The west coast of Baja is mostly barren and uninhabited, with essentially no marinas between Ensenada and Cabo San Lucas. Fuel availability is limited and random. It’s a wonderful country, but it can also be a particularly difficult environment if things go wrong. As I said, I’ll be surprised if there aren’t some hic-ups along the way, but I’ll be even more surprised if the entire group doesn’t arrive together.

If I were to add a third item to the list, it would be that it is awesome having someone else research and figure out all the logistics. Entering a foreign country aboard a boat, for the first time, can be intimidating. There are local customs, procedures, currency, legal, language, visa, cultural and other issues which require planning. When participating in a rally, this burden is made simpler for a boater. The rally organizers have worked hard finding space in marinas for the group, arranging for fuel, facilitating customs, etc. This rally has been in the planning phase for over a year. Ultimately, each captain is responsible for his own ship, and shouldn’t just blindly follow the plan as laid out by the rally organizers, but any way you look at it, a rally does make life easier when venturing into unknown waters.

Perhaps there are rallys that are races, but this is clearly not one of them. Every boat on this rally could make the run in under five or six days if they really wanted to, but this trip isn’t about speed. It’s about companionship and safety. It’s about meeting new people to cruise with, adventuring places we might not have otherwise, and moving our skills as boaters up another notch.

Although power boat rallys are a fairly new phenomena, there are sailboat rallys that have been around for a long time. In fact, the Baja HaHa, a sailboat rally with a whopping one hundred seventy-eight boats has just left San Diego this week for Cabo San Lucas. There’s an even bigger sailboat rally, claiming two hundred and forty boats that goes across the Atlantic each year, The ARC Rally.

My boat will be an escort vessel on the Fubar, but I still have a lot of planning and learning to do between now and when we leave port next Wednesday. The logistics of cruising with that large a group puzzles me. I’m not sure how we plan to handle all of the various speed boats. Looking through the list of boats, there are some which probably won’t be comfortable traveling at under 15 knots, and others that won’t be comfortable above 7.5 knots. I know that the rally organizers have this all thought out, and that there is a plan. I just can’t tell you yet that I know what it is.

My short-term focus is on getting last minute repairs made to the boat. Our air conditioning has been fragile (for lack of a better word). In the Pacific Northwest this wasn’t a big deal, but after the rally, as we head south to Costa Rica, the air conditioning will shift from being a “convenience” to a “necessity.” I’ve been getting hourly updates from the boat, on this and a few other items, and all is on track for a 100% operational departure. Starting Monday we’ll be fueling and loading on provisions. On Tuesday there are a series of briefings where we’ll go through all of the logistics, and on Wednesday, we leave the country!

I’m sorry to report that my wife Roberta and our dog Shelby will not be along for the ride. Roberta has been working on a book (non-fiction, about the Irish Immigration), and wanted some quiet time to get some serious writing done. Shelby was forced to choose between the boat and our home in Cabo. I was crushed, but she picked Cabo and Roberta. Oh well…

On the other hand, I’m pleased to report that we will have on board my father Dave, my son Chris, Jeremy Henderson (a Project Manager for Nordhavn), and Jeff Sanson (who oversees the boat when I’m not aboard). Over the next few weeks as I publish my blog updates I’m sure I’ll be referring often to these fine people, so perhaps a quick bit of background on each is worthwhile:

Dave Williams – My father and I have a tremendous relationship. Aside from having known him literally all my life, we have played chess via the internet virtually every afternoon for many many years. He has been struggling with some serious medical issues the past couple of years, but the doctors have been working miracles, and both he and I are looking forward to his being on this trip.

Chris Williams – My son Chris is recently back from Tokyo, where he has lived for six years, going to college there and art school. While going to school he supported himself working as a software engineer. Neither Chris nor my dad have ever really spent time on a boat. Chris has always had a fascination with maps, and I think the chance to play with all the navigation electronics on the boat is the real reason he is going.

Jeremy Henderson – When I first met Jeremy he was an assistant project manager working on the Nordhavn 68 project. He’s a bright, resourceful young man, and my understanding is that he is now a project manager on the Nordhavn 47. Jeremy and I spoke many times daily while our boat was being built, but I really don’t know much about his boating skills. My belief is that this will be his first major run.

Jeff Sanson – Technically, I’ll be the captain of the ship. But, behind the scenes, Jeff will be the guy I’m looking to for guidance. Jeff is a professional captain who runs a yacht management service in the Seattle area. Should things go wrong, on my boat or elsewhere, Jeff will be a handy guy to have around (an understatement!)

This said, my hope is that we will be the most boring boat in the rally, and that the majority of my future blog updates will focus on the other rally boats, and the wonderful country we are visiting.

That’s it for now. It’s time to stop writing, and start packing. My next report will be from San Diego! As always, if you know someone who you think would enjoy receiving the rally updates, have them subscribe by CLICKING HERE.

PS I just noticed that Nordhavn has released the latest edition of Circumnavigator Magazine, with our boat on the cover, and a 16 page article about it inside!!! I haven’t gotten a copy yet, but it should be fun reading. The latest copy can be downloaded from Nordhavn’s site. Although, probably they’ll give you your own real copy free if you order a boat.

Post Views: 460
PrevPrevious PostUpdate # 14 – And I thought parking in Manhattan was hard…
Next PostTomorrow we fly to San DiegoNext