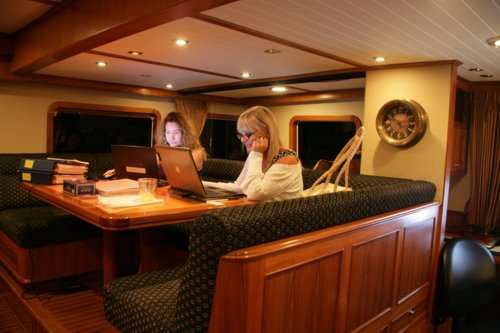 This will be a short update, because there’s not really a lot to say.

We’ve been in the marina at Barra Navidad since Feb 1st. I mentioned in my last update that it was a special place, and my opinion hasn’t changed. The marina is in front of a luxury hotel (The Grand Bay Hotel), and the marina guests are treated as hotel guests. This meant days lounging by the pool, and fancy dinners in the hotel. We also quickly discovered that there is a water taxi, that would pick us up at the boat, and take us the short 5 minute ride into the town of Barra, where there is a beautiful beach, and many beach-front restaurants. Virtually every restaurant accepted our little dog, Shelby, which made her very happy.

Yesterday, we took the tender to explore the lagoon next to the marina. There are approximately 50 boats anchored in the lagoon. Listening to the radio, my impression is that many boats consider Barra their ultimate destination for the summer. We noticed a lot of the boats in the lagoon with long strands of moss beneath them, a hint that they have been anchored a long time in the same spot. My guess is that there are boats that come here year after year to spend the winter. And, why not? The water taxi picks you up at your boat, and drops you in Barra, or you can tender to the many restaurants, where cruisers can spend the afternoon hanging out with friends. I heard pot lucks, volleyball games, evening listening to music, etc all being planned on the radio. Of course the primary reason everyone is here is the weather. The days have been perfect; mid 80s, light breeze, sunny.

You’ll note that I used the word “Cruisers” rather than “Boaters” in the prior paragraph. Several people have sent me emails telling me that the “community” here is comprised of cruisers, NOT boaters. I’m not sure I understand the distinction, but those who have corrected me seem passionate about it – so, I shall be more careful going forward.

One warning about the lagoon: Watch the depth and get good information from someone who has been in before Earlier this week, I was able to spend an entire day at my computer, looking out the window into the lagoon, and watched as three different vessels went aground. Two large power boats, each of which was successfully pulled to deeper water, and then a sail boat that had to spend the night aground waiting for the next tide cycle. [Note: I confess to having been aground once. There’s an old saying ‘There are two kinds of boaters: those who have gone aground, and those who will go aground.”] Roberta and I circled the lagoon in our tender checking the depths, and saw lots of places under five feet, and even some two foot water. Clearly there is an approach to the lagoon we couldn’t find, because lots of boats make it in and out just fine every day, but I’m not sure how they do it. There are lots of opportunities for mistakes.

A large power boat stuck in the mud – the tender in front is trying to drag the nose off the sand bar
A group was organized to pull this boat off the bar for 8 a.m. the next morning. When the time came, the tide was higher and it was off in seconds

New guests have arrived on Sans Souci; Dean and Ingrid, who own a Nordhavn 55, based in Seattle. Although our goal is Costa Rica, 1,400 miles south, we decided to backtrack and head back to Tenacatita, which was an anchorage we enjoyed 20 miles north.

We shall miss Barra. Here’s our last look at Barra as we exited the marina, and a picture of Roberta who was enjoying running the boat:

I used the short run to Tenacatita to do some experimenting. There were two things I wanted to test.

1) I’m still doing planning for our trip next spring across the Pacific. We are probably going to Hawaii (2,100nm), but I’m also researching what it would take to go to the Marquesas (2,600nm). We made the decision on Sans Souci to go with twin engines, which reduces our range. Either of these trips is possible, but I need to do some advance planning to develop a strategy for the passage; particularly if we were to decide to head to the Marquesas. As a simple test, I knew that I needed to run the boat such that I could make at least 1 nautical mile for each gallon consumed. A perfect goal would be to run 8 gallons per hour at 8 knots. However, we were consuming over 11 gph at 8 knots. To finally achieve my target ratio, I had to kill one engine and run single engine. All of these numbers are very preliminary, but my current sense is that if I alternate engines, running single engine, I will have no problem – and that I will be able to make either passage at roughly 7.5 knots. If you have a twin engine boat, I put together this document with tips for twin engine Nordhavn owners planning extremely long passages.

2) I have been told that Sonar is important in the South Pacific. Sonar is like radar, but works under the water. It can look a thousand feet or more in front of the boat to tell you the depth. Whereas radar is fairly straight forward, and I have trained persons to use the basic radar functions on Sans Souci in 15 minutes, I’m struggling with accurately interpreting the Sonar. Dean and I experimented throughout our run yesterday, and never really got it right. I will master the Sonar, but I can tell that it will require frequent experimenting.

Entering the large bay of Tenacatita, we observed whales, dolphins, and a LOT of these:

We saw hundreds of these strange shapes in the water everywhere around us. Having cruised extensively in the Northwest, it felt like I was back to dodging logs.

When passing close to one, I finally realized what they were – Sea Turtles!

At anchor, Dean and I decided to check out the dive gear. On Sans Souci I decided to go with a Hookah system rather than a dive compressor. I don’t have a picture of us diving, so here is a picture from the Brownie’s website showing how the system works:

You do not wear tanks. Instead, there is an air compressor on Sans Souci. You simply spool out a long hose, that provides air for up to four divers. The diver needs nothing more than a weight belt. I’m certified as a diver, but don’t dive often, so I thought this would meet my needs. All I really want the set up for is to be able to untangle a net should I ever catch one in my prop or to look at the anchor should it ever be stuck. Dean and I decided to go check out the anchor, which was 40’ down, and 200’ in front of the boat. The water here in the bay was a major disappointment. Visibility was under 10 feet, and we didn’t see any fish. We also didn’t reach the anchor. About half way to the anchor, we realized we had run out of air hose. I can buy extension hoses for the hookah system, and now know I need one. I was actually happy to turn back. The lack of visibility was bugging me. I really don’t like large fish sneaking up on me when I can’t see.

The afternoon was spent just being lazy and playing in the water. Here’s a picture of Roberta and Ingrid using the lines to the flopper stoppers as a rest stop while swimming around the boat:

Lastly, if you’ve ever been curious what we really do most of the time aboard Sans Souci, here’s a very typical scene. Dean’s laptop is just behind where I’m standing to take this picture of Roberta and Ingrid, and my laptop is just out of the photo to the right. To my great surprise we have discovered a wireless internet signal which works here in Tenacatita. All four of us ran to our computers!

As I type this, we’re waiting for the tide to come up so we can try to take the tender on the “jungle cruise”. It’s a ride several miles back a narrow channel which is accessible by tender – maybe. The tide isn’t very high today, and I may not make it into the channel. If we do, I’ll have some great pictures for tomorrow.

That’s it for now. Thank you everyone! We’ll only be here for another day or two, and then begins the real voyage. We’ll be running 50 miles south to Manzanillo, stay there a day or two, and then do a 24 run another 200 miles south to Ixtapa. Someone sent me a picture of a crocodile in the marina at Ixtapa … If it was a real picture we may not be doing much swimming….

Until the next time,