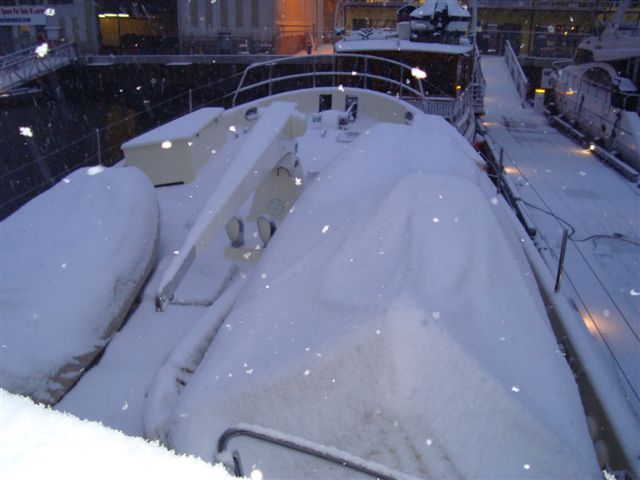 This has been a busy week aboard Sans Souci, although I must confess that I have been far removed from the “action.” During the winter we live in Mexico. The boat is now in Seattle, where Pacific Yacht Management (Jeff Sanson) is looking after it.

Jeff’s project this past week has been to get the boat ready for a visit by Nordhavn. The boat has been outside the US, or on the move, almost nonstop since I took delivery in July 2007. We have known about a few warranty issues on the boat since the beginning, and this is the first chance Nordhavn has had to dig into them. Jeff has been working hard to get everything organized for their visit, and “opened up” so that they’d have easy access to do their evaluation. One of their senior technicians was on the boat all day yesterday looking at the electrical system. I spoke with him at the end of yesterday. He believes our problems with the a/c may have been caused by some faulty wiring, and that swapping the a/c chillers won’t solve the real problem. He seemed to have a game plan for resolving the problem and was very confident. He was driving so I didn’t get many details, but it will be nice to have this particular problem behind us.

And.. on a different topic…

I was reminded yesterday that I never spoke about my tour last month of a NOAA, and a Coast Guard vessel. The tour resulted from a reader of my blog mentioning that he had an invitation to tour a couple of big ships in Seattle, and did I want to tag along? Of course!

The first ship we visited was a NOAA research vessel, the “Okeanos Explorer”. The Okeanos is a very unusual ship for NOAA, in that it is 100% focused on research. I arrived knowing nothing about the boat, and couldn’t follow the conversation about ROVs and telepresence. What’s an ROV? I understood quickly when we walked to the back of the vessel and suddenly I saw something that looked like a lunar landing capsule. ROV means Remotely Operated Vessel. The Okeanos has the ability to send the robot down as much as 6,000 meters (around 20,000 feet!) under the sea, to do research. Okeanos is linked to research facilities where scientists can remotely control, and see in real-time, the bottom of the sea.

Our second ship was the Coast Guard icebreaker “Healy”. Wow! I explored virtually all of this amazing 420’ vessel. Interestingly, both of the vessels were diesel electric. The Healy carries 1.2 million gallons of diesel. Their missions are primarily in the Bering Sea and the North Pole. When the Healy leaves port on a mission, it is usually out for three to six months. Most of this time is spent with no ability to communicate. It was mentioned several times that “North of 70 degrees” [latitude] sat phones stop working. There is no internet, no television, and no phone service. Perhaps that’s where the expression “It’s lonely at the top” comes from.

I couldn’t resist asking our tour guide how he thought our boat would do in the Bering Sea, knowing I wasn’t going to like the response. He said, “Let me put it this way. There are times when easily a third of all crew are in their bunks violently seasick.” I pointed out we would be there in July, and he said “It can get ugly any month of the year in the Bering Sea.” That ended my questions on that topic.

I asked about maintenance on the ship and our tour guide said that fighting corrosion was a full-time non-stop activity. To emphasize the point he reached overhead to a water pipe and banged his fist on it. He said “Sometimes when you do that the pipe collapses. The whole ship is constantly eating itself.”

The ship was amazingly well organized. All wiring was exposed, easily accessible and continuously labeled. Everything was 100% clean and organized. I forgot to lock down a door I came through, and was given a lecture on how an undogged door could cause a broken arm.

As we were approaching the bow of the boat, I noticed the internal “rib cage” of the vessel getting much closer together (the beams supporting the steel hull). It was explained that this was to toughen the bow for ice breaking. The ship rams 6 foot thick ice, to carve passageways. I asked about the sound, and was told that it is quite unnerving, and VERY loud. Imagine backing up several hundred yards, then accelerating straight into an ice wall. Amazing.

After my tour, I decided to google the vessel. A very sad story came up about a diving accident, on the Healy, in the Bering Sea, that claimed the lives of a couple of crewmembers, and ended the Captain’s command. I’ve been interested in getting training for cold water diving, so this caught my attention. Here is the full accident report. Depressing, but compelling reading, and a reminder of how you can never let your guard down at sea.

And, on a different topic…

I raised the topic of security on my blog a few days ago, and received this email:

Another reader sent this video about a VERY versatile flashlight.

And on a different topic…

I’ll be in Seattle next week, and a new Nordhavn 86 is there for commissioning! I’ve never seen one, and have been pulling strings to obtain a tour (which turned out to be easy … the owner reads my blog). I’m really looking forward to seeing it. Jeff first alerted me to its’ arrival in Seattle: “Ken there is the biggest Nordhavn I’ve ever seen that just pulled into the marina. This thing is HUGE.”

And, lastly… I should correct something wrong I said in my last article on hydraulic pumps. Someone asked about how difficult it would be to change a hydraulic pump. David Sidbury, owner of the second N68, sent this email:

PS Steven Argosy, of Seabird, an N62 which is a Great Siberian Sushi Run participant, is parked next to my boat in Seattle. He took these pictures of his boat this morning: