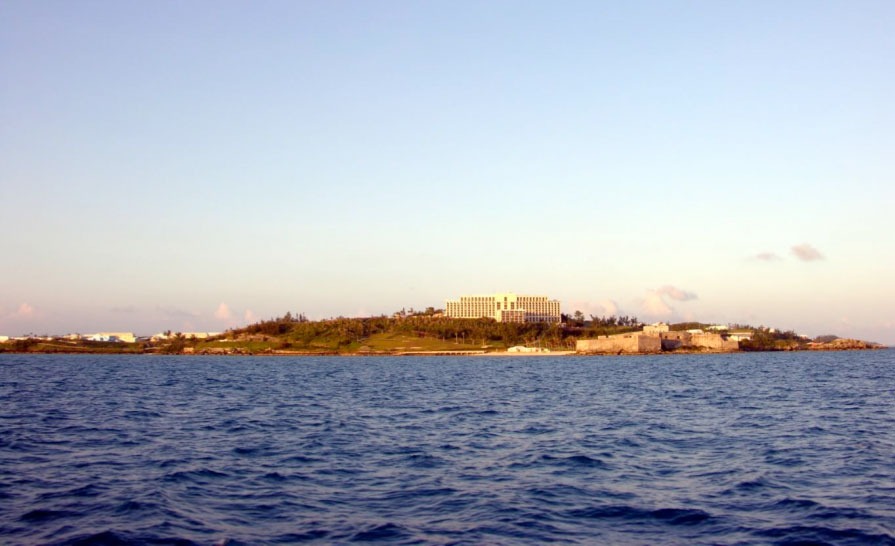 Here is today’s update from Dan Streech. With Dan leaving the rally here in Bermuda, his updates will stop. I’ll miss both him, and his updates. Dan said that he is hoping Kirk White (who is replacing Dan on Sans Souci) will take over for him, and continue the updates. Hopefully, he will!

With the theme song from the Tom Cruise movie “Cocktail” (Bermuda …, Bahama,… come on pretty momma…) playing in the background, I say:

Good morning from Bermuda! We made it!! The fleet arrived yesterday (Saturday) morning exactly on schedule with pride and satisfaction bursting from everyone on board.

Our last night at sea (Friday night) was filled with excitement as the two fleets finally came together. We first saw group 2 on the radar, then one by one, their stern lights began to appear. It was a wonderfully satisfying moment, which validated the endless hours of planning that have gone into this event. For the first time, radio roll call was a combined event in which all 18 boats (including Emeritus) reported their position in order of their size. Throughout the night, the radio was busy with questions and answers about the various issues of arrival.

Around midnight, we began to see the lights of Bermuda. At first, it was just an indistinct sky glow, but then individual lights began to show themselves. Several of us marvelled at the oddness of this little rock of land sitting out in the middle of the Atlantic Ocean.

Entering the channel
Our well-crafted arrival plan turned to benign anarchy when we arrived at the entrance to the “Narrows” passage thru the reef. We were to all enter together to give dramatic effect for the people waiting at the yacht club. However, the faster boats ended up about 45 minutes ahead of the slower boats and just proceeded on to the club. In the end all was fine because the staggered arrival actually helped the docking process run more smoothly. I was very proud of the participants as they deftly manoeuvred their vessels into their “Med-moor” positions. Anchors were dropped and the powerful ABT bow and stern side thrusters were barking out their presence as each boat was manoeuvred into position. Joan and Bruce Kessler were on the docks filming and Milt and Judy Baker with radios in hand were directing the various activities.

The Royal Bermuda Yacht club is PERFECT. It is exactly what one would expect. The building is old and the floors creak, and it reeks with history and British decorum. One expects HRM the Queen Herself to appear at any moment. In fact, she has visited the club twice (in 1953 and in 1994) as evidenced by the photos on the wall. The striking dissimilarity between the pretty smiling young Queen of 1953 and the dour stooped Queen of 1994 is amazing and reminds us that “time waits for no Queen”. The walls are covered with old photos of schooners, steam yachts and various yachting characters going back over 100 years. The lobby and trophy room (where the temporary PAE NAR office has been reestablished), open on to the outdoor bar and eating area. As one comes and goes from the slips, they must pass by the bar area… thus this “watering hole” has quickly become the social center for the participants. In a strange juxtaposition, the bar area is also an internet “hot spot”, so the 100 year old edifice steeped in tradition has been invaded by laptops. While in Bermuda, I will be doing my internet business from the yacht club to give some relief to the expensive system aboard Sans Souci.

I can only describe Bermuda in superlatives. I LOVE this place. The air is balmy, the weather is perfect and the mood is friendly and relaxed. The rocky shoreline of the lovely bay that we are located in reminds me of Maine. The pastel colors of the building and houses remind me of a Mediterranean scene, the beautiful lush greenery and flowers reminds me of Singapore. With the knee high socks and the “British” décor and accents, one at first thinks that this place is stuffy. There is however an almost imperceptible wink that says “hey relax, we don’t really mean it…” A local guy came into the club last night wearing a blue blazer with tie, short pants, knee high socks and shiny black shoes. I said to myself… I LOVE this place.

Within a few hours of arrival, we headed up to Smatt’s to rent scooters. PAE now has 10 scooters under contract for cruising around the island (no car rentals allowed – only locals are allowed to drive). As our valiant young PAE men roared off (on the left side of the road), Jim turned to me and said that open ocean passage making was child’s play compared to the dangers that we are facing here in port…

Ken and Roberta have taken a hotel room for a few days to get some privacy and Christian has taken a hotel room. Christian’s very lovely and charming wife Andrea arrived yesterday afternoon and the 3 of us had dinner last night at a quaint Italian restaurant. We hadn’t had pasta during the entire passage and Christian said that he was craving it. When we arrived, the best outside tables were all taken. Christian began rattling in fluent Italian and a table magically became available. During the passage, Christian has had non-stop questions about the technical aspects of a passage maker. The dinner conversation was about steering and the interplay between the stabilizers, the rudder and the bulbous bow. He would not quit until he understood it. One can imagine that there have been many similar episodes after practice or qualifying in which the sensitive interplay between down force, gear ratios and tire pressures were discussed to the nth degree.

While wandering the docks, I ran into Bob Rothman of Emeritus and asked him about his wayward course. He finally admitted that he is a loner and a “contrary” guy who isn’t comfortable traveling in a group. Thinking to myself, then why did you join a group? I told him that there wouldn’t be much opportunity for him to deviate from the plan for the next leg since it is a straight line from Bermuda to the Azores. With a twinkle in his eye, Bob said: “ahhh, but you are wrong… there is the rhumb line route and the great circle route”. With that, Bob and Janis his lovely wife of a lifetime walked away towards the yacht club.

I could not be happier with the rally situation at this point. Leg 1 went perfectly and frankly turned out even better than I had thought. In all of our planning of the details, we had not anticipated the simple FUN and JOY that would come from this rally. I have not done well in naming the individual boats and their owners and crews, but they all have a story to tell and I am proud of each and every one of them. Without exception, the boats (Nordhavn and non Nordhavn alike) have been well prepared and have been well operated. The competence and confidence of the participants is high and will only grow as the rally proceeds.

This will be my last report, as I must head home soon. Business and personal pressures are calling me and I must heed. Kirk White of PAE will take my position as group 1 leader for the final two legs. I wish the rally group well and know that they will complete this undertaking with great success. This first leg to Bermuda has shown me that the NAR management and the participants themselves are first class and will cope with whatever befalls them.

I will stay here in Bermuda for a few more days, but won’t post any more reports. All they would say anyway is: I LOVE this place and we are having fun.

Post Views: 327
PrevPrevious PostDay 14 – Arrival in Bermuda!
Next PostDay 16 and 17 – In BermudaNext