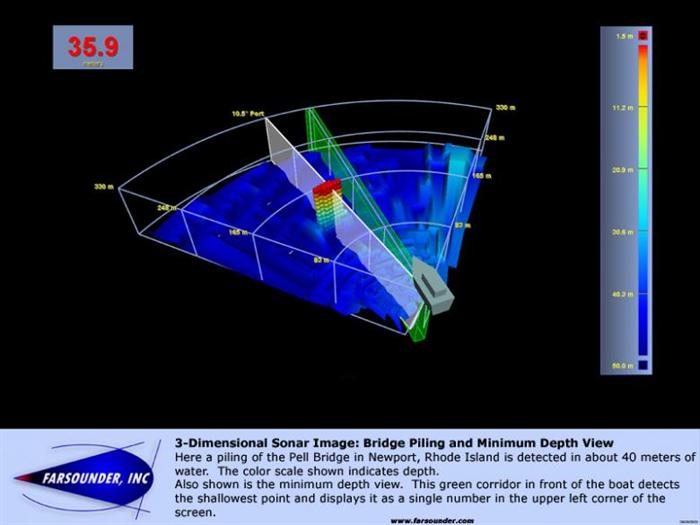 I’ve mentioned several times over the past year that I’ve been frustrated with my Furuno CH-250 Sonar.

It isn’t because I haven’t read the manual. I’ve read the manual cover to cover on several occasions. I’ve even read the “tips book” that Furuno provides. I keep thinking I understand how to use the Sonar, but whenever I’ve tested my knowledge, I’ve failed miserably. The “final straw” came during a recent trip to Costa Rica. I was anchored in a giant bay, several miles across, which had depths mostly from 10 to 30 feet. I wanted to test my ability to explore the bay, and find shallow places, using the Sonar. I dropped the tender, and spent an hour doing my own soundings, and then used the Sonar to try to replicate what I’d discovered with the depth finder on my tender. I was never able to get accurate or reliable information from the Sonar. Had it been a real-world situation where I was hunting my way through a coral reef I’d have been in deep trouble.

Finally, I’ve decided that it might really be a hardware issue.

I sent this email off to Furuno’s Sonar expert:

Somewhat on the same subject…

David Sidbury, owner of the second N68, sent me an email suggesting I look at a Sonar-like device called the FarSounder (www.farsounder.com).

It is similar to Sonar, but 100% focused on collision avoidance.

The screen is updated much more frequently, and seems much easier to read. There are no moving parts, and nothing that has to hang down below the boat. My Furuno Sonar has something like an upside down periscope that adds an extra foot to the depth of my boat whenever I want to use it. I’m not sure adding a foot to the depth of your boat is the best way to test for shallow water. In fact, I spoke recently to a Nordhavn 62 owner who managed to scrape his Sonar off the bottom of the boat, while in shallow water. That would not be an issue with the FarSounder device, and as near as I can tell , there is no reason (other than the power it requires) that it couldn’t be run at all times.

“…FarSounder technology provides a complete 3D picture of what is ahead of the vessel. Unlike other forward-looking sonars, FarSounder provides all three navigationally significant components: range, bearing, and depth. With color mapped to depth, where blue is deep, a simple representation of dangerous obstacles can be depicted. With all three components, the user is able to accurately understand the navigational picture ahead of the vessel. The user is able to determine where or where not the vessel is able to pass. Uncharted obstacles such as submerged shipping containers, whales, and rocks are some of the obstacles of which the user now has a complete picture….”

I spoke with their company for a while this morning. Until recently, the smallest boat they’ve installed on is 120 feet. But, amazingly, they just completed an installation on a Nordhavn 62! They put the transponder into the bulbous bow! They are very interested in targeting Nordhavn owners, and were very enthusiastic about working with me.

Unfortunately, there is a major downside: cost. This is an expensive piece of hardware. His estimate was that it would cost $90,000! If it actually works as advertised, I might give it serious consideration. However, for me, it is out of the question at this time. We’re leaving on our circumnavigation in a couple of months, and already have a LONG list of projects. I don’t want to add another large project to the list, this close to show-time. And.. I do confess to not being in the mood to write a big check.

FarSounder sent me a couple of different examples of the transponder installation (Example 1) (Example 2). They also have a demo on their website that is worth watching.

With a little luck, swapping the transponder on my Sonar will have solved all problems, and this is irrelevant anyhow.

And, on a different topic:

I mentioned in my last blog entry that I’m still trying to decide what to do on the issue of adding storm plates to my boat.

Here are a couple of conflicting emails I received, from the two people I trust most on this topic: Bill H, the commercial fisherman who will be accompanying us on the GSSR, and David Sidbury (one of the smartest guys I know)

The Fubar rally, from San Diego to La Paz Mexico, will start accepting applications March 15th. I did this rally last year, and had an amazing time. I think we had around 75 boats, and would expect they’ll have even more this year. If you are interested in going, get your application in right away.

Here is the press release they sent out today…

FUBAR is sponsored by the San Diego Yacht Club and the Mexican Tourism Board.

Qualifications to be considered are 450NM @8.5 K with all fuel in boats tanks. Boats should be captained by their owners not by professional captains. Boats selected will mostly be less than 60 ft unless entries agree to host an escort boat and carry some FUBAR staff. The staff will include professional captains, a medical doctor, mechanical technicians and other support personnel. You do not have to be a member of a yacht club to participate.

The Rally fee is $750 and can be paid by credit card while completing the online registration form at www.sdyc.org/fubar.

Selections will be made with early applications considered first, and a waitlist established if applicable.

In preparation for the Rally, seminars for participants are planned for September 30-October 1. They will include medical, provisioning, fishing and other planning.

San Diego will be the meeting place for all boaters who should arrive November 9. There will be boat inspections, immigration check-in and seminars. All Captains will meet to discuss the course, and a farewell party will follow.

The Rally will officially depart on Saturday November 14, and the first stop will be Ensenada, MX. The next stops will be Turtle Bay, Santa Maria and Bahia de Magdalina, San Jose del Cabo at the Puerto Los Cabos Marina and Resort, Bahia de los Muertos at the Bahia de los Suenos Resort and the final destination will be La Paz and the CostaBaja Resort and Marina. The Fleet of approximately 50 boats will embark on a 13-day adventure filled with parties and entertainment along the way.

FUBAR is a charity event with excess proceeds going to the benefit of Junior Sailing in Southern California.