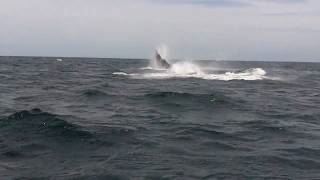 My brother and his family visited us in Cabo this week. A few days ago they took a panga out scuba diving and had a very close encounter with some whales. Most interesting to me is that the panga had my two sons, my brother John, his wife, their two young daughters, plus the two guys running the panga. I can’t imagine getting that close to the whales with an overloaded panga of people!

Here’s a video they shot, which is poor quality, but I think you’ll get the idea:

If you don’t see the video above, click this link: http://www.youtube.com/watch?v=Zxl57SUvI_c

While on the topic of Cabo…

I was at the Puerto Los Cabos marina in San Jose Del Cabo yesterday, and snapped this picture of the new dry stack boat storage facility that is going in. I’ve been told that a 150 ton lift is going in, but the lift didn’t look that large. I’ll back sometime in the next couple of weeks and try to get a better look. It was great seeing the rapid progress they are making, and seeing the marina full of boats. There were a couple of huge megayachts and probably a dozen boats over 100′.

Image cabodrystorage.jpg
As to the GSSR and our upcoming trip…

The adventure begins around April 15th! That date is coming very quickly now, and there is starting to be a flurry of activity.

As I mentioned in my prior blog entry, we shipped an entire container full of parts to Japan. However, the container literally “missed the boat.” I still don’t know what went wrong. Everyone is pointing the finger at each other. The story I’ve heard is that the container holding our spare parts was somehow mislabeled, or not labeled, regarding the hazardous materials inside the container (liquids like oil and fuel additives). Thus, the freighter couldn’t carry the container and it was left sitting on the dock. A new freighter has been assigned to transport the container, and it will hopefully still arrive in Japan in plenty of time for our departure. We’ll see. I’ll be sweating this one until the container clears customs in Japan.

There is some good news…

I was worrying about Seabird’s transmission. The transmission was removed from the boat, for overhaul, but has now been repaired. It still needs to be put back in the boat, and some parts are inside the “delayed container” but all is looking good.

Steven provides some good information about all of this in his latest blog entry. Click here  to  read it.

My biggest project over the past month has been… our dog, Shelby.

We’ve finally got it all figured out. Shelby will be with us until the furthest point south in Japan (an island called Ishigaki) where we’ll be met by a friend of ours, Phil, who some of you may remember as having accompanied us across the Atlantic a few years back. Phil will fly with Shelby back to Osaka where we’ve rented the two of them an apartment while Roberta and I continue with the boat to Taiwan and Hong Kong. It’s not a perfect solution, but it works.

As to when the fun begins…

Roberta and I plan to return to the boat around the first week of April. I want at least  a couple of weeks on the boat prior to our departure to sort out lots of “electronics” tasks. I’ve bought new computers for the nav system, and need to swap out the old ones. I’m a computer geek, but still a bit worried about the project, because of the interfacing of the software to the autopilot, the radar and the AIS. That said, if it looks hard once I’m on the boat, I’ll simply not do the project. The current ship’s computers are fine.

That said, the one thing that argues that I need to make a change is that last year I struggled with Nobeltec’s chart coverage in Asia. It just wasn’t very good. As part of the upgrade I’ll be swapping the boat over to a new charting package, Maxsea Timezero. It’s new, and I don’t know how stable it is, but it is fast and very fun to operate. The charts of Japan seem much better than what I had on Nobeltec, although… I have a pre-release of the charts, and the copy I have seems flawed. I’m hoping to get a chart upgrade from Furuno before the trip begins. My hope is to have Maxsea, Nobeltec AND Coastal Explorer all installed and operating, so that I can swap between them according to has the best charts for any particular region.

Our GSSR group will be joined this year by Don and Sharry Stabbert, who have the 75′ Northern Marine vessel Starr. They departed Hawaii a couple of weeks ago headed towards Japan. It sounds like they are having fun working their way towards us, and if you haven’t yet registered for their blog, I recommend it: http://starr.talkspotblogs.com

Here’s an excerpt from a recent email Don sent me:

Post Views: 233
PrevPrevious PostGetting ready for the typhoons
Next PostThe "Why" boatNext