Sans Souci in an ad? And, dogs in Europe? 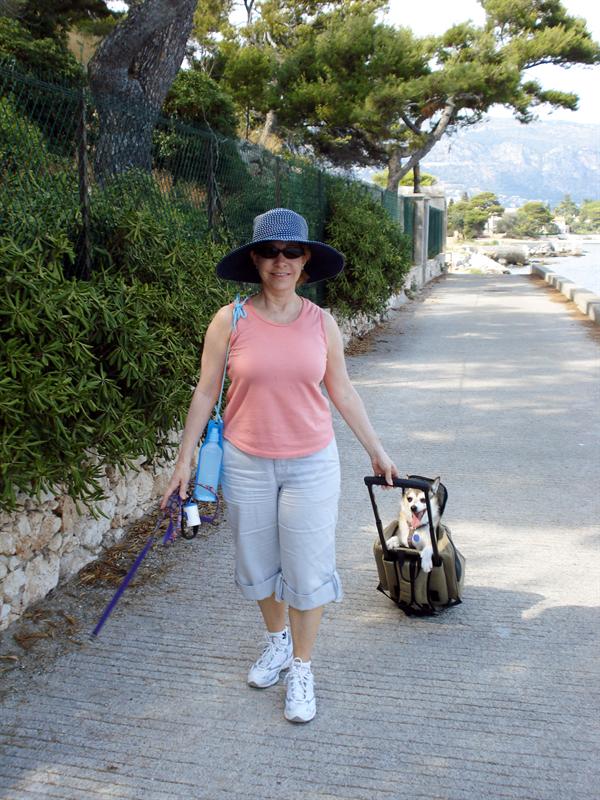 Nordhavn has a series of advertisements that feature Nordhavn owners, and their cruising adventures.

Yesterday, Nordhavn’s marketing department called to ask for permission to feature our boat in an ad. I figured that they wanted to talk about someplace exotic we had cruised, but it was nothing like that.

To my surprise, they are focusing on something I said in an article in the current issue of Southern Boating magazine. At the end of the interview the reporter asked what engines we have in the boat. I said “twin Luggers, each with 340HP”. The reporter seemed surprised by this, and asked why I didn’t get larger engines. I said that if anything, I should have gotten smaller engines; that our boat reaches its’ maximum speed at only 220HP (110 per engine), and that if anything, my boat is OVERpowered.” It still amazes me that you can move a 100 ton boat, at hull speed, with only 220 HP.

It was just a “throwaway comment” and I thought it off topic, but Nordhavn’s marketing group liked the idea of taunting the fuel efficiency of Nordhavns. I thought of it as a strange way to sell boats, but they may on the right track. In addition to our Nordhavn I own a Ocean 48 sportfisher that we use in Mexico. It gulps 40+ gallons per hour, and has gotten so expensive to operate that I hardly use it. I asked Nordhavn for permission to post the ad on my website, and they said yes, but not now, because they are still tweaking the ad.

Southern Boating misinterpreted my comment and wrote that I wished I had built the boat with smaller engines. That is incorrect. I’m very happy with my engines, and wanted the comfort of knowing that either engine was easily capable of running the boat, should the other fail.

On a different topic… I’ve been swapping emails with Milt Baker, a Nordhavn 47 owner now cruising in Croatia, about our dogs. Roberta and I travel everywhere with our dog Shelby, and Milt and Judy travel with their schipperke Katy. Milt mentioned he had gotten an EU pet passport for Katy, and I wanted to know the process so we could get one for Shelby. When I asked Milt whether an EU Pet Passport might be helpful in getting Shelby into England or Australia, this is what he responded: “….I believe requirements for both countries have eased for dogs in recent years, but we got her the passport from a vet in Spain (no doubt you could do the same with a vet near St. Tropez) because we wanted to be able to ease her into and out of EU countries and never looked into going farther afield with her. Truth is, we’ve gone from Spain to France to Italy to Montenegro to Croatia since April and nobdy has even asked for Katy’s passport. They don’t really care…..”

Prior to Roberta and I coming here to France we went through a long painful process to get all her paperwork “just right.” To no great surprise, they never looked at her paperwork at the airport. However, I’m SURE that had I not had all the paperwork they would have asked for it – so, there is no easy solution.

As dog owners, the lenient attitude to dogs here is wonderful. I gave a long list of dinner reservations to a concierge recently, that included some very high-end restaurants, and asked that he phone each one to ask if Shelby could come to dinner. His response: There is no problem taking your dog to any of the restaurants on your list.

Here’s a photo of Roberta hiking with Shelby yesterday along the coast at St Jean Cap Ferrat. We have walked hundreds of miles of the coastline of southern france, and bring a stroller for Shelby when it gets too hot for her.