Retiring on a boat? 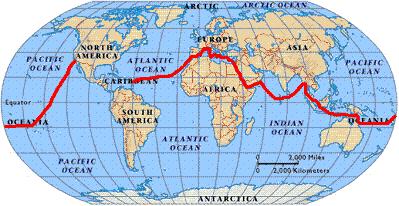 Roberta and I had old friends drop by on New Year’s Eve, who wanted to see Sans Souci. Their only boating experience has been owning a little ski boat that they use to run around a lake. But, they’ve been following my blog, and are now thinking that retiring, selling everything and living on a boat, could be a lot of fun.

It was a funny meeting, in that I’m usually full of opinions, and could tell that my friend wanted help in convincing his wife, but I was somewhat reluctant to dig in on the topic. It’s a very romantic, and appealing, notion to sell everything, buy a trawler, and start dividing your time amongst the world’s best cruising grounds.

I do think that moving aboard a boat can be a perfect way to retire for many people, but I also suspect there are others for whom it would be a total disaster. How many times have you heard someone say that “The best thing about boating is the people you meet”? There is more to this simple sentence than you might think. Cruisers tend to enjoy each other’s company, because they have much in common, and those that don’t share the “common attributes” tend to shake our early in the process. Personality traits I would point at include: self sufficiency, independence, an ability to adapt to ANYTHING, an interest in travel and exploration, the ability to fix things when needed, the desire to fix things BEFORE needed, the ability to self-entertain, and a healthy sense of humor. If you can’t “roll with the punches” and see the humor in the constant annoyances that are inherent in boating, you may be happier living ashore.

Unfortunately, we only had a couple of hours together, which really wasn’t enough time to offer any meaningful advice. And, I’m actually not certain advice was wanted. As I said, I think what my friend really wanted was assistance in selling his wife. Any serious analysis of the pros and cons would have been outside my “job”. Perhaps my friend was right. I think he just wanted to get her sold on the concept, and then once she was “bought in” it would be time to start analyzing whether or not living aboard was really the right option. And, it is probably better to not dig in, too deep, until after you’ve convinced yourself that it is something you would like to do.

Actually, I think my friends are the right type of people to consider retiring on a trawler. Their budget is tight, and if you are smart about it, you can live very inexpensively. Their kids are grown and out of the house. They are rattling around in a big house that feels empty, enjoy meeting new people and love to travel. They’re assertive, “make it happen” people, and not afraid of a challenge. It’s the right time, and they are the right kind of people.

So… let’s say that he sells her, and they were to do a detailed analysis, what sorts of things would go on the list…

I just tried typing a list of pros and cons, and couldn’t come up with one. It wasn’t as easy as I had thought. The pro is that you have a “portable home” which you can move from place to place, according to your mood. If you understand this concept, and look at it like this, there really aren’t any negatives. There are things you do differently, and options you have that you didn’t have before, but overall, I can’t think of any negatives. You may say “But, what about moorage fees?” or “What about maintenance?” or “What about bad weather?” or “What about pirates?”. I have trouble putting all of that on a “cons” list, because all of it is under your control. There are cruisers who have become very good at finding places to anchor, year round, that don’t cost a dime. So, how can moorage fees be an issue? As to maintenance, once again, whether or not it is better or worse than a house is up to you. If you load your boat up with lots of gadgets, and move it to Indonesia, and then find you have to fix things yourself, and this annoys you – then don’t load it up with gadgets, or don’t move it to Indonesia, or pay someone else to fix it, if you have the money. My point is that you control the level of maintenance you sign up for. There are plenty of cruisers out there, with boats that are simpler, and require less maintenance, than the homes they sold to buy the boat. Thus, how can I put maintenance on a list of cons? As to bad weather, once again, if you take the position that you are going to keep the boat in good weather places, and not go out when the weather is bad, then couldn’t this really be described as a pro, not a con? Cruisers control the weather, the weather doesn’t control them. If they decide to go to the Bering Sea, and get beat up (as I’m doing), it’s because I decided to do so. That’s hardly a “con”. Once again, a discussion of pirates is silly, because they are fairly easy to avoid. If you keep your boat in a secure marina, or in a secure anchorage, you are unlikely to see pirates. It’s the same as getting mugged in any big city. Even here in Seattle, I know that if I walk certain parts of downtown, at 1am, I am going to get mugged. That doesn’t mean it isn’t one of the world’s great cities, or that walking is bad.

In other words, I would argue that a discussion of pros and cons is less relevant than taking a realistic look at what your personal cruising lifestyle would be. The cruising lifestyle comes in different flavors. There are people who live on megayachts and have a crew to deliver them places, and then helicopter home for their hair appointments. There are also cruisers with 20’ sailboats, a bucket for a toilet and only sun-heated hot water for showers. Both of these, and everything in between, is a perfectly valid way to live on a boat. There are also cruisers that never move, with their boat sitting in the same marina year after year, and cruisers who circumnavigate. I would also argue that these, and everything in between are perfectly acceptable lifestyles. My only point in this is that when someone says “Does it make sense to sell the house and buy a boat?”, the answer, in my mind, is really “Sure – but, now tell me what boat, and what you plan on doing with it, and I can perhaps give you some clues as to the kinds of things you should be thinking about.”

Success in retiring on a boat really comes down to thinking through what boat to buy, and what a typical year looks like. It would be an expensive, and horrible mistake, to retire on a boat, only to decide 30 days in, that you don’t like it. As many of you know, Roberta and I have spent the last couple weeks moving from a house to a condo. What you may not know is that this is our second condo. A decade ago, we decided that if we were going to be cruising, then we needed to sell the house and buy a condo. We went through the whole drill, and bought the condo, and lived in it almost a week before Roberta said “I hate this. I miss having a house.” It was a really expensive mistake, which involved selling the condo, and buying a house, and a lot of money going down the drain along the way. We correctly understood the benefits of owning a house, but hadn’t really thought through what it meant to live in a condo. You suddenly have owners association issues, noise issues, dog-walking issues, and a host of things to deal with that we didn’t really “get.” We were right in knowing that we shouldn’t own a home, but didn’t understand condo living well enough to know what to look for. Perhaps we still don’t. This is our second experiment, and I hope it works, because mistakes are really expensive. Some cruisers make the same mistake. They sell everything to buy a boat, without really understanding what they are getting into. That’s one reason why you find so many boats with more years on them than miles. It doesn’t mean their owners weren’t right to retire and live on a boat, it just means they picked the wrong boat or wrong place to cruise, or really didn’t think through the issues. As I started this blog entry by saying, there are certainly people who aren’t right for cruising, but there are also people who should be cruising, who aren’t, because they tried and failed, or who don’t really understand how great it can be.

So .. what did I tell my friend? We talked about old times, kids, and not much else, while Roberta spoke passionately to his wife about why boating is awesome. I couldn’t decide what to say.

After all this discussion we did go see Sans Souci!

I was somewhat shocked by how it looked. Jeff (who is managing the repairs) had warned me to expect Sans Souci to look like a construction site, but the abstract thought, and the harsh reality, were quite different. To protect the interior, Jeff had covered everything inside the boat, including taping cardboard on the floors, and even putting down nice runners along all the corridors. It was as it should be, and as I wanted it to be, but still a bit disconcerting to see, and made the boat tour somewhat less effective. I was reduced to saying: “That plastic lump on the starboard side is the dining table, and the plastic lump on the port side is the couch.” Even outside, Jeff has everything covered. “The blue lump on the upper aft deck is where we eat, and the blue lump here on the fly bridge is the hot tub.” Our guests were very polite, but probably had a hard time visualizing what Sans Souci normally looks like. To really “get” Sans Souci, you need to be at anchor, sitting on the back deck, sipping something cool, feet propped up, steaks ready to go on the barbecue, and a pretty sand beach not too far away.

And, on a completely different topic….

Kosmos, the N43 now circumnavigating, posted a nice report for New Years. It can be viewed at:

Looking at the trip they’ve already completed, it gives the sense that they are “almost home.” They still have the Caribbean, Panama Canal, Central America and Mexico, in FRONT of them! Wow. They have done a LOT of miles, and made it seem easy. Reading their blog is very humbling. I still remember Roberta and I having dinner with them just prior to the Nordhavn Atlantic Rally, in 2004. They had never really done much boating, but were talking about buying a Nordhavn and taking it around the world. He was a software engineer, and was going to take a two year sabbatical to do the trip. It just didn’t seem possible or probable. But, boy did I under-estimate them! An incredible accomplishment.

Post Views: 281
PrevPrevious PostOur old N62, and some thoughts on charts for the GSSR
Next PostSome great weather photosNext