Propping my boat up 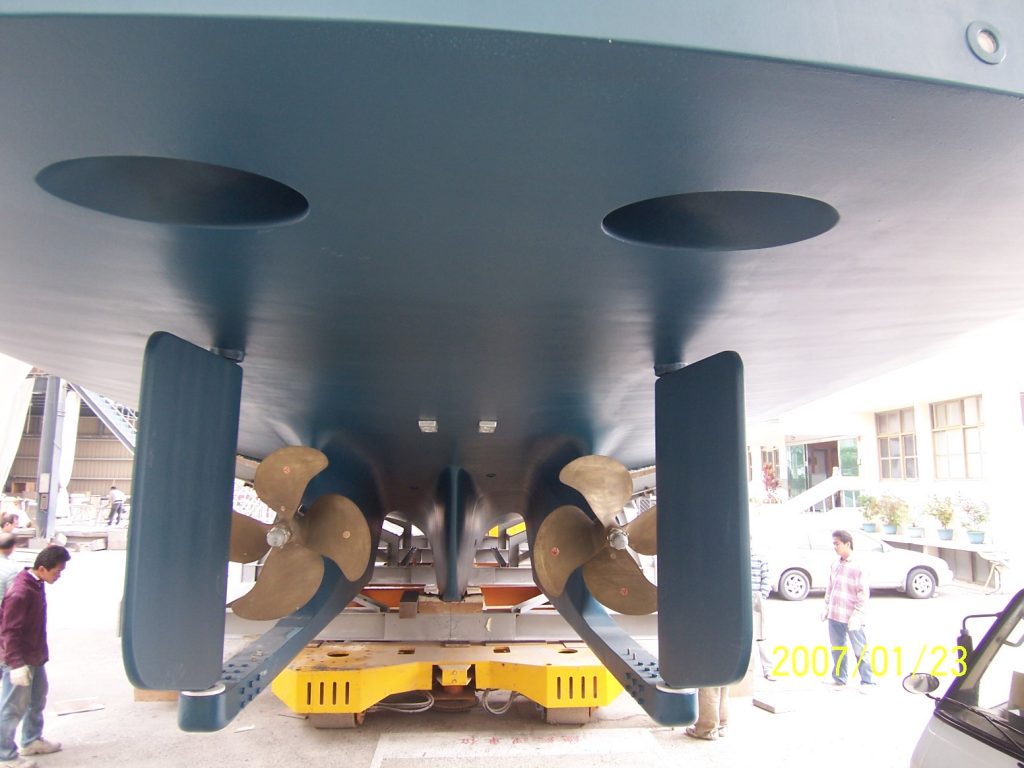 David Sidbury, owner of the second N68, has been updating me on some research he has been doing.

Both David and I are interested in extending the range of the N68. I haven’t really put any serious effort into it, because the little testing I’ve done implies that I can safely run 2,000 miles at over 9 knots. This is enough to make virtually any passage in the world, except going non-stop to Hawaii. I can still run to Hawaii, but I’d have to slow down to somewhere around 7.25 knots. I had hoped for greater range with the boat, but knew, when I opted for twin engines, that this would cut range by 10 to 25%. No one yet, with an N68, has opted for a single engine boat, so it is impossible to know what penalty I am really paying. I have tried running my boat on a single engine, and did receive a “pickup” in range of over 10%. I’m crossing the Pacific next summer, but cheating, and running a route that requires no major passages, so it is irrelevant for me. Were it really an issue, I’d just load on some extra fuel in a bladder, and run with both engines, at 8 knots. I’d be fine.

David, on the other hand, has continued to explore other options. He has mentioned to me several times that he has thought there might be a way to repitch the props and get better range. He gave me several links to sites that have algorithms for computing the perfect prop pitch and size. I went to the sites, and always entered in numbers, but never really “got it.” I’m good at math, and very analytical, but not good enough or analytical enough. David must have also come to the conclusion that this is a job best designated to experts. David got some experts involved who crunched a bunch of numbers, and gave David a design for a new prop that could give as much as an 18% increase in range. That’s a lot of money saved, and a lot more distance between filling stations.

The downside is that it requires buying a new set of props, which are not cheap. And, David’s boat is presently in the water, so he can’t do the measuring required to know that the new props would fit. Until the next time he, or I, do a haul-out, we can’t really measure. I think David said we would need to switch to props that are about 4” greater in diameter (from 38.5” to 42.5”). Both of us think we have room, and the plans indicate we do .. but, until the boat’s out of the water, we can’t say with enough certitude to write the big check for larger props. And, then, of course, the new props may accomplish nothing. In my usual style I said “As soon as David makes the change, and reports success, I’ll jump on the bandwagon.” Unfortunately, Jeff Leishman, the designer of the N68 sent me an email saying that David’s and my boat’s are similar, but not identical (different main engines for one thing), so what works for David may or may not work for me. Darn. If David rolls the dice and wins, I may get my own chance to try.

And on a different topic…

I don’t know how many of the readers of my blog also follow the Passagemaking Under Power mailing list. It’s a great list, because it is all people like myself who have trawlers and want to do long distance cruising. However, for months, the list was inactive. No one could think of anything clever to say, until a couple months back when someone (I think it was Scott Bulger, a Nordhavn owner) suggested we pool our collective thinking and come up with ideas for what the Perfect Passagemaker might look like. Asking a bunch of captains what makes the perfect boat is bound to stir up some conversation, and it did. In July and August the list was averaging about 10 messages posted a month. For December, the list already has 65 messages posted in the first nine days.

From the beginning of the discussion I have found myself outside the mainstream of thinking, and can’t seem to rally anyone else to my position. Here’s an excerpt from an email I posted a few days ago:

do is to outline the options so that when each of us refit our boats, or

pick a new boat, we understand the full range of possibilities, so that we

get as close as possible to our Perfect Passagemaker on the first try. All

of us have bought a boat, and then wished we had done something differently.

That’s a lot of money wasted. If we educate ourselves on what the pros and

cons of each option are, and leave breadcrumbs for others, we’ll have done

My suggestion would be that we pick one system at a time, according to our

mood, and discuss it until we lose interest. I think I gave a list a few

months back of what the “systems” on a boat might be:

– Monitoring systems (what needs monitored, what is possible, etc)

I’m sure I forgot several systems in the list above, but you should see

where I’m going with this.

In short .. There are as many different “Perfect Passagemakers” as there are

buyers. The best we can do is to help buyers know what to ask for – so,

let’s focus there. Rather than saying “What do I think makes a perfect

boat?” we should say instead: “According to different cruising plans, and

budgets, what are the possibilities, and how does a buyer pick between them,

so they arrive at their Perfect Passagemaker?”….”

I absolutely think there is a market for such a boat, but I doubt it would be the right boat for everyone. Several people dumped on high-end boats, with many seeking euphemisms for “Nordhavn”. None have been willing to admit there is more than ONE Perfect Passagemaker. For instance, let’s take my boat, and the most obviously ridiculous thing; the hot tub. I’d be the first to say that it is silly for a boat to have a hot tub, but if it makes the boat more fun for me, why is it a bad thing? It certainly isn’t for everyone, but that’s my whole point. Would the perfect car be the one that has the fewest bells and whistles but reliably moves you from point A to B? Should a car automatically be considered imperfect for having a convertible top? Would the Perfect House be one that gives you a place to sleep, cook and go to the bathroom, but no extra space, no tv-room, and sure as heck no swimming pool? I think there is a perfect $10,000 boat, a perfect $1 million boat, a perfect $10 million boat, and yes – even a perfect $100 million boat, and everything in between – and, that there is a perfect owner for each of these boats.