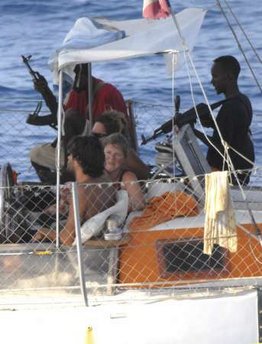 This picture got to me:

As did this headline:

I don't know how long it will stay up, but the blog of Tanit, the french sailboat captured by pirates is still active, at: http://tanit.over-blog.fr/. It can also be "sort of" seen in english, by automated translation.

"We left Aden March 14th, at 3pm, under a blue sky. […] We have started to run without lights. We are headed to Al Mukalla and we are fully in the pirate zone. However, nothing to report."

As I type this, an American captain, Richard Phillips, is being held hostage, and the headlines are talking about a tug being captured, with 16 crew aboard.

A very sad situation. Perhaps all of the recent headlines will focus the world on this issue, and someone will find a solution, although I haven't the vaguest idea what it would be. Better policing of the waters around Somalia? Until there is a stable goverment in Somalia, and a reduction in poverty, it will not be safe for boats to pass nearby.