Our old N62, and some thoughts on charts for the GSSR 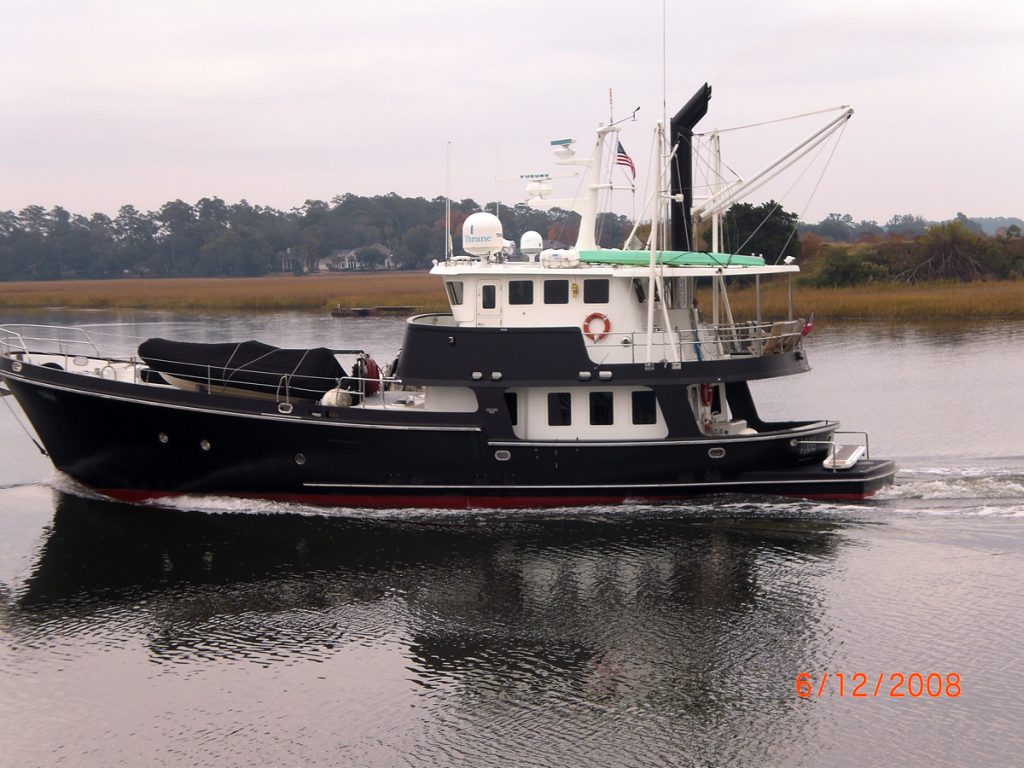 Greetings all. Sorry to have been out of touch for so long.

Roberta and I have been hard at work moving. We had convinced ourselves that we really didn’t have much “stuff” in Seattle, and that our move, from a house to a condo, was going to be easy. We were wrong! It feels like we’ve done nothing except pack and unpack boxes for a week (which is indeed about all we’ve done).

Soon, life will be back to normal. In the meantime…

Thank you to George L, who has a Nordhavn 68 on order. In an impossible, but true, coincidence, George was visiting David Sidbury, aboard the second N68, when my old Nordhavn 62 went steaming by. This is the Nordhavn 62 that Roberta and I took across the Atlantic as part of the Nordhavn Atlantic Rally. It is currently owned by a rock star and her artist husband, who painted it black. I’ve never seen a good picture of it since the paint job, and was curious to see how it looks.

Form your own opinion.

And… on a different topic…

I’m deep into trip planning for the GSSR. In my limited free time, I’m trying to layout our route, and put all the waypoints into Nobeltec. As part of the effort I decided I should go ahead and buy the paper charts for our entire run. Out of curiosity, I went to the website of a company that prints charts (http://www.tidesend.com/) and looked to see what it would cost for the complete package of charts along our route. Can you guess the total??? You won’t believe this number: $3,900.00!

After putting everything into the cart, and then closing the browser without clicking the “Order Now” button, I called Steven Argosy, owner of Seabird, an N62 traveling with us, to ask what he was going to do. Steven said he already had $1,000+ invested in Alaska charts, and didn’t know what his strategy would be for the Bering Sea, Siberia and Japan. I decided I’d contact the company to see if a serious discount is available if I buy three sets of charts. I hope so!

In actual practice, I very rarely use paper charts, and there is some debate in the boating community over whether or not having paper charts aboard ship is really mandated by law. There are credible cruisers who argue that electronic charts meet the USCG requirement. That said, I’ve also heard that Canada requires paper charts, and that they must be originals. The requirement is irrelevent on my boat, in that I am of the opinion that paper charts are required for safety reasons, and I will dutifully buy them, fold them up, and someday toss (or sell) them.

As I told Steven, I will have at least two independent sets of electronic charts on board, with multiple copies on different computers. I will have Nobeltec, that uses C-Map charts. I will also have Furuno’s Navnet 3-d, which uses charts from Mapmedia. In addition, I have the coast pilots, which have some charts. I also have detailed print outs from charts provided by Alaska which have all of the anchorages marked off. Overall, barring a horrendous lightning strike, I can’t imagine why I would ever look at a paper chart.

PS I hope everyone got what they wanted for Christmas, and that all of your New Year’s wishes shall be fulfilled!
Post Views: 263
PrevPrevious PostMerry Christmas!
Next PostRetiring on a boat?Next