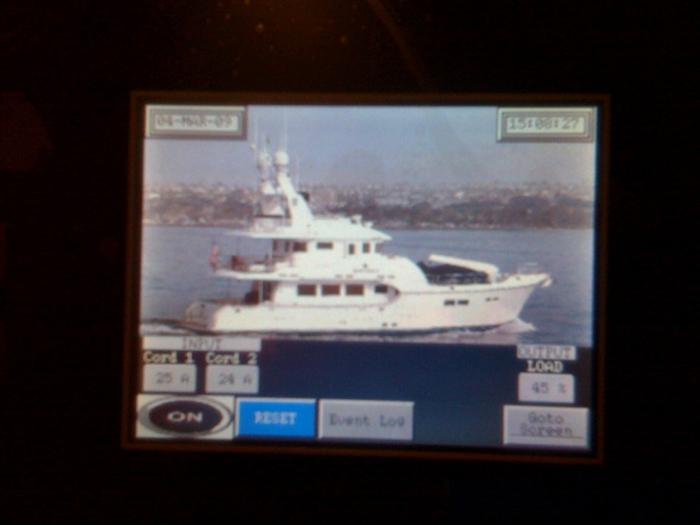 We are getting very close to the start of our big trip!

Roberta and I are on the final couple of weeks at our home in Mexico. At the end of this month we return to Seattle, where almost immediately we’ll run Sans Souci one hundred miles north for a serious shakedown. If we find any glitches this will give the mechanics a couple weeks to fix things before we start our run to Japan on April 23rd.

All of the work on the boat is suddenly moving faster than I could have imagined. Here’s the latest update from Jeff, the project manager:

• LED lights : All led lights have been ordered, they are out of stock on some and they are shipping us everything they have. I should have the remainder in 3 weeks. This is OK , I can install all the dimmers and get things ready to just plug in. These are going to be really nice.

• A/C : The A/C Units are up and running and I was running the Kabola heater today off the system. It worked well. Brett is coming tomorrow to finish up last details and really run the system check for leaks. I am going to run the system and test through the month.

• Network and Internet: Ed is now really making the network work and make it work properly. The M-7 should be up and running tomorrow. The video card is in and all monitors are working and things are really taking shape. All Simon parts are ordered and things are getting wrapped up.

• Generator: The new Generator is up and running and carrying a load. We ran both A/C units on it and on the A/C panel we are drawing around 36 to 38 amps (including the air handlers). […] The generator did not even seem to struggle. I cannot believe how quiet it is. There still is no sound shield and you don’t really notice it running.

• Atlas Remote: The new atlas remote is pretty cool with a picture of the boat on it.

I think I’ve discussed all these projects before, so there isn’t much to add. The Atlas control panel is the panel for controlling my international shore power converter. We’re installing it on the main electric panel. Currently, for me to check on the shore power I’ve had to lie on the floor of the lazarette, which gets old after a while.

To me, the most noteworthy thing is that I was just in Seattle a couple of weeks ago, and the boat was sitting out of the water, with everything so taken apart it was hard to imagine that things would ever come together. Jeff was very confident that all would come together, and as predicted, we have the finish line in site (or, is it just the beginning?)

There is one project which has been a bit controversial.

The owner of the second Nordhavn 68 installed a “Bypass Oil Filtration System” from Puradyne. This system supplements the existing oil filtration system, extending the life of engine oil.

Typically, this is done on main engines, but in my case, I’ve considered it for my 20kw generator.

The primary benefit for me is that it allows me to extend the life of my engine oil. The puradyne site claims that I might be able to save on “new” oil by as much as 90%. I did some back of the envelope math, and my estimate is 17 oil changes, just for the generators, between Seattle and Japan. Oil is bulky and hard to dispose of. Anything that reduces the amount of oil I need to lug around is a good thing.

Here’s some pictures from the second N68’s installation of the system:

Bottom of filter – electrical and piping

Unfortunately, whereas Detroit Diesel blessed the installation of this system on my friend’s boat, Lugger expressed concerns about installation on my boat. Here’s their response to Jeff’s query:

Our supply of engines for the Nordhavn vessels, are based upon the John Deere Industrial engines, and because they are basically tractor engines and used differently from a road tractor, constant rpm use is part of the design requirement, for plowing, digging, harvesting, driving lots of hydraulic pumps and pto drives, whereas the MTU Series 60 engine was designed as a variable speed engine. Running a Deere based engine at a constant rpm is right up it’s design spec, although at rpms that operate fuel systems, oil systems at designed pressures, piston speeds that evenly heat, cooling functions that evenly cool the iron mass, and etc. We like the constant 1200 to 1800 rpm operations, because all of the vital functions are operated at their designed levels, allowing the engines to last for very long periods, when maintained according to our recommendations.

That does not mean, extended oil change intervals, or coolant change extended intervals, or extending the life of filters. I would suggest, and this was recommended by Bob Senter, our trainer for some of the Lugger engine owners, that they visit a web-site: http://www.noria.com/learning_center/category_article.asp? articleid=311&relatedbookgroup=Lubrication

Remember, not all manufactures use the same additive combinations in their recommended oils, and today’s oils generally contain more dispersants than ever before, to carry the high levels of soot created under emission requirements. Filter changes become more important than ever before, even though visual observations may indicate less need. Where does it all accumulate if not in the filter, in the low pressure areas within the engine, and despite the convenience of having less waste oil to dispose of, chances are that rebuilds occur more frequently, and remember, that’s long after the warranty has expired, or blame can be attributed, or the original owner has gone land cruising.

Lugger may not be completely understanding the Puradyne system and how it works, but I am not so passionate about installing the filter bypass system that I want to push the point. I constantly have to remind myself that anything I install on the boat must be maintained, and I’d like to reduce, NOT increase, the amount of maintenance I need to do.

And, somewhat related to the topic of keeping things simple, I received an email, in response to my last blog posting about power management, which I thought everyone might enjoy. It’s from Bill H, a commercial fisherman in the Bering Sea, who will be aboard Sans Souci during our upcoming voyage.

Hi Ken. I was reading your electrical entry in your blog. I don’t have near as much issue with electrical things as you do.

I have a Mer Equipment Co (Seattle) 20kw generator. The engine is an Isuzu C240 it burns 1-2 gallons an hour. This generator runs non-stop often for

2-3 months at a time. When I leave town for out west it runs constantly. I just rebuilt the generator engine last year for the second time. First rebuild was at 34,000 hours and the second at 36,000 hours. I never concern myself with generator load. Sometimes it’s just keeping my coffeepot warm. I have electric 2 burner range, electric heaters, three 1000 watt sodium lights for seeing at night when I want to, half a dozen double 3 foot fluorescents on deck, a couple 500 watt decklights and various small draw items. There are also some 240 volt 3 phase pumps which I use when needed.

It will also valve to the bilge if needed. I have heard lots of opinions about “load” but with up to 36,000 hours between rebuilds I’m sticking with what works for me. There’s always 3 ways to do things; the right way, the wrong way and my way, so I don’t recommend any of my procedures to anyone.

Lately I have been averaging 6.3 gallons an hour with main and generator running. This is directly proportional to how far you push the throttles towards the windshield. At WOT (wide open throttle), which is about 1775 rpms on my D343 Caterpillar it burns 11.5 gph.

The throttle setting is also directly proportional to how much fish I have in the hold. Sometimes you don’t care about expenses when you have a nice load to offset it. More often than not I err on the side of economy regardless. As far as speed goes, the difference between throttle settings is in 10ths of a knot so where’s the fire? Wide Open Throttle is still available if you need it.

So there’s another 2 cents worth. You must be up to almost a half a buck by now. Best regards. Bill

Reading Bill’s email has me thinking about whether or not my boat is more complex than it needs to be.

Before I comment though, I’ll share a second email from Bill. I asked him whether or not he has a second generator as backup.

Hi Ken. As for redundancy; I do have a 7KW hydraulic genset that runs off one of the hydraulic pumps on the main engine. I never use it unless my main generator quits, which is a rare occurrence, but has happened exactly twice since 1985; once on the way back to Adak from Attu. I also have a very small inverter that can run some of my stuff for a short time only. Many boats my size have 2 gensets and any boats larger certainly will have. There are also some boats I know, which operate all the way to Attu, who run on 12/24/32 volts DC only. You must also realize that our mission is pretty industrial and creature comforts are secondary at best. […] I’d like to put a disclaimer on a lot of the stuff I say such as: “Don’t try this at home. Offer void where prohibited, certain restrictions apply, some equipment shown is optional, quantities limited while supplies last, you must be present to win, if conditions persist consult your physician. Best regards.

I always enjoy Bill’s emails. In addition to his great sense of humor, I’ve always been curious about how the commercial fisherman, who run some of the roughest seas in the world, have outfitted their boats.

After reading his email, I thought for a minute about why my boat is so complicated in comparison to his, and I didn’t have to think long. Bill’s boat does not have air conditioning, it does not have an international power converter (Atlas System), etc. I haven’t asked, but I seriously doubt it has a hot tub. His boat is perfect for its’ purpose, just as I hope mine is perfect for ours.

Nordhavn would be perfectly happy to deliver a boat without all the extras that Roberta and I loaded onto our boat. Each owner decides what gadgetry they want on their boat, and makes the decision based on their desires, and willingness to pay for, and maintain, whatever they buy.

Our boat is outfitted to be a “portable home”. There are plenty of people who have circumnavigated in small sail boats, and we could certainly do that, but given our choice as to the level of comfort we would like, we chose to be as comfortable as possible.

So… the bottom line is: Yes. My boat does have a fairly complex electrical system, but it is designed to provide plenty of power, whether at sea, or in port, in virtually any country around the world. And, to be fair, I’ve really made it all sound far more complex than it really is. As I said in my last blog entry, power management becomes second nature after a bit of time living on a boat. It’s not something we spend a lot of time thinking about (except when writing my blog, of course!).

Post Views: 282
PrevPrevious PostProp Pitch and Power Management
Next PostThings that go bump in the nightNext