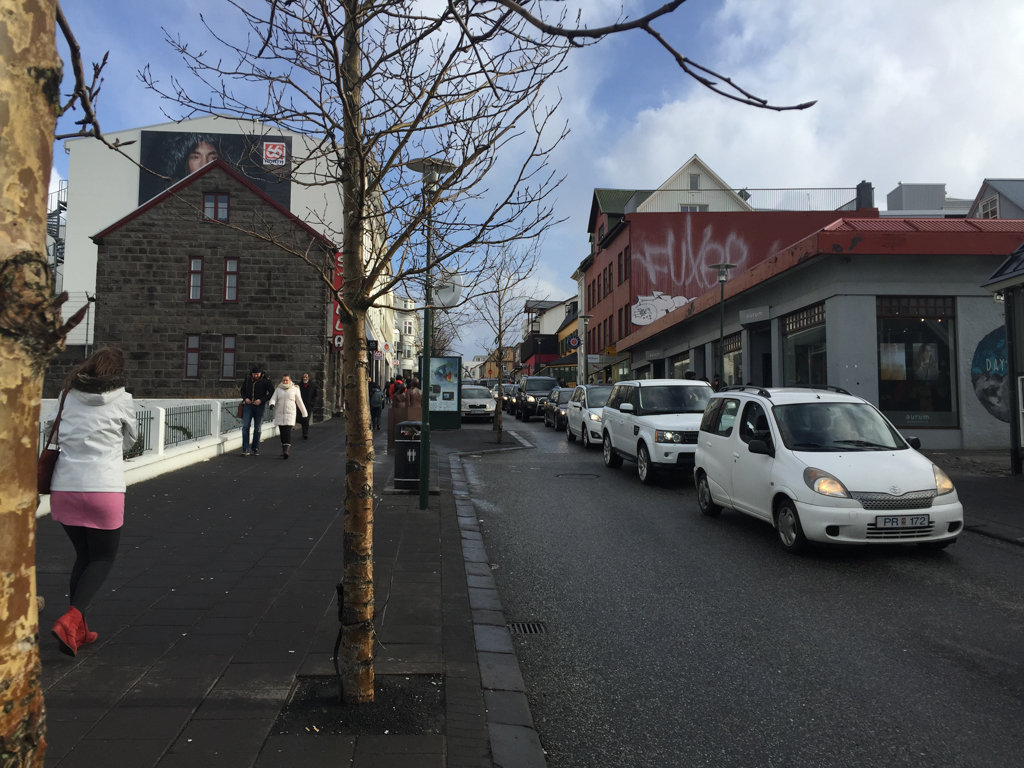 As I was tossing and turning last night, in a futile effort to sleep, I was thinking… Roberta and I are frequent travelers, but we are infrequently tourists.

Here’s what I mean … This is a very unusual trip for us. We stepped into a plane in Seattle, then a few hours later disembarked in Iceland, stepped into a taxi, went to a hotel and went on a tour.

Arriving to a new place on your own boat is a much different experience. I am not a good enough writer to explain the difference, but it is the difference between being in a place, and being presented a vision of the place. For example here in Iceland: The country has been here for many years, but tourism is a relatively new industry. As Roberta and I wandered through town yesterday, I noticed that the restaurant menus are in English with the Icelandic translation in small print. Most of the signs in Reykjavik are in English. There are posters on storefronts trumpeting, “See Iceland!” They offer the Blue Lagoon Tour, the Volcano Tour, the Golden Circle Tour, etc.

Tourism in Iceland didn’t just happen. Someone was smart enough to study how tourism works, and apply the formula here. And, tourism exploded. I don’t mean anything negative about Iceland with this comment. It just is what it is. To have a successful tourism industry you need something tourists want to see, and Iceland is overflowing with whatever that something is. The natural beauty is here. The culture and history are here. There is much of the world where if you layer on a tourism industry, nothing would happen. But, all the right ingredients are here, and tourism is alive and well.

Here’s another example… I did business in Japan for a decade prior to arriving there on our own boat. I thought I knew Japan. But, what I really knew was what the inside of the taxis looked like, and where the restaurant was at the Park Hyatt. Arriving there on our own boat was a much different experience. When you drive yourself to Japan, moving at jogging speed across an ocean, stopping at the Aleutian Islands along the way, then stopping for fuel in Russia, you get a sense of where Japan is located (geographically, and geo-politically) that you just don’t get sitting on an airplane for eight hours. Whereas the customs process for tourists tends to be a quick rubber stamp of your passport by a bored agent, arriving at a marina with your dogs and a boat is a vastly different experience. You interact with the real people on a different level. At the end of our Japan cruising experience, I wrote in my blog that “I have probably seen more of Japan than most Japanese.” When I read back that comment I almost deleted it, in that it sounded silly. But, I left the sentence, because it is almost certainly true. And, one thing that I will say I learned in Japan is that I DO NOT know Japan and never will. Because Roberta and I AND our dogs arrived on our own boat, and LIVED in Japan, I know more about Japan than the average tourist who steps off a cruise ship for eight hours, but I also now have a much deeper appreciation of the intricacies of the Japanese society and how it functions. My guess is that there are tourists who fly home from Hawaii every day believing that the hula dancers wear their grass skirts home each night.

Anyway… it’s not a particularly profound or new notion that you learn more about a society by living within it, than by visiting it for a few hours. I mention it only because I’ve suddenly realized that it has been a decade or more since we’ve “done the tourist thing” and it is a strange feeling. Disneyland looks different if you look behind the buildings than when you view them from the front. I’m not sure that is an argument for, or against, the kind of cruising Roberta and I do … but, it is certainly an integral part of our lives.

There was supposed to be a horrendous storm yesterday, but if it came then we missed it. Very early in the morning we did hear wind and rain through the window, but the day itself was beautiful with temperatures in the 30s (Fahrenheit). I felt a little disappointed because I had mentioned to a couple of people who are flying here that they should delay their flights to avoid the horrible weather. I know of at least one person who did, and they missed a lovely day. Oh well.. it just shows that weather prediction is not yet a precise science.

Roberta and I used the alleged bad weather as an excuse to lounge around the room all day, and skip out on taking tours. We never saw Todd and Donna, the other couple we are traveling with. Instead, we lazed around the room most of the morning, venturing out only when we needed lunch, and then taking a long walk around the city.

We visited a very cool looking church which dominates the skyline here in Reykjavik. We walked for over a mile along the road next to the water, in the hopes of finding a marina full of private boats, but never found one.

I suppose we could have spent the day touring museums, and there are some interesting ones here, including this one:

But, we decided to pass. Anyway … that was our day! Today will be much more exciting. As soon as I post this blog entry we’ll be doing the “Golden Circle Tour!”