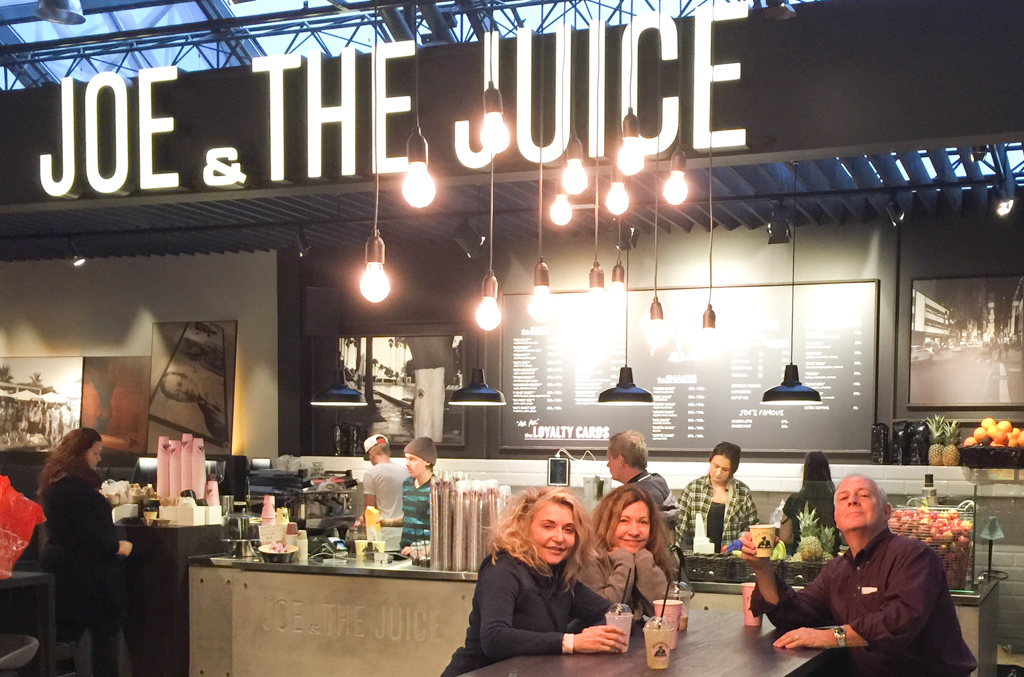 My first impression on arriving in Iceland was that we had traveled half-way around the world just to wind up back in Seattle.

We landing at 6:45am after flying all night. We would be sightseeing, so we badly needed coffee, and stopped at an airport coffee shop. The menu was 100% in English. Our baristas were 20-somethings who clearly were enjoying their jobs. Their tip jar was labeled, “Tips! To pay for our tinder dates.”

Roberta and I are traveling with another couple: Todd and Donna. They are neighbors from the Seattle-based condo building we theoretically live in, but rarely visit. We would be spending three days in Iceland, followed by a night in Oslo Norway, and then our flight north to the island of Svalbard where we’ll be seeing the total eclipse.

Prior to the trip the travel agent had asked if we wanted to visit the Blue Lagoon hot springs on the way from the airport to the hotel. I agreed, but then when packing said, “Are we really going to want to go swimming after flying all night?” and told Roberta not to pack the bathing suits. However, Todd and Donna were excited about seeing the Blue Lagoon and I was curious to see it, so we decided to go anyhow.

As we were driving, our tour guide gave us a bit of a background on Iceland.

Iceland is a large island, nearly 40,000 square miles, sitting in the North Atlantic. Despite its large size, it is home to only 325,000 people, making it the least densely populated country in Europe. Iceland is a volcanic country, with many active volcanoes. Much of the landscape is covered by blackened lava. The active volcanoes have created extensive geothermal activity, and there are hot springs sprinkling the country. Most of their electricity is generated using steam rising from the earth.

We visited one area where the ground was literally hot enough to bake bread, and steam was rising all around us from pores in the earth at over 200 degrees Fahrenheit!

I’m always curious about social issues, and our driver explained that health care is free (with small surcharges) as is education. I asked if illegal immigration was a problem, and he seemed surprised by the question. He explained that any visitors would have to arrive at the airport, as access from the sea is difficult. Of course, nothing is ever completely free. Personal income taxes run from 37% to 50%, with the sales tax (VAT) at 24%! (Note: The sales tax is only 11% on food) Given that most goods have to be imported, and with the high sales tax, the cost of living is relatively high.

Historically, Iceland’s economy has been based on fishing. However, during the early 2000s there was a boom in banking. At one point Reykjavik, Iceland’s capital was one of the leading banking centers of the world. In 2007 the banking bubble popped, leading to a collapse of Iceland’s economy. In an amazing comeback, Iceland embraced tourism and has become a worldwide tourist destination.

One surprising fact is that Iceland sits at the junction of two huge tectonic plates: the North American plate, and the Euro-asian plate. The two plates are slowly drifting away from each other (just a few centimeters each year), and will eventually split Iceland in half. A rift is visible, and there is a bridge which crosses the rift, allowing you to literally have one foot in each of two continents.

After a day spent sightseeing we napped the afternoon away, waking at dinner time for our first walk through town.

Reykjavik is a town loaded with 100s of restaurants and a very active nightlife. I had been worried prior to the trip that I’d starve on this journey. I’m not a particularly adventurous eater and the Icelandic menus I reviewed prior to the trip featured meats like reindeer, seal, whale – and, “horse.” As we hiked, I realized that food would not be an issue in Reykjavik. I saw all nationalities of food: Italian, Thai, Indian, Mexican, etc. We settled on a sushi place with a great looking menu.

At dinner, I asked the question, “What does Iceland do with their old people?” Walking through town, and in the restaurant, I saw no one over 30 (except us!) Perhaps it was just that it was Friday night, but we were surrounded by attractive young men and ladies. Actually, it was mostly young ladies. Todd even asked our waitress, “Where are the men?” After an excellent meal, we returned to the hotel, asking people we passed about the nightlife, and which nightclubs we should visit. It was about 9pm and we were informed that the clubs didn’t open until midnight. There was no way we were staying up that late. We were all falling asleep, and after stopping at a couple of other amazing looking restaurants to make reservations, we returned to the hotel for some much needed sleep.