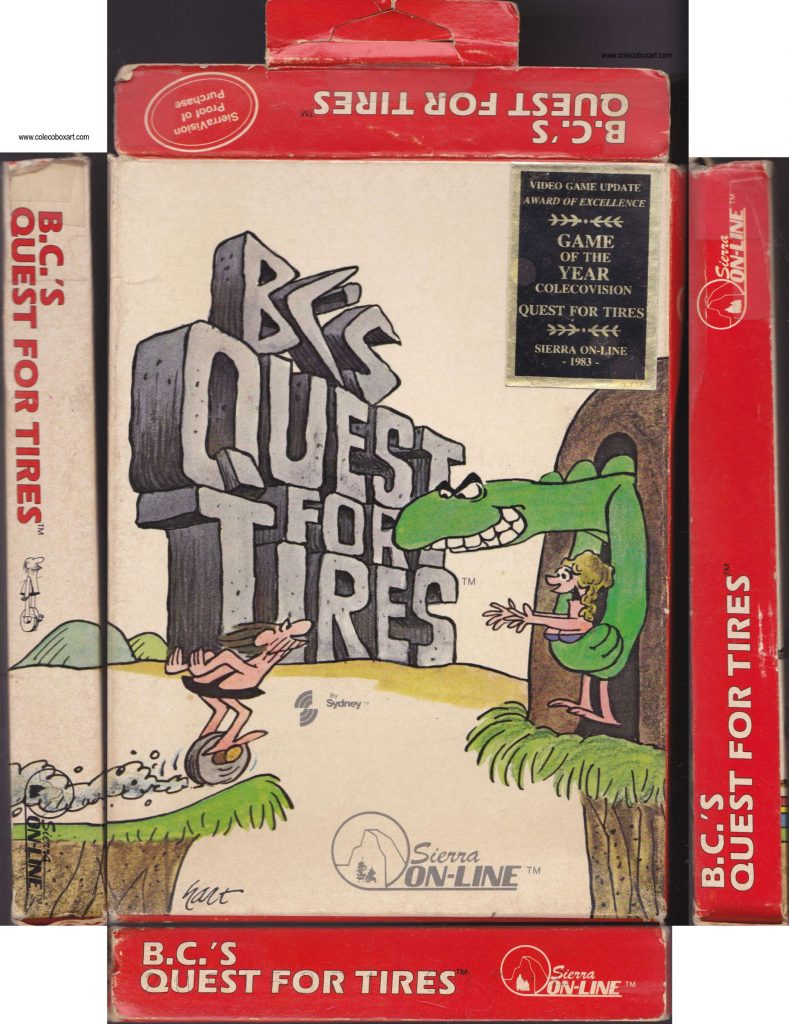 Back in ancient times (the mid 80s), in my former life as a software publisher I published a video game called “BC’s Quest for Tires.” What does that have to do with boating, or even our trip to the North Pole, you might ask?

Well… technically nothing, but given that the alternative is that I write about packing suitcases for our upcoming journey, I thought my blog readers might forgive this slight off-topic digression.

When we are in Seattle, as we are now, I always try to go to breakfast with our younger son Chris. He’s a software geek like his dad and I’m very proud to say that he works for Amazon. I arrived at the diner first, and was seated at the table, when Chris came wheeling down the street perched on nothing but a wheel. It looked exactly like our old video game!

Apparently, there is a company, called “Airwheel” ( Check out this video->

) Chris had asked for one for Christmas, but I refused to buy it for him, knowing instinctively that riding through downtown Seattle on such a thing would be suicidal. Chris tried to look excited about his new sweater, but went and bought an Airwheel for himself, and learned to pilot the thing while we were in Cabo. He now “drives” it back and forth to work each day.

Downtown Seattle is not flat. Chris claims he has no trouble climbing the gentle hills required to get home from work. I asked if he uses the bike lanes (Seattle seems to have more bike lanes than car lanes) and he said, “No,” he takes the sidewalk. I asked what happens when he encounters people walking. “I slow down to walking speed until I see a chance to pass.” Being a reasonably intelligent father, I explained to him what would happen if he fell into the path of a car. And, Chris, believing himself invincible as all young men his age do, looked at me like I was an idiot and explained that he couldn’t possibly get hurt. It reminded me of the look in my own father’s eyes as I explained that I wanted to cross oceans in a boat. To his credit, my dad never tried to talk me out of it, but I have no such class and lobbied Chris hard to use some common sense (or, at least a helmet and some football padding.) I sincerely hope that this article does not send any of you out to buy one of these things. Pioneering a new mode of transportation on the streets of a highly congested city seems to me a truly dumb idea.

As I was watching Chris cruise down the street, zigzagging along, I suddenly felt I was getting a glimpse into the not-to-distant future. I never believed in the Segway (another similar invention that many predicted would be the next big “thing”, and wasn’t.) But, this thing felt like it has a future. I liked that when Chris entered the restaurant he simply picked it up and brought it in. Carrying it into the restaurant it looked no bigger or heavier than a laptop. He said he whizzed the two miles or so to the restaurant in under 12 minutes, and would be riding to work from the restaurant.

As a boater, I could easily envision having a couple of these things sitting in a closet just waiting for us to arrive at some distant port, and then zipping down the dock and into town. Chris did say that learning to ride was a long painful process, but lots of things are that way. Seattle is a town of what I’ll call “early adopters of new technology”, so I asked Chris if he had seen others going to work on Airwheels. He said he had only seen one other person, and couldn’t catch up with them to say “hi.” This gave me another opportunity to explain to Chris that when even Seattle people won’t try something he should know better. Hopefully he will be careful.

Anyway… I do hope they find a way to make these things easier, and safe, because for a moment there it really was pretty cool watching Chris zoom off to work.

Tomorrow – we fly to Iceland!