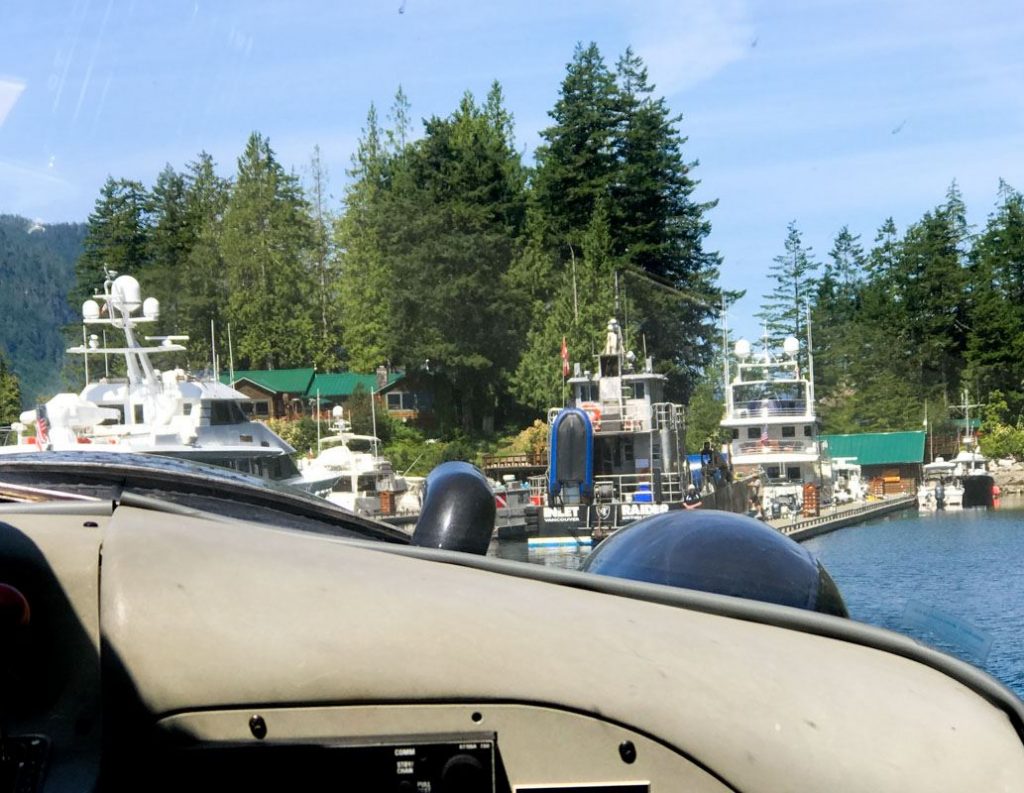 Greetings all! Roberta and I have now moved aboard the boat for the summer.

But, before I get to that, I thought I’d show this picture I snapped when we were home in Seattle for July 4th.

It’s a little hard to make out what you are seeing, but it is Lake Union, an inland lake adjacent to the Space Needle in downtown Seattle. Every July 4th a massive fireworks display is launched from a floating barge on the lake.

The best place to see the fireworks is from aboard a boat! If you look closely at the picture you’ll see hundreds of boats all floating and waiting for the show to begin. Roberta and I haven’t done it in a while but the real action happens before and especially after the fireworks show.

There is a narrow channel called the Montlake Cut, which passes through the University of Washington and connects Lake Union to Lake Washington. If you’ve ever gone to a sell-out football game and tried to get your car out of the parking lot after the game, you know what it’s like to be stuck in a crowd. Now imagine that instead of cars the deadlocked crowd are boats, some large, some small. I’ve gone through the Montlake Cut on our boat within a few feet on all sides of canoes, tenders, sailboats, powerboats, and more. When I think about the tense moments I’ve had as a boater, it isn’t the Bering Sea I remember, it’s that ride home after the fireworks.

I had a delivery crew (Jeff Sanson of Pacific Yacht Management) run the boat one hundred fifty miles up the coast to Dent Island. This allowed us to be home with family for July 4th while Jeff cleared the boat into Canada and ran it up the west coast of Canada. Roberta and I will cruise further north from here, and then run it back to Seattle at the end of the summer.

In my last blog entry I spoke about Kenmore Air. Roberta and I were able to leave our home in Seattle and be on our boat 250 miles north three and a half hours later. They took us directly from Lake Union to the dock with our boat! (including a quick stop in Nanaimo Canada to clear customs and take on fuel.)

For those not familiar with the Dent Island Lodge, I should give a brief overview…

Roberta and I wanted to start our summer off by spoiling ourselves with a bit of luxury. The Dent Island Lodge is a small resort, only thirteen rooms, with a small attached marina. There are no roads to Dent Island. You either have to float plane in, or arrive by boat.

The Dent Island Lodge is not cheap. Rooms are $625 a night and moorage for our boat runs nearly $300 a night. Guided Fishing Packages run $1,000/night/person. That said, if you can afford to be here, it is a bargain wherein the value you receive far exceeds the money you pay. The team, led by General Manager Justin Farr and his wife Trish Farr take very good care of all who arrive here. It’s like a Four Seasons Hotel experience, with amenities like: internet, fishing, tours, sauna, gym, hot tub, hiking trails, etc., but in the middle of nowhere surrounded by some of the most gorgeous scenery in the world. How they can make this possible, and keep the resort so beautiful, given they are operating only a few months a year, I do not know.

There are a lot of big boats here (80’ to 130’) but small boats are also welcomed. Roberta and I cruised our 27’ power cat here a decade ago and spent an unforgettable few days at the lodge.

The Dent Island Lodge has two restaurants; a main restaurant, and also a smaller one adjacent to the river that only seats twelve guests around a small chef’s kitchen. A six course dinner is prepared and served with the chef interacting with those around him as he cooks.

One reason we wanted to start our journey from Dent Island is that it is surrounded by some very nasty rapids. We’ve been cruising in the Med (Europe) the past few years and one nice thing about cruising the Med is that there are no tides or currents to deal with.

To cruise this part of the world you need to pay attention to the tides and currents. Tides can rise or fall by ten feet or more. Currents can run easily five to eleven knots through narrow passages. Traveling at night is made impossible by logs in the water, and traveling during the day often needs to be carefully timed in order to arrive at the narrow passages at slack water (when the water is changing direction as it ebbs and flows from the inside passage out to the ocean.)

Some of the nastiest rapids and narrowest navigable passages surround Dent Island. We thought it a good place to start our journey because we could explore via tender, and the resort’s jet boat, to get an up-close and personal look at the rapids before taking Sans Souci through them.

One very interesting part of our Jet Boat Tour for me was the chance to see the Dent Island Turbine, which was installed just days ago.

When you are at the Dent Island Lodge it feels like you in civilization, but don’t let that fool you. The resort needs to make its own water and electricity. All groceries need to be brought in via boat from Campbell River thirty miles away.

And .. because they cater to Big Boats, there are BIG electrical demands. I am using 100 amp power and the boat behind me has two cables out, as do several others.

I have investigated using the Tesla batteries as emergency power backup for our home and decided that they weren’t really ready for commercial use. I guess I was wrong as they are being used successfully here!

Currently the batteries are charged by a conventional generator, but soon they will be powered by a floating turbine, a major “first.” Because Dent Island is surrounded by powerful rapids, it makes sense to try to harness some of that free energy. To do this the Dent Island  Lodge, with assistance from Canada, built a large barge with a giant paddle wheel. It is anchored in a place with near-constant current and will soon be used to charge the huge bank of Tesla batteries.

A very interesting and pioneering project. I asked how hard it was to get approvals, and the answer was, “Hard. But, being a green energy project helped.”

A few more pictures from our ride….

And, in closing – here’s a short video I made of our jet boat ride around the island, followed by the resort’s marketing video taken from their website.

(CLICK HERE) for the resort’s own marketing video with a better look around the place.

Thank you!
Ken and Roberta Williams (and the pups – Keely and Toundra)
Nordhavn 68, Sans Souci
www.kensblog.com

Post Views: 699
PrevPrevious Post[Kensblog] Testing the use of video in my blog entries – Flying Kenmore Air
Next Post[KensBlog] 2017-02 Dent Island to Port McNeilNext