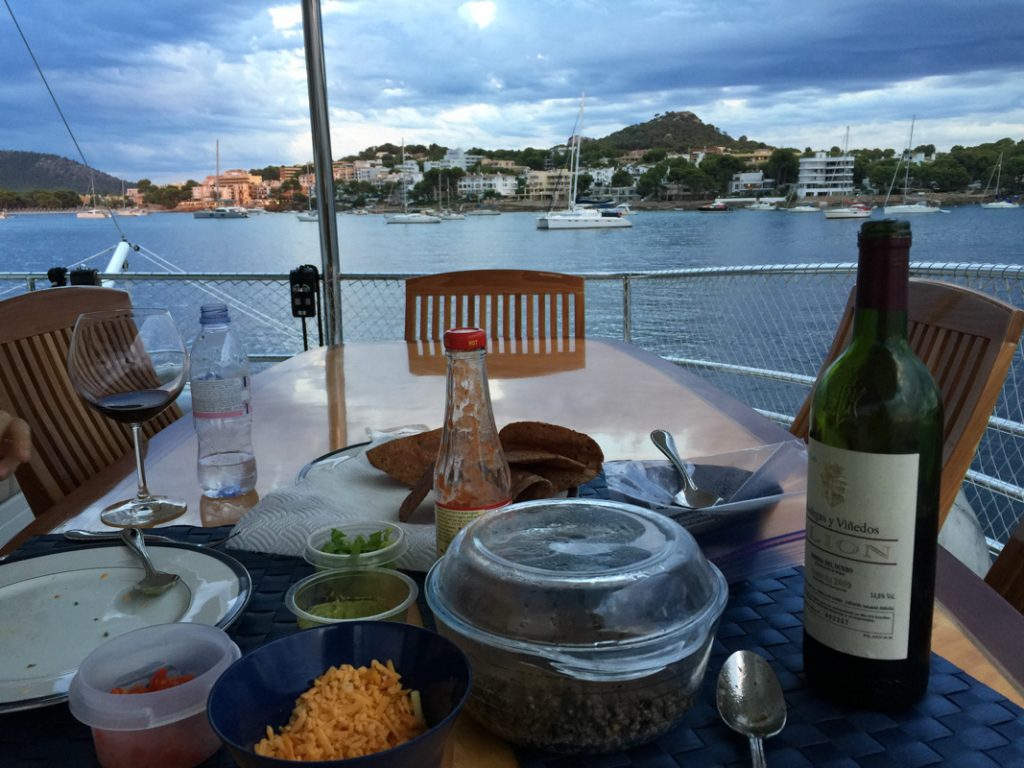 I am typing this from at sea. We have now departed Mallorca and are on our way to the island of Ibiza. It’s a fairly short seven hour run and we’ve spent much of the ride talking about, “Where do we want to drop the anchor? Which bay? The north side or the south side?”

Yesterday, I sent a blog entry grumbling about the some of the rough nights we’ve had at anchor this year. This triggered several emails asking why we don’t consider having crew onboard, including this one:

I have been enjoying your blog since the start. I always read every word and enjoy reading about your adventures. The last post makes me believe that you would be wise to hire someone to crew on your boat. They could watch the boat at night, watch the boat when you go to shore, help you med moor the boat, ( not difficult with 3 people) clean the boat during the day, help with passage making, do the oil changes etc. I know you don’t like crew members but after reading your blog today, you don’t sound happy.

Anyway, my suggestion for next cruising season is to get a crew member to do the stuff you don’t enjoy doing ( like staying up all night on anchor watch) and enjoy the good parts of boating more. Take care and keep up the great blog!!!!!!!!!!!!!!!

Roberta and I have discussed having crew. It isn’t the expense that bothers us, although that is certainly an issue. The bigger issue is that we would be living with another person (or two) for months in a very tight space. In Europe it is common to have crew on virtually all power boats over about 40’ in length. As we were leaving the anchorage this morning we passed a steel trawler, roughly the same size as our boat, which had FOUR crew! We watched the crew coming and going much of the day yesterday delivering the guests to shore.

Meanwhile, we were stuck on board. We had planned a nice dinner in town, and even picked a restaurant. But, we woke to heavy rain yesterday morning and higher wind than forecast. We decided that if it didn’t clear up by 4pm we’d have dinner on the boat. It takes time to thaw meat before cooking. 4pm came and went with the weather staying bad, so instead we put out some hamburger to make tacos for dinner. Thirty minutes later the weather cleared and we thought about putting the meat back in the freezer, but .. the momentum for going to a restaurant had been lost, and tacos were sounding good. Instead we tendered to shore for just a few minutes to take some trash and give the doggies some excitement.


As we were passing the tender loaded with very official looking uniformed crew from the big steel trawler Roberta said something like, “How would today have been different if we’d had crew?” I thought about it and said, “Well… the crew would be sitting here bobbing at anchor after having dropped us off a couple days ago at the nearest Ritz Carlton.” I was serious. From the Ritz Carlton (or, Four Seasons, or .. some other nice hotel) we could rent a car and drive anywhere we want to explore the island. But, Roberta was horrified by the idea. “I’d rather be on Sans Souci!,” she said. This didn’t completely make sense to me so I asked for an explanation.  “All of my stuff is here. Sans Souci is comfortable. I wouldn’t want to have to pack and unpack.”

I wasn’t finished with questioning. “Well, then perhaps we would be able to ask the crew to take us into port.” Roberta responded, “Yes. I guess. But, I don’t really like being in port.” I was digging deeper, and said, “Well. If it was a really rolly night, perhaps we could tell the crew to pick a direction that is comfortable with the swell and run us to a new anchorage.” I said this because sometimes if you are underway in lumpy seas it is actually more comfortable than sitting still. Sans Souci has stabilizers that help reduce the motion of the sea. One thing we have noticed with the crewed boats is that they don’t hesitate to move. If Roberta and I are at anchor and we notice that it is smoother on the other side of the bay, we tend to say, “Hey look! It’s smoother over there.” And, then we go back to what we were doing. Unless we are miserable the effort to pull in the flopper stoppers, rig the tender for towing, pull the anchor, do the engine room checks, run the boat, drop the anchor, and put the flopper stoppers back in the water – just isn’t worth it. Whereas with crew, it just happens. The crew almost seems to like having something to do. When we see the boats around us, they shift positions at the drop of a hat. We often see them pull anchor only to go to a different beach for the day and return before dinner. Or, even during dinner take the boat out for an evening cruise so that the guests have a nice view while they eat.

That’s a different world than I live in.

Arguably the incremental cost for crew wouldn’t be THAT much higher than what we spend today. I say that because of how Roberta and I operate. We have a mechanic we trust who is Seattle-based. (Actually, that is being unfair to Jeff – he is a LOT more than ‘just a mechanic. He’s a boat-god and takes very good care of Sans Souci.’) We pay him at the start and end of the season to fly to the boat and do whatever needs to be done. Often he is accompanied by one or more members of his team. Flying him around the world does not come free. But.. the nice thing is that we don’t see him.

Roberta and I talked about lots of things, but we never really talked about the real issues. There are three BIG reasons why we don’t have crew.

1)      Privacy. We can’t imagine the idea of having someone around the boat who sees what we do. In reality we don’t do anything interesting. Mostly we sit at our computers, or make dinner, or swim, or watch tv. Watching us do those things would get old quickly. It’s the idea that someone is looking over our shoulders that bothers us. And, the feeling that we need to be “on”. We wouldn’t be able to wander around the boat in our underwear if we want. I’d probably want to shave more often. There’s also the issue of sharing the galley. This is not a large enough boat to have multiple galleys or multiple laundry rooms. I don’t know how other boats our size do it. I guess for them the benefits outweigh the downsides. I asked one acquaintance with a similar sized boat to ours where the crew dines. His answer: “With us.” He went on to explain how great his crew was, and that they are like family. I can say that I have some great family. We have as good a parents and children as anyone could want. But, do we want to live in a 70’x22’ box with them for months at a time? (I won’t answer that because I could get in trouble!)

2)      Challenge. Boating is challenging. It’s something that we take pride in doing well. There is a sense of accomplishment. There are a number of skills required: Navigation, Electrical, Mechanical, Critical thinking, etc. Crossing an ocean, or even exploring a foreign country is a challenging endeavor. When you succeed it is an amazing feeling. It’s like a hiker who wants to climb a mountain. He could pay someone to hike the mountain on his/her behalf. But, what would be the fun in that. If the hiker were to give a report half-way up the mountain, it would be filled with comments like, “I’m pouring sweat. My knees hurt. My toes are bleeding. I’m out of breath.” But .. catch him at the top. He might not be able to share how he feels, because he  is too exhausted. But, I guarantee he will be smiling. In the final analysis, it is the sense of accomplishment that we love.

3)      There’s no need. We have probably cruised close to 50,000 miles, including crossing the Atlantic, the Bering Sea and visiting 25 or more countries. Out of all of that, we have only felt the need for crew a few times. On the ocean crossings we brought on some crew. They came. They went. We can always bring on crew when we want them. But, most of the time we can do it ourselves. The last few weeks I did do some whining. But, it was based on a particular place, at a particular time, with a particular set of weather. The Western Med thinks in terms of power boats having crew. They have a system in place for moorage that really assumes that larger power boats have crew. We don’t and that added a challenge. Even the anchoring is somewhat oriented around smaller boats that can tuck into places we can’t get to, and larger boats that have crew to easily put them into ports or places that are calm. And, even with that said, if we were coming back next season, I don’t think I’d add crew. This is a mountain we’d rather climb ourselves than pay someone to climb on our behalf. It’s within the limits of what we can do, and soon the boat will be back in the US, where the cruising is oriented towards boats our size NOT having crew. We’d look very out of place and spoiled with crew.


Thank you!
Ken and Roberta Williams (and Toundra and Keeley)
Sans Souci, Nordhavn 68