[KensBlog] We’re having a SWELL time at anchor, but occasionally it’s a DRAG 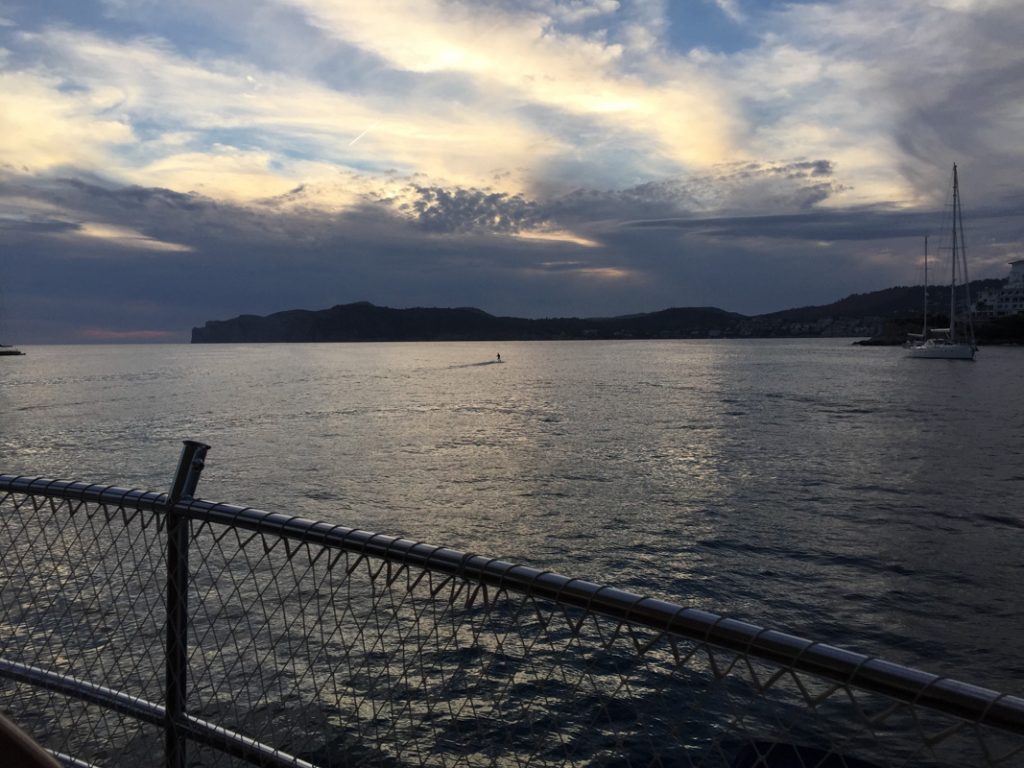 I am typing this at 6:40am. I have been sitting in the pilot house watching the monitors since 5:30am.

A bit of background….

Normally, Roberta and I love to be at anchor. We tend to think of the boat as a means of transportation whose primary purpose is to deliver us to the good anchorages.

However, in a complete reversal of our normal behavior I sent an email to my friend Steven Argosy (Nordhavn 62, Seabird) yesterday saying that we had moved our flights to go home a week sooner, and that a huge factor was that we were tired of being at anchor.

We have been at anchor the majority of the time over the last two months. Most of those two months have been great, but not all. We have struggled with swell and wind. There have been many nights without much sleep. We have had a couple of instances with dragging anchors, including another one yesterday.

The Western Med (Italy, France and Spain) do not have a huge number of great anchorages. All of the Med is known for high winds, but wind is not a problem if you are sitting in port, or in a well-protected anchorage. In Croatia, Greece and Turkey we sat through winds over 30 knots that lasted for days, but they were non-events because we were in anchorages that offered good protection.

Starting last year with Italy, we have had a heck of a time finding well protected places to anchor. We have it better than most, in that Sans Souci is a heavy boat and we have flopper stoppers. Typically we roll the least of any boat in an anchorage. No one should feel sorry for us. That said, most other boats have options that we do not have. Most boats head to port when the wind blows, whereas we do not have that option partially because it can be hard to find moorage for a boat our size in high season, and primarily because it is hard for Roberta and I to enter a port (Med-Mooring) without assistance. It is also probably true that a lot of the boats around us are more accustomed to “toughing it out” and do not mind the roll. Most of the boats around us are sailboats in the 20 to 40 foot range, and they roll unbelievably. It must be miserable inside of those boats, but they don’t seem to mind.

One moment that stands out from a few nights ago. It was 2:30am, and we were rolling quite a bit from side to side. Normally I put a second line on the tender when we go to bed, just as an extra layer of protection. We had traveled all day and I was exhausted and forgot to add the second line. Given the swell, I decided I shouldn’t wait until morning to add another line to it. So, I went back to the swim step which was rising and falling quite a bit, only to discover that my towing line which had been sitting on the swim step had fallen into the water. It shouldn’t have been left sitting on the swim step, but … sometimes when fatigued, mistakes happen. The tow line was still attached to the boat but part of it was flopping around in the water. So, there I was at 2:30am, being bounced around on the swim step, hauling in a loose tow line, and re-tying the tender. All of that went fine, so I decided I should probably check that the swim ladder (a small ladder that comes from under a trap door in the swim step) was secured. To open the trap door I had to lie on the swim step, and as I opened the door the boat descended into the swell. Water gushed up from beneath the opened hatch and became a geyser totally drenching me in salt water. Was I happy to be laying on the swim step in the dark dripping salt water at 2:30am after a long day and sleepless night? Well …no. It was my own fault, but I can’t say it was fun.

We are in the Balearic Islands (Mallorca, Menorca, Ibiza and Formentera.) They are beautiful and fun islands, but the anchorages are often filled with seaweed, called Posidonia. Apparently Posidonia is important to the environment and is being aggressively protected. Laws have been passed protecting the Posidonia. Boats anchoring on it can be fined and there are patrols to keep you honest.

Mooring buoys have been placed in anchorages and boats are encouraged to use the mooring buoys. It’s a nice system in that boats can go to a website and reserve a specific buoy in a specific bay for a specific date, and there are people assigned to see that you get your buoy. A boat could explore the Balearic islands without ever needing to drop their anchor. However, the buoys can only handle boats of a certain size and Sans Souci is beyond that size (I think the limit is 15 meters, and we are nearly 22 meters, plus very heavy.)

Dropping an anchor on Posidonia is not easy. The anchor slides across the top rather than digging in. In order to get good holding you need to seek out a patch of sand and drop the anchor on the sand. In rare bays there is lots of sand to pick from, but in many, such as where we are now, most of the bottom is covered in Posidonia with occasional splotches of sand. To anchor I had to stand at the bow looking down while Roberta drove the boat until I found a tiny patch of sand. We then put the anchor onto the sand and hoped it set on the first try (which it did.) If we had to re-anchor at night where we couldn’t see the bottom … I’m not sure what we’d do.

Boats anchor where they can find a patch of sand, not where they can obtain the most space for themselves. This causes boats to anchor closer to each other than they normally would.

–          Boats are anchored close to each other, limiting the amount of rode (chain) you can put out

–          Finding a place to anchor is difficult, and when you do, you can still have a problem if the boat rotates 180 degrees. When the boat rotates around the anchor it can come unstuck. This could potentially place it onto Posidonia where it will slide like on ice, rather than re-setting

Yesterday was frustrating. We rolled all night making sleep difficult. Then, during the day we dragged in light winds after the wind changed its mind directionally so many times that we were spinning around the anchor like a second hand that couldn’t figure out which direction was clockwise. We noticed immediately, and quickly re-anchored, but it undermines confidence and caused us to cancel dinner plans ashore. If we can’t trust the boat to stay put, how can we leave it? We were well-set and had been here a couple days, but with the constant shifting of the wind, and constant jerking of the boat due to the swell, the anchor came unstuck. Normally it would re-set itself immediately, but Posidonia has a mind of its own.

Our view while dining on the aft deck of Sans Souci last night. As you can see, we weren’t suffering. One thing to note — see the guy that looks like he is walking on water? He is on a motorized surf board of some sort. It is smaller than a surf board though; more like a single ski. He circled the entire bay for over an hour! I’ve never seen such a thing before. Very cool! He never fell and seemed to be doing it more for his evening’s exercise than for sport.

Anyway … I am making this sound much worse than it is. There have been plenty of good times, and we are having fun. It is just the luck of the draw with respect to the weather. Sometimes you win and sometimes you don’t. The swell has been like a dripping faucet in an otherwise beautiful home. Over time, hearing the drip drip drip can make you crazy.

This looks like my normal navigation screen — but, what you can’t see is that it actually an ipad. On nights when I want to monitor the situation closely I use Remote Desktop running on an ipad to connect to the ship’s navigation computer. This lets me see at a glance, while still lying in bed, where we are in our “circle.” The active circle when this picture was taken is the one on the right. The circle on the left is from earlier yesterday, and as you can see in the green tracings that go outside the circle — we dragged after holding position for two days. Ignore the red. It is an old track from when we first dropped anchor.

Each ring on the radar represents 150′ of distance. As I’ve mentioned previously my normal goal is to get three rings from other boats. That is unrealistic where we are cruising. But, you can see we did fairly well and have two empty rings around us — which is much better than most of the other boats.

I was up early because we had a couple squalls this morning (sudden rain and wind.) They weren’t bad, and under normal circumstances I’d ignore them. But, given how close we are to the other boats I’m sitting anchor watch.

Today is supposed to be the last day of the wind and swell. A period of calm should be settling in. We expect to be headed for Ibiza tomorrow at this time and these days of bad weather will soon be a distant memory.

Thank you!
Ken and Roberta Williams (and, Keeley and Toundra)
Nordhavn 68, Sans Souci