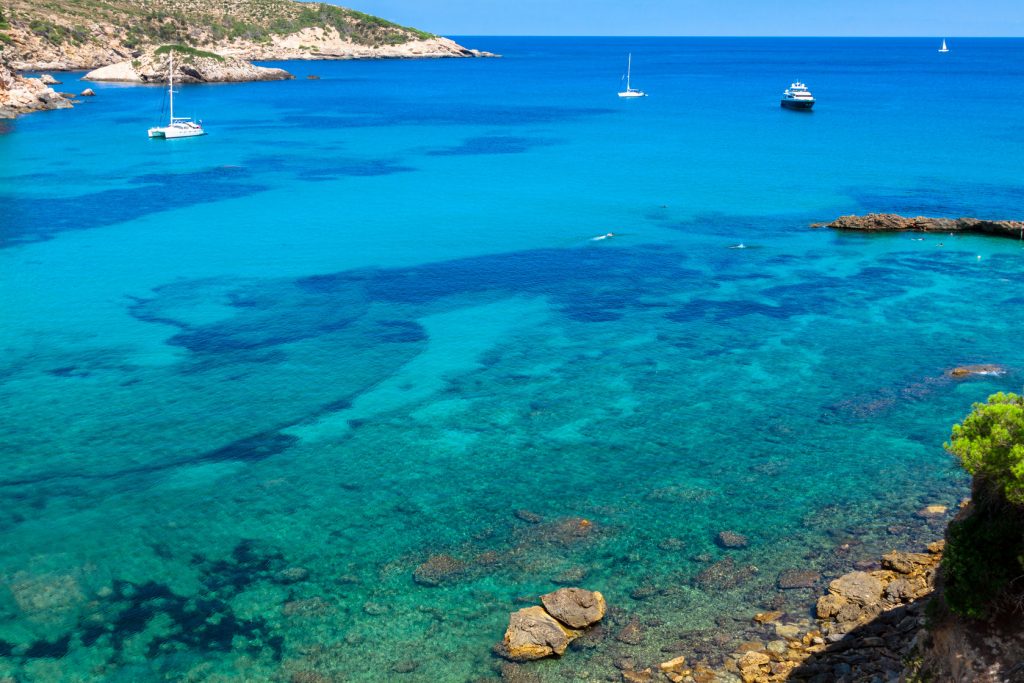 We were up at 6am for our 60 mile run from the island of Mallorca to the smaller island of Ibiza.

Wikipedia has this to say about Ibiza:

Ibiza has become famous for the association with nightlife and the electronic music that originated on the island. It is well known for its summer club scene which attracts very large numbers of tourists, though the island’s government and the Spanish Tourist Office have controversially been working to promote more family-oriented tourism

Ibiza is best known as a party island. Young people, predominantly British, come here to dance all night and tan all day. Our nightclubbing days are long past. Once, a very long time ago, we did try to check out the nightclub scene on Ibiza, arriving at an enormous disco at 10pm. We were about the only ones there. At 1am when people started trickling in we were already way past our bedtime and gave up. I have no doubt that thousands of people did show up, but we were long gone by then.

Tonight we will probably see and hear more of “the action” than we really want to, as we anchor off San Antonio, one of Ibiza’s nightlife towns. Weather kept us on the boat for several days in Mallorca. We want to be able to go into town for a nice dinner tonight.

Ibiza, and the nearby island of Formentera, have many options for anchoring, but where we anchor is dictated by the wind. As the wind shifts, so do the boats. The wind is now coming from the south so our options are limited to anchorages on the north side of the island.

We’re not complaining. We had planned to go to San Antonio yesterday but as we were cruising we were looking at pictures of the anchorages we would be passing and couldn’t resist stopping at one.

We dropped anchor at one of the first ones we passed; Cala Xarraca. As you’ll see in the pictures it is incredibly beautiful.

I have absolutely nothing to report from our day yesterday, except that we had a wonderful time. Days at anchor like yesterday make all the tougher days worthwhile. We were lazy, accomplished nothing, and loved it. We never left the boat other than to jump in the water. Instead of dinner Roberta made popcorn, and we watched the old movie Braveheart with the doggies.

So … given that I have nothing to talk about, I’ll finish off today’s entry with my favorite email which I received as a result of yesterday’s blog entry:

I got a chuckle out of your description of paying someone to hike to the top of a mountain. Late last year we decided on the spur of the moment to bring Orion back to the West Coast rather than spend another year on the East Coast. Gerry favored shipping her or hiring a captain to bring her on her own bottom. My response was, “Paying someone to move my boat is like paying someone to make love to my wife! After all the expense and effort keeping her ready to go to sea, I want to be onboard when it happens.”

Post Views: 509
PrevPrevious Post[KensBlog]Crew for Sans Souci?
Next Post[KensBlog] At rest stabilization? An email from a blog readerNext