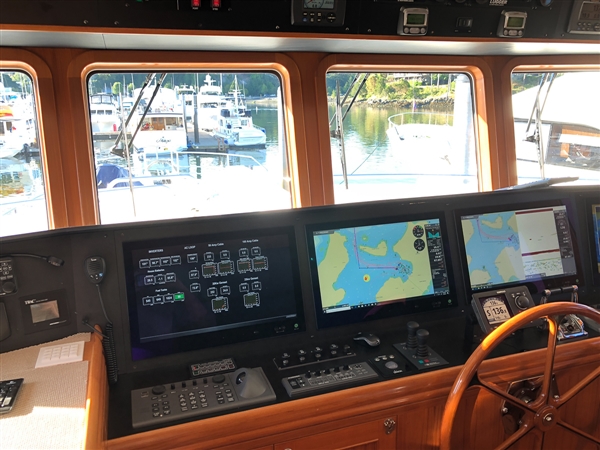 Roberta and I really have only one goal for our cruising this summer: To relax. It’s a long story, but we’ve had a lot happening in our personal lives over the past year (sold our place in Mexico, building a house, help one of our mothers move into a senior community, among other things).

Our goal is to find a couple of quiet anchorages, tune out the world, and just be mellow for a while.

After several days of enjoying ourselves at our home port of Roche Harbor in Seattle we decided it was time to venture out into the world.

Here you can see where we anchored the first night. That’s Roche Harbor in the background. As you might guess, it wasn’t a long day of cruising.

Our slip at Roche is on a tight fairway. Getting the boat in or out of its slip is easy when there is no wind. But if the wind kicks up it can get a bit more exciting.

Also, and more importantly, we just like the feeling of being at anchor more than being in a boat slip. I remember once asking Steve Dashew, a legend in the marine industry, how much trouble he had finding a slip for his 83’ boat in Europe. He looked puzzled and asked, “Why would you want to go into a marina?”

I don’t know if I should be embarrassed or proud, but during the off-season we got a new hot tub, and had to completely replace the guts of our barbecue. It says something about what equipment gets used the most on Sans Souci, and our first night at anchor of the season was cruising at its best. Steaks, baked potatoes, salad and red wine, followed by hanging out in the hot tub looking at the stars. When boating is good, it is very good.

In the picture above you might notice the blue shades. We have a series of panels that roll-down from above and surround the dinner table behind the pilothouse. We drop these to block the sun so that we can have dinner in comfort. It can be a bit trickier than it appears, in that the boat rarely sits still while at anchor. It shifts direction with the wind or current. It is not uncommon for the sun’s position to change during dinner and another sunshade panel to be required. Like a fly on an elephant’s back, it’s a minor annoyance, but overall the shades have been a tremendous add-on to the boat.

A glance at the weather report showed that the next morning there would be a wind warning in effect and by the evening a gale warning was anticipated. Sans Souci is a strong boat and would be fine in those conditions, but one thing we have learned well is that when given the choice of cruising on lumpy seas or flat seas, flat seas is better.

Thus, we decided to “beat the weather” and departed at daybreak the following morning for Victoria, Canada, a short 30 mile run.

Even though we prefer anchoring to being in a marina, we had committed long ago to a marina in Victoria. There were a few reasons:
Here’s a short video I made showing the helm during our trip. Even though the seas were calm, it was a bit more interesting of a journey than it appears. We had to go through some minor whirlpools. Whereas I pay these no attention under normal conditions, I was dreading them. Regular readers of my blog may remember that on our last run I hit a whirlpool and the boat spun around. It wasn’t a large whirlpool and shouldn’t have been a problem, but as I tried to steer out of the whirlpool I discovered we had no steering.

It could have been a dangerous situation, but luckily, Sans Souci has twin engines and can be steered with the throttles. Thus, we had no trouble limping back to port.

Here’s a cute and short video that I took of Roberta trying the steering wheel. The steering wheel was hardly working. I was having to spin the wheel dozens of times to get even one degree of turn. I asked Roberta to give it a try, and in this video you see her spinning the wheel to no effect.

Once back to port we had to diagnose the steering problem. The problem turned out to be simple. Apparently someone had accidentally bumped a valve at the back of the lazarette which shuts off the hydraulic line that steers the boat. Some fluid was getting through, but not enough to steer the boat. Once the valve was opened the problem was solved.

As a byproduct of digging into the steering issue I decided to add a new gauge to my Maretron monitoring system that would give me real time feedback on the pressure of the hydraulic steering fluid. I am loving the easy extensibility of Maretron!

Our clearing into Canada was much simpler than expected. On approach to Victoria there is a long customs dock (Over 150’ long!) We arrived early in the morning with no other boats in sight. I stepped off the boat to a telephone and was immediately connected to a customs/immigration agent. He asked some easy questions and then gave me a number to display in my window. In minutes I was back on the boat.

Victoria Canada is at the back of a narrow channel with several marinas right in front of the town. Every boat entering or exiting Victoria traverses the very busy channel, as does a multitude of float planes, water taxis and even a giant ferry. Victoria Harbor Control told me to watch for a blinking light at the top of the green/red markers, and wait for it to go out. That would indicate a break in the action and I could scoot directly across the channel to the marina.

To my surprise, we were the only boat in the marina! I didn’t object. Any time I can enter a marina and have easy access to a slip, it’s a good thing.

The marina is unusual in that it targets only super-yachts. The smallest slip is 90’ and most slips are 120’. They hope to attract larger, typically crewed, larger yachts cruising in the area.

I was warned that the marina is a bit out of town. Prior to arrival I asked the marina’s concierge to get me a car and one was waiting when we arrived.

Although the marina is just getting started I could already tell it is going to be amazing and will be a very popular stop for the larger boats. The marina offices have meeting rooms, places for the crews to hang out, and world class concierge services.

I had been told to expect an amazing wax job, and as I type this there are four guys working on the boat. They have been at it a couple days and will be back tomorrow. EJ’s company is: www.topnotchyachts.ca Their work is incredible and it is worth a trip to Victoria just to have them work on your boat.

There was one other project I wanted to get done while we were in the marina.

In the picture above you can see our 50 amp shorepower cable dangling into the boat. I have a shorepower retrieval system, called “Glendinning” that theoretically makes it a simple button push to put the cable in or out. I say theoretically because I’ve had problems from the beginning with my system. I have two different cords; a 50 amp and a larger 100 amp. The larger one, the 100 amp cord, works properly but the 50 amp cord hangs up. I spent last season with the 50 amp cord dangling into my cockpit, and it happened again when we departed Roche.

I have spent thousands of dollars with mechanics over the years fighting this problem, and decided the time had come to solve it once and for all. I hired a local electrician and had him remove the automated system for the 50 amp cable. It is a bit of a radical solution but solves the problem permanently. I now have a connector on the back of the boat and can keep the 50 amp cable coiled up in a locker. I only use the 50 amp cable on rare occasions so it really isn’t a big deal.

And, not to get too technical, but there is a change I made which is working out terrifically so far. I now have autostart on the boat’s generator. Whenever I disconnect the shorepower cable, or the dock loses power, my generator starts automatically. When power is restored, the generator quits. I don’t need to flip switches or do anything.

If you would like to comment on this blog, or respond to the blog, there are a couple of methods. You can go to my website, www.kensblog.com Or, you can simply reply to this email. I do read everything that comes in, but much of the time I don’t respond. My apologies for that. We are on the boat and I get a lot of email. Sometimes I can’t answer it all. If you really want a response, email me directly. I’m easy to find: ken@kensblog.com