[KensBlog] The Road To Mallorca 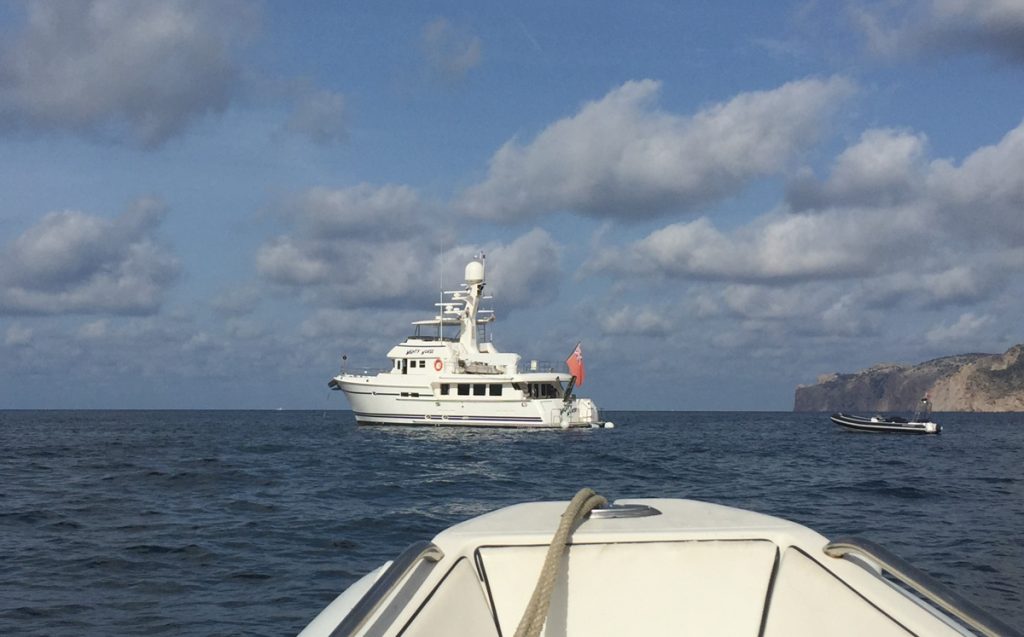 We just completed a couple of long travel days.

Day 1: Mahon Menorca (the south-east corner of the island) to the anchorage called “Cala Macarella” – Super-crowded! We couldn’t really fit into the anchorage, so we anchored at the entrance to the bay.

A beach we passed. The color of the water doesn’t come through in this picture. It was amazing!

A house with guest rooms in caves? I’m not sure. This is at the entrance (I think that’s where it was) to one of the larger anchorages on Menorca (Galdana). The bay is actually just out of sight where those sailboats are. Given that there were three boats anchored in the entrance I knew better than to try to squeeze in.

A crowded anchorage/beach at Cala Macarella. I had some work to do to crop the picture down to a PG rating.

While anchored at Macarella Menorca this boat kept zooming past us, close enough I thought he’d hit our flopper stoppers. After the second time I stood in the back with a camera, which seemed to make him really unhappy — causing him to generate even more wake. He was zooming at 20 knots through a crowded anchorage, with people swimming off the back of boats. How he misses hitting people I do not know.

Sans Souci backed to the wall at Cala Macarella, on Menorca. Great swimming! We were in only 20 feet of crystal clear water… (85 degrees!)

One of our last views of Menorca. We left early in the morning from at anchor, and during runs I monitor the tender via my ipad.

Day 2: Cala Macarella to Santa Ponsa Mallorca (near Palma). We had planned an eight hour run to Puerto Soller on the north coast. We were going to stop long enough to get a night of sleep and then head to Palma the next morning. However, on arrival there was literally no place to drop our anchor. We wandered around amidst the boats for 30 minutes, then dropped our anchor outside the bay in a location that we quickly determined wasn’t going to work.

The good news is that we always plan a “bail out” whenever we travel. So, even though we were tired, we knew we could continue another four hours towards Palma and find a place. We weren’t in the mood, but .. .it was what it was.

Cala Macarella on Menorca. One thing you get used to quickly is anchoring closer to other boats than you like. When Roberta and I anchor I set the radar such that each “ring” represents 150 feet. Normally, my rule is that I don’t want another boat within three rings when dropping the anchor. That is impossible here. These days I shoot for two rings and settle for one. In this picture I actually did get two rings, but am anchored outside the bay away from the other boats.

An anchorage I passed along the north coast of Mallorca. Beautiful, but open to swell from the north.

Most of the northern coast of Mallorca looks like this. Beautiful, majestic, barren, and TALL. I usually like to run a half-mile or more off-shore, but have noticed that sailboats always seem to like to hug the coast. I usually don’t trust the charts enough to run that close.

How about this for an anchorage? On the north coast of Mallorca.

North Coast Mallorca Note how flat the water is. Yes. We do own a Nordhavn…. Yes. It is possible of running in rough seas. But … we’ll usually wait as long as it takes for a smooth ride. We are spoiled on Sans Souci!

Anchorage on north coast of Mallorca. This looked awesome as we went by, but we knew that the wind would be coming from the north a couple days later, and we wanted somewhere where we could stay put for a few days. Otherwise… this would have been incredible! (I forget the name)

As we were running we suddenly had an alarm, and I couldn’t get the darn thing to be quiet. (It took a few minutes but I figured it out.) I have four 3.5kw inverters. One was overheating due to a failed fan. My biggest fear was that the boat was going to lose power. Even though I don’t use the inverters the power “passes through” them. I phoned Outback (makers of my inverters) who were very hel…pful. Great customer service! They offered to send a new fan and guide me through installing it. They gave me some ideas for dealing with the situation and I think I have it under control. I air conditioned the lazarette, plus turned off battery charging on that inverter. And, during the hot part of the day I swapped to the generator in the engine room, to keep heat out of the lazarette. Alll will be fine…. But .. definitely made for an interesting couple of hours figuring it out (while not in the mood and exhausted)

Approaching Ponsa, after coming through a pass which I thought would be difficult but wasn’t (Dragonera island) I heard on the Radio, “Sans Souci this is Herculaneum calling.” I looked on the AIS and it was a large (120 ‘) boat. I answered and back came, “Is Ken on board?”

Grin — I was honored. I am constantly amazed at how many people read my blog

“We’re looking for a place to anchor. What’s the best anchorage around here?,” I asked.

The answer came back, “You are going the wrong way. You need to head ten miles back to Deya.” We asked about Santa Ponsa which was where we were headed and he said it was nice, but could have swell. We thanked him and continued to Santa Ponsa. We would have turned around, but back-tracking seemed wrong… Plus, Deya was on the north coast, and the wind would be shifting to the north in a couple days. We wanted to be somewhere where we could relax for a few days, and not be forced to move.

By the same we arrived we were exhausted, but were very happy with the anchorage! We’re around the corner from Palma in a lovely bay, surrounded by restaurants and bars.

Our first hint that this might be a party town came when we went on a walk at 7am this morning.

We were along the beach when we saw a young man and two young ladies in evening dresses. They apparently had night-clubbed all night. As we were passing them, one of ladies decided to put her toe in the water (it was a mildly slanted concrete embankment going into the water at that location.) As she approached the water she stepped on green slime, and immediately went down on her tail and skidded into the water — purse and all. She seemed to think it was hilarious as she plucked her soaking wet wallet and iphone from her purse and sat them on a nearby rock. I offered to help her from the water, when the other young lady reached out for her, promptly also sliding into the water – purse and all! The young man (not that young … 30-ish) ran over to rescue the two damsels, and you guessed it.. .He also skidded down the ramp into the water. How no one was hurt, I do not know. As the man was making his failed attempt at rescue he handed his bottle of vodka to Roberta. So .. .wallets and iphones are ok to get wet, but vodka needs protected? At this point they clearly were not going to ever reach shore. So .. I VERY CAREFULLY stood on a rock and pulled them from the water.

After thanking us they wandered off down the street, in their soggy clothes, Roberta couldn’t resist shouting, “No mas Vodka!”

Sans Souci, sitting at anchor at Santa Ponsa, near Palma on Mallorca

Post Views: 478
PrevPrevious Post[KensBlog] An evening out in Mahon
Next Post[KensBlog] We’re having a SWELL time at anchor, but occasionally it’s a DRAGNext