[KensBlog] The GSSR reunites in Spain! 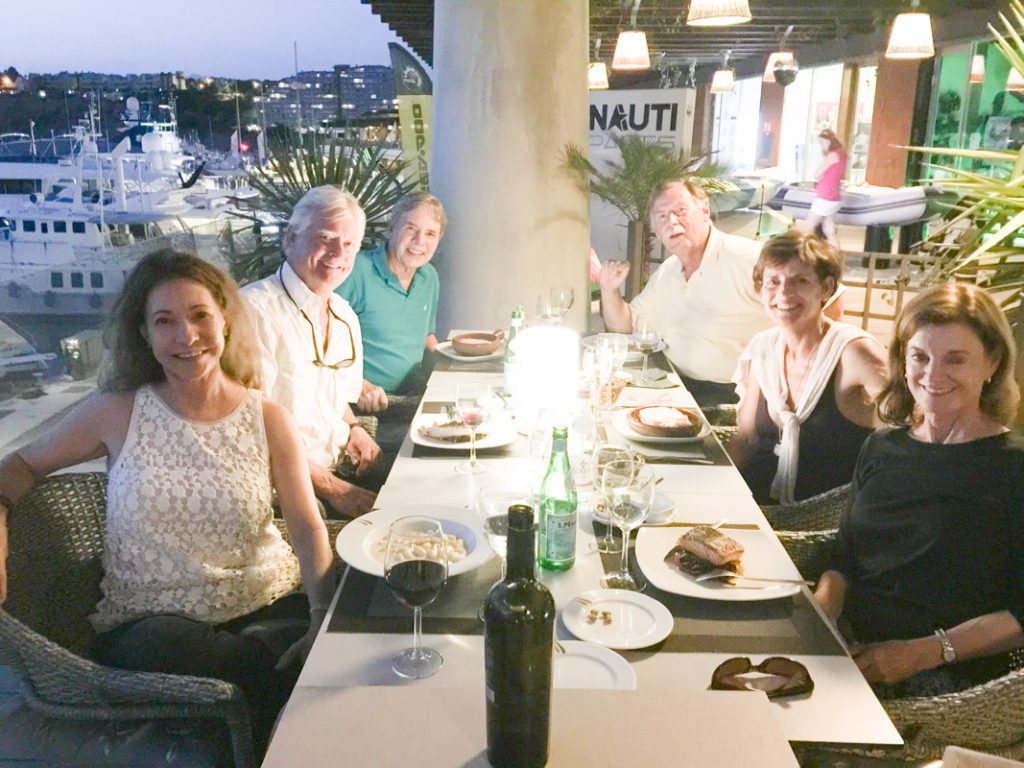 In just a few days Roberta, the dogs and myself will fly home to Seattle. For us, the season is over.

Three weeks from now Sans Souci will load onto a freighter also destined for Seattle. We’re not sure when we’ll see her next. It could be Florida, when the boat changes freighters, but our best guess is that it will be sometime next spring in Seattle. We’re hoping the boat arrives in Seattle soon enough that we can do whatever repairs we want to do prior to next summer’s Pacific Northwest cruising season. That said, there’s nothing that would stop us from cruising the moment the boat arrives.

These past few days have been a mix of emotions.

We left Seattle in May 2009 alongside two other boats; Seabird and Grey Pearl. As most of the readers of my blog know, we crossed the Bering Sea together in the adventure of a lifetime: The Great Siberian Sushi Run (GSSR.)

Roberta and I split from the group in Hong Kong, with Seabird and Grey Pearl continuing on to Thailand while we shipped Sans Souci direct to Turkey. There were a number of reasons we split from the pack, but the largest one was that our dog (Shelby) was showing signs that it might be her last year and we didn’t want to leave her home. There was no way she could have made the trip to Thailand.

We thought our group would reconvene in Turkey the following year, but then the Grey Pearl was destroyed by fire in Thailand. Seabird joined us in Turkey and we did some amazing cruising of the Eastern Med (Turkey, Greece, Montenegro, Croatia, Italy, Malta), while Braun and Tina (owners of the Grey Pearl) dealt with their insurance company and the quest for a new boat.

A replacement for Grey Pearl was found on the US east coast, a Nordhavn 64, and was renamed to “Ocean Pearl.” Braun and Tina Jones started working their way toward the Med, with a side trip north to the Baltic, and we all made plans to rendezvous in Mallorca for some cruising, after which we would ship our boats to the Caribbean. This was to be our happy reunion before we start our next big adventure.

However… Roberta and I bailed on cruising the Caribbean.

I talked about it in an earlier blog, and as these things tend to be there were a lot of factors. We hit a long stretch of bad weather around the time we were making the decision, and when we thought about spending another three or four months on the boat this winter, we just decided it would be more fun to be at our normal winter home in Cabo. We are missing our family and look forward to being closer to home for a while. Plus, this Sans Souci (our Nordhavn 68) hasn’t yet had a chance to cruise the Pacific Northwest, one of the best cruising grounds in the world.

So, when Seabird and Ocean Pearl arrived yesterday, instead of our reunion being full of planning for our next big adventure, we all knew that it is really a goodbye. We will see each other again, and it would be awesome if we could cruise together again. Our boats have each come nearly 20,000 miles since leaving Seattle. It’s been a heck of a ride, but Sans Souci is returning home, and given that both Seabird and Ocean Pearl’s owners are east-coasters, they will also be moseying towards home. We haven’t discussed it, but I suspect they also see this as a homecoming for their boats.

It is awesome having us back together, and we’ll have fun, but it is only for three days, and it’s on land. That’s the depressing part.

But enough of all the sad stuff. We’ve still got two more days of celebrating!

And… there are actually TWO reunions going on. In 2004 we crossed the Atlantic as part of a group called the NAR: Nordhavn Atlantic Rally. Alongside us were Grey Pearl and the Nordhavn 57, Goleen (plus several other boats.) Goleen’s owners (Chris and Sonaia Samuelson) are now living on Mallorca and we have a large dinner planned with the whole group tonight.

The people who cross oceans on boats are a unique breed. It takes a different kind of personality to leave the comfort of home and explore the world, crossing vast bodies of water, on a tiny boat. There have been many occasions when Roberta and I were running offshore in heavy seas, watching lightning out the window while being shaken like a ragdoll in a dog’s mouth, where we said to each other, “Remind me again. Why am I here?” The answer is because that’s who we are, and that we would be hopelessly bored without the challenge and sense of adventure. This is the common bond we share with the other cruisers we meet.

Often, we have said to each other that if Toundra and Keeley (our pups) could talk, they would almost certainly say, “Why can’t we have normal parents?” They have their own passports and although they are young, they have logged many thousands of air miles, run thousands of miles at sea, and visited over a dozen countries.

I’m not sure what our next boating adventure will be. We’re not really thinking beyond getting the boat home. We’ve been paying for a boat slip for nearly a decade at Roche Harbor (in the San Juan islands near Seattle) and the boat has never been in it! We’re looking forward to spending some time at Roche Harbor and perhaps visiting Alaska again, and then – who knows?

Roberta and I are spending today making lists of things we want to get fixed when the boat gets to Seattle. The good news is that there isn’t much to be done. The bad news is that I am confident we’ll add to the list between now and when the boat gets to Seattle. I just don’t know what those projects will be yet, but once you start thinking, “Wouldn’t it be nice if…?” I’m sure the list will grow.

Anyway… I’ll probably do one more blog entry after this one, just to wrap up the season, and when we know more about what are plans are for enhancing the boat, and cruising, I’ll do another entry.

Thank you!
Ken and Roberta Williams (and, Toundra and Keeley)
MV Sans Souci