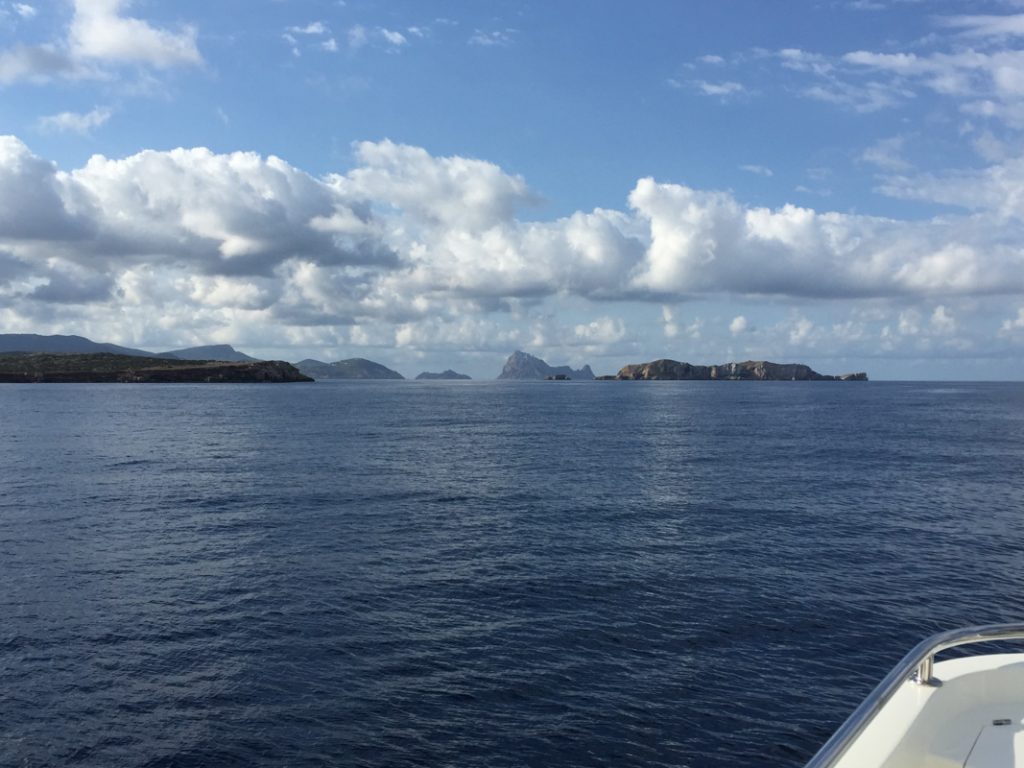 We had planned several days in San Antonio, but the weather has been dictating our schedule, and yesterday morning the weather charts were telling us that it was time to move.

This is the first we’ve ever cruised where we’ve spent more time studying swell (wave) height than wind speed. There really hasn’t been much wind, and in fact the absence of wind has been part of the problem. With no wind to keep the boat pointed a particular direction we are at the mercy of the swell turning the boat sideways, making the effect very noticeable inside the boat.

On Sans Souci we refuse to let the bad weather slow us down. In adversity there can often be opportunity.

We had read in the cruising guides that Cala Jondal (a bay on the south end of Ibiza) is so popular that finding a spot to anchor can be impossible. From Google Earth we could see that there was a huge amount of sand to drop the anchor on, and given the weather we felt confident we’d find a place.

Our plan was a success! We dropped anchor in 31 foot depth on the prettiest sand we could ever imagine. It doesn’t come through in these pictures, but when I was swimming behind the boat, and put on a mask/snorkel and looked under the water, I was blown away. I had virtually unlimited visibility and could see the bottom which consisted of what looked like carefully groomed sand stretching out in every direction.

It’s a little off the subject, and I have no pictures – but, I should mention why I was swimming. Something happened that could have been a serious problem…

After we dropped anchor I happened to be on the back deck of the boat and looked down at the tender, which was tied behind the boat. We had just towed it a little over twenty miles, and only one of the two lines that form the towing harness was attached. The other was missing. The line that was still attached was shredded. It looked like a big ball of cotton candy! As did the last couple of feet of the thicker tow line connecting the tender to the boat.

The towing harness was as good as it gets, and I’ve towed the tender over one thousand miles on it. I see it every day and had no indication it was falling apart.

I am now certain I know what happened. There were thimbles (metal sleeves) inside loops at the end of all the lines. One of the thimbles broke free, probably bent from frequent use, and acted like a sharp metal edge, like a razor blade, to destroy the lines. I spent over a half hour in the water with lines, shackles, wire ties, etc trying to piece together a towing harness that would be good enough for short trips on calm water. The days of being able to tow in virtually any sea conditions are over until I can have a new towing harness made.


Following is a video which you MUST watch. It shows how much fun can be had on a gloomy afternoon.

Some of you may have wondered with all the bad weather if we’ve been having fun. I suspect this video will clarify that topic in your minds.

At the end of the video you’ll see an interesting looking dock. The swell is too rough for an ordinary dock, so I assumed we’d be stuck on the boat. However, we noticed a tender going back and forth to the boats so I suspected he was a water taxi, but to get his attention I had to chase him down with our tender. (Later I discovered that he monitors channel 77 on the VHF.)  To get us to shore, instead of a normal dock, he has a wood cradle. As he approaches the dock he sticks his nose into a V formed by vertical posts, and this keeps the tender stable long enough for guests to get on or off.

That’s it for today!
Ken and Roberta Williams (and, Keeley and Toundra)
Nordhavn 68, Sans Souci