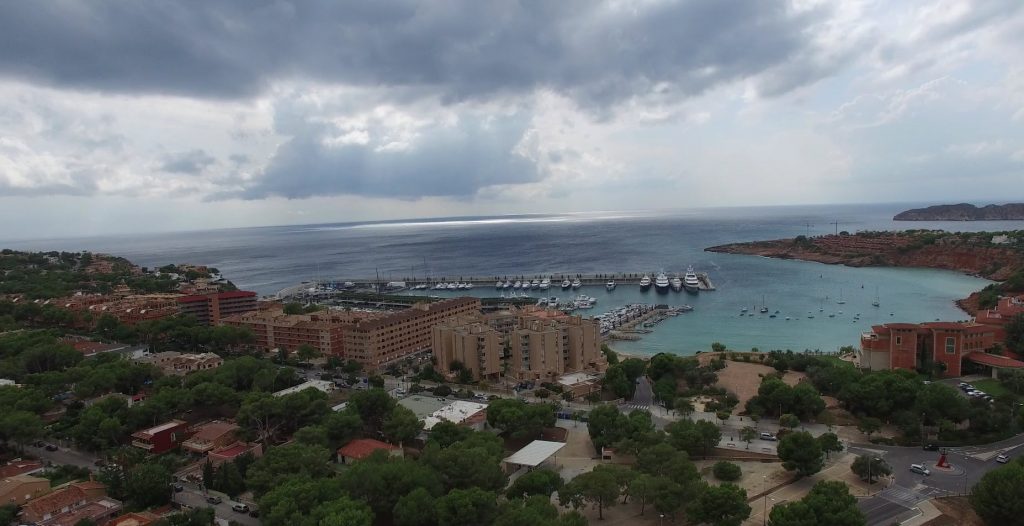 I am working on a final blog entry that will wrap-up and summarize our season. I should post that in the next few days.

In the meantime, here is a brief video I shot with my drone on our last day at Port Adriano. It doesn’t have much to do with boating, other than it begins by showing a bit of the squall that hit us while sitting in port.

The morning started fine and looked to be a nice day, but as I was sitting at my computer early in the morning I noticed the captain and stewardess (yes – they still call them that on yachts) from the next boat sitting on the front deck taking pictures. It made me curious what they were looking at so I went out to the bow and looked westward where their cameras were pointing.

There were dark storm clouds; some of the darkest I’ve seen and they were coming our way fast.

Within minutes the wind shot up to 20 knots, from nothing. Minutes later it hit 32 knots and we were besieged by rain. Pushed by the wind, the rain was coming sideways! I wanted to go outside to check our lines but I’d have been drenched in seconds.

And, then the lightning struck. It didn’t seem that bad, but it seemed incredibly close. Some of the strikes were really frightening the dogs.

As part of preparing for our departure, and in addition to all the packing, Roberta needed to do some final loads of laundry. As always, she called up the stairs to say, “Is it ok to start the dryer?” We were on shore power with all the power we could want, but it’s a rule on Sans Souci to alert me before starting any heavy appliances. I responded, “No problem” thinking that would be the end of it, but back came the reply, “Do you have the breaker off?”

Crap. I knew what this meant. The shorepower had gone out. I phoned Steven Argosy (Nordhavn 62, Seabird) to ask if his shorepower was out. It wasn’t. This meant it might just be our boat, so I headed down to the engine room.

We have an international shorepower converter called the Atlas. It allows our American boat to accept the 3-phase European power. I immediately noticed the bright red error light. On the LED was the message, “Voltage out of range.” That meant we had gotten some voltage surge due to the lightning and the Atlas had decided to shut down. I pressed reset and the error wouldn’t go away. “Why was this happening on our last day?,” I was thinking. I shut down the breaker right where the shorepower first enters the boat, powering down the Atlas completely. I waited a minute and powered it back up. It seemed to be coming up. Good! But, then it suddenly went black. Not good.

I checked the shorepower breaker. It was tripped. Double-crap. Normally this is an indication that the boat is drawing more amps than shorepower could provide. There was nothing running on the boat that required a significant amount of electricity. I flipped the breaker back on and started the power again. Seconds later, the power shut down again, but this time the breaker wasn’t tripped. It appeared I had blown the shorepower breaker.

We were connected to a 150 amp shorepower circuit. Tripping it should have been impossible. Something was definitely wrong. I decided that I should take a look at the power pedestal, and despite the driving rain went ashore to inspect it. Unfortunately, there were no breakers on it I could get at, and no indication of any sort as to whether the power was on or off.

I went up to the pilot house and called the marina, asking them to come reset the power pedestal. They, having common sense, said they wanted to wait for a break in the action and then send someone to check on our power. I knew this could take a while, so I used the time to type a note to the local gentleman (Richard) who I would be paying to look after our boat during the weeks until my guy Jeff, could fly over from Seattle to Mallorca to load Sans Souci onto a freighter.

The storm today seems to have blown up Sans Souci’s shore power converter (the Atlas).

Richard – is there a time you could stop by today? (what time works for you?)

My plan is to:

I waited to hit send hoping for a miracle when the marina guy looked at the power pedestal. After about 30 minutes, there was a break in the rain, and someone did show up. I saw him look at the pedestal, open it, fiddle around, and then walk off. I walked out to the back deck to see what he’d found but he was already walking away. So, I went to my electric panel and seeing a green light shouted to Roberta, “The electricity is on! Yay!” The email above was never sent.

Anyway, this video shows just a brief bit of the rain. Steven (from Seabird) and I had made plans to fly our drones on the last day. However the rain was making it impossible. Plus, we were worried the marina would yell at us for taking up a drone in the marina. I called Steven to say, “It has stopped raining for a few minutes. Still want to fly? We can go up the hill to a playground I saw.” Steven said he didn’t want to take his drone out in the rain and I said I’d take a chance with mine.

As you’ll see in the video we did take the drone up, but the wind came back, and it started raining. The video is amazingly clear given that the drone was shaking trying to stabilize itself despite the wind. Had it been a clear day we’d have flown it over to the marina but I was too afraid of losing it. The rain was obscuring visibility and we shouldn’t have been playing at all .. but, what fun would that be? No guts, no glory. Plus, you know that old saying, “The primary difference between men and boys is the cost of their toys.” The best piece of the video is the part that unfortunately we lost. I was showing Steven how fast the drone could go and meant to stop it just before running into a fence, but … didn’t. Oops. The fence was fine and the drone was fine, but … it was a spectacular crash, and I wish the video hadn’t been lost. Anyway… this has very little to do with boating, but I think you’ll like it.

Click the link below in order to see the video. Don’t forget to click the little icon in the lower right corner of the video that makes it display full-screen.


Thank you!
Ken and Roberta Williams (with Keeley and Toundra)
Nordhavn 68, Sans Souci