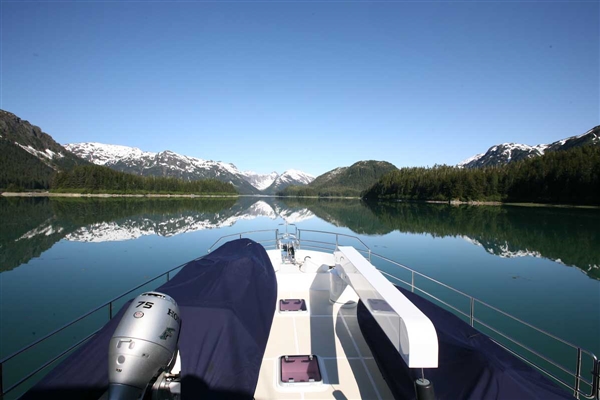 Roberta and I are back on the boat. We had to leave the boat for a month to take care of some business, but are now ready to start the summer cruising. Sadly, it will be a short year due to our late start.

And, even worse, I’m not expecting the blog to be particularly interesting this year. Roberta even asked, “Why are you going to write a blog? We’re not doing anything exciting.” She is right about that. My guess is that we won’t be going very far; perhaps no more than a hundred miles north of where we’re sitting now.

That said, we are planning to have FUN!

Yesterday while walking the docks I spoke briefly with another Nordhavn owner. We were talking about cruising plans and I mentioned that we’d be planning to transport Sans Souci to the east coast at the end of the season, and asked if he’d ever consider cruising another part of the world.

He didn’t have to think before responding, “Why would you ever leave the Pacific NW? This is the best cruising in the world!”

Having cruised over 25 countries I can confirm what he said. You could cruise between here and Alaska for a lifetime and not be bored. And in fact, that’s exactly what most of the boaters around me do. There are many reasons for this: Clean water, protected waters, sunshine in summer, sheltered bays to drop the anchor, welcoming marinas, wildlife, fishing, and all the natural beauty you could ever want.

I’m not sure I can explain why we ever left the Pacific NW or why we’re contemplating leaving it again. Cruising internationally is expensive and in many ways not very practical. Anyone who has been following my blog for years knows some of the challenges we’ve faced. Weather, wind, swell, lack of good anchorages, cultural problems, language problems, immigration problems, Med Mooring challenges, etc. The list is of infinite length.

Perhaps a psychologist could answer the question better than I, but I’ll take a quick stab at it.

I like warm water cruising. Summers in the northwest aren’t bad, but the water never really warms up. We found one bay last year where the water did get into the 70s, but generally speaking swimming is out of the question. And, I confess that I liked it in the Med. Whenever I’m on the boat I constantly am thinking about wanting to get the boat back to Europe. In particular, I’d like to get the boat back to Montenegro, a small country from where Croatia, Malta, Italy and Greece are easily reached for summer cruising.

As for Roberta, she loves adventure. She grew up wanting to be an archeologist. Being able to drop the anchor in places like Turkey fascinates her. And, whereas I’m focused on getting the boat to southern Europe, she dreams about taking the boat to Ireland and Northern Europe.

Our current plan, which is “written in sand at low tide”, is to mosey over the next few years back to Europe. Exactly how we’ll get there, or when, we don’t know. I’m in touch with a group of other Nordhavn owners with similar cruising plans, in hopes we can put together a group to cross the Atlantic together.

Our first step will be to transport the boat to the east coast later this year and then cruise the east coast next summer. Where we’ll finish next summer, or exactly where we’ll cruise, we do not know. Anything is possible. And, that’s the great thing about boating!

With that preamble… Let’s talk about July 4th

We’re currently at our “home marina”, Roche Harbor, on San Juan Island, about 80 miles north of Seattle. We have a long history with this marina.

Back in my working days (over 20 years ago) we used to “fly up” on Fridays hang out on the boat, and fly back to reality on Monday mornings. On three day weekends we’d take the boat a few miles away for some anchoring. Lots of the boats in this marina are used as weekend retreats.

Regular visitors to Roche Harbor will enjoy the video above and will notice something unusual. Kenmore Air always lands in the bay in front of the marina. From time to time I’ll wonder how they can find a spot given all the boats in the bay. But, this time, the pilot didn’t even try. He just bypassed the bay and landed in the entrance channel. We had a bit of a bounce on the way in as we crossed a wake but were standing on the dock in front of our boat within 45 minutes of departing Seattle.

Roche is an incredible marina. In fact, it is much more than a marina. Here are just a few of the hundreds of things that make it special:
The video above shows just one of the many activities on the docks for July 4th. Everyone, on virtually every boat, had their barbecue going. In the evening there was one of the best fireworks shows I’ve ever seen, and we had a front row seat from the back deck of Sans Souci.

And, a couple of things for those of you interested in technical stuff

Recently I gave a presentation at a Nordhavn event on “communications in far a way places” talking about the various ways of getting internet while on a boat. (Click here) to see the slides I used. Taken out of context they may not make sense.

I hope all of you also had a great 4th of July!