[KensBlog] High highs and low lows, all on the same day 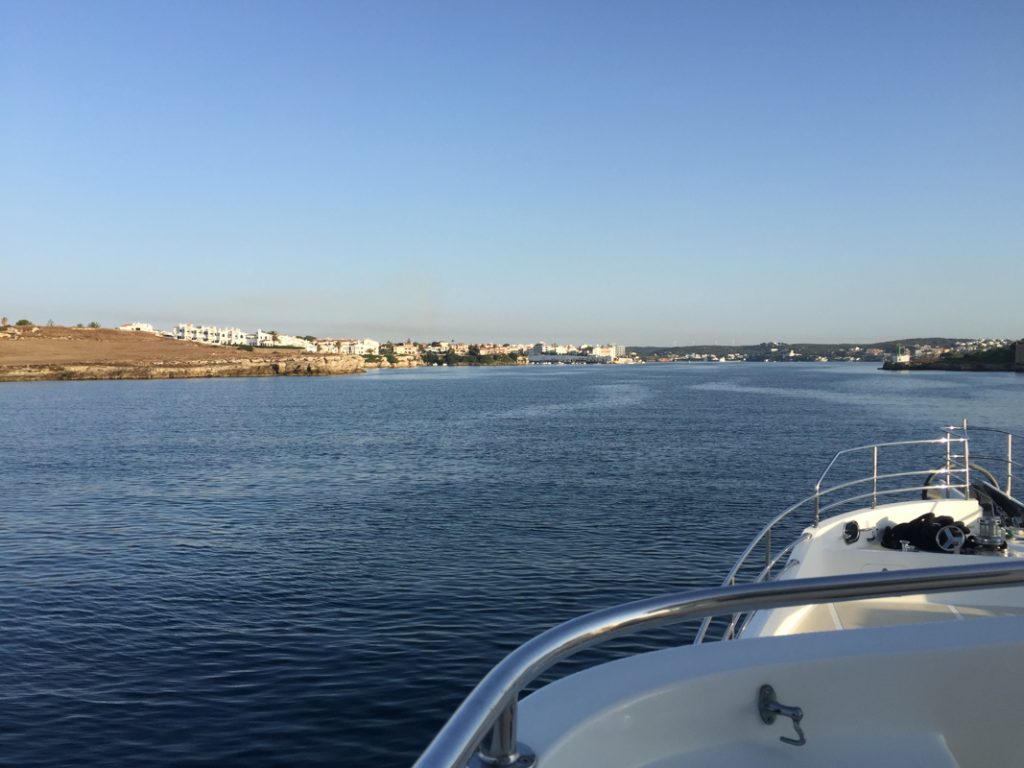 The last 12 hours have been some of the craziest ever, even by Sans Souci standards.

Yesterday started wonderfully. We were very lazy. We swam, had dinner on the boat, and really didn’t do anything. We knew that today we’d be dropping anchor in front of a city and it was our last day at anchor in a pretty bay for a while.

At 1:30am we were both woken by the boat rocking violently side to side. We assumed it was a wake and didn’t think anything of it. Minutes later we took another roll, and then another, and then another. These were substantial enough that Roberta asked me, “Can rolling tip over the boat?” I said, “No.” but… wondered. We weren’t rolling anywhere near enough to tip the boat, but we were rolling enough that it was hard to stay on the bed.

Our plan was to re-anchor in the town of Mahon this morning. Thus, we hadn’t put out the flopper stoppers (big plates that dangle in the water to help us avoid rolling.) It was dead calm yesterday so we saw no need. Deploying them in the middle of the night would be difficult.

We thought maybe the rolling would stop but it stayed bad. We went up on deck to see what was happening and every boat in the anchorage had the same problem. Most were sailboats and I couldn’t imagine what it must be like inside of them. I couldn’t understand why the swell, and looking at the water I wasn’t seeing waves. All looked fine — but, we were rocking. “Current?” I asked Roberta.

Sleep was impossible and we were worried things would start falling and breaking. We started the engine and maneuvered the boat, while anchored, such that the nose was into the swell. It was calm, but we couldn’t hold the boat in that position all night.

Ultimately, we decided just to tough it out and went back to bed, where we held on (literally) until daylight.

At daybreak we were still rocking. A few other boats had pulled anchor. We headed for Mahon, a short 90 minute cruise away.


Mahon is a deep skinny channel. It cuts into Menorca almost like a long fjord that stretches for three miles. The sides are lined with beautiful condos and homes, with boats everywhere.


The charts are very explicit that boats are to anchor in only three places. We crawled into the channel moving at the prescribed 3 knots, looking forward to dropping anchor and going back to sleep. I had phoned ahead to see if moorage was available, and none was possible.


When we arrived at the anchorages, each was filled with floating pontoons, with boats parked on them. I didn’t see one boat at anchor.

Roberta felt we should just drop anchor. The cruising guide said these were anchorages, but obviously anchoring had been outlawed, and the anchorages replaced with these floating pontoons (at least for the high season.) The space was taken by floating pontoons. We had no idea what to do. As you can imagine, we were without sleep and not in the mood to be floating with no place to go.

I phoned one of the anchorages I had spoken with earlier, and they found us space — a side-tie! And, with a strange coincidence, it happened to be right next to where we were floating. I had seen it but thought it was just some sort of breakwater. It didn’t occur to me I could tie to it.

Our luck was improving!


The marina sent a guy on a tender, who helped tie up lines. We were on a long narrow floating pontoon, alone. Just us and some birds. Roberta and I went to sleep. This was at 10am.

At noon, I woke and decided to take the tender to go see if I could find a place to buy internet in town. Moving at only 3 knots, by the time I reached town every place was closed. I grabbed a few bites of pizza and headed back to Sans Souci.


As I was heading towards Sans Souci, about a mile away, I was passed by a tender with a couple of marina guys speeding towards the pontoon we were floating on. I figured they were just meeting someone else who would also be tied to the pontoon.

But, when they got to the pontoon I could see they were knocking on the side of Sans Souci. I kicked it into gear and reached the dock about 10 minutes after them. As I came close the problem was immediately apparent.

The dock had moved and was now within perhaps 75′ of being on shore! The wind had come up (only 15 kts — not a big wind). Sans Souci is a heavy boat (120 tons.) The wind pushed Sans Souci, and it pushed the dock, which broke anchor, and the whole mess was going to soon be on land! Complete with Roberta, and the dogs! … and they might still be sleeping!


Meanwhile, the guys woke up Roberta. They explained a diver was coming in 30 minutes to fix the pontoon. I didn’t think we had that long. They left and I could see we were clearly moving towards shore.

I hurriedly untied Sans Souci and jumped aboard. We were floating again, with no place to go.

But… we got some sleep, and I at least had some lunch.

I phoned the marina, who were very apologetic and said they would send some people to help me Med Tie (tie my stern to) another dock.

True to their word, a group of Marineros (their word for the boat guys) arrived in tenders and we tied up the boat to another floating pontoon.

PS We are now safe and secure, as far as we know, and expect to be here for the next five days.