[KensBlog] End of the Road 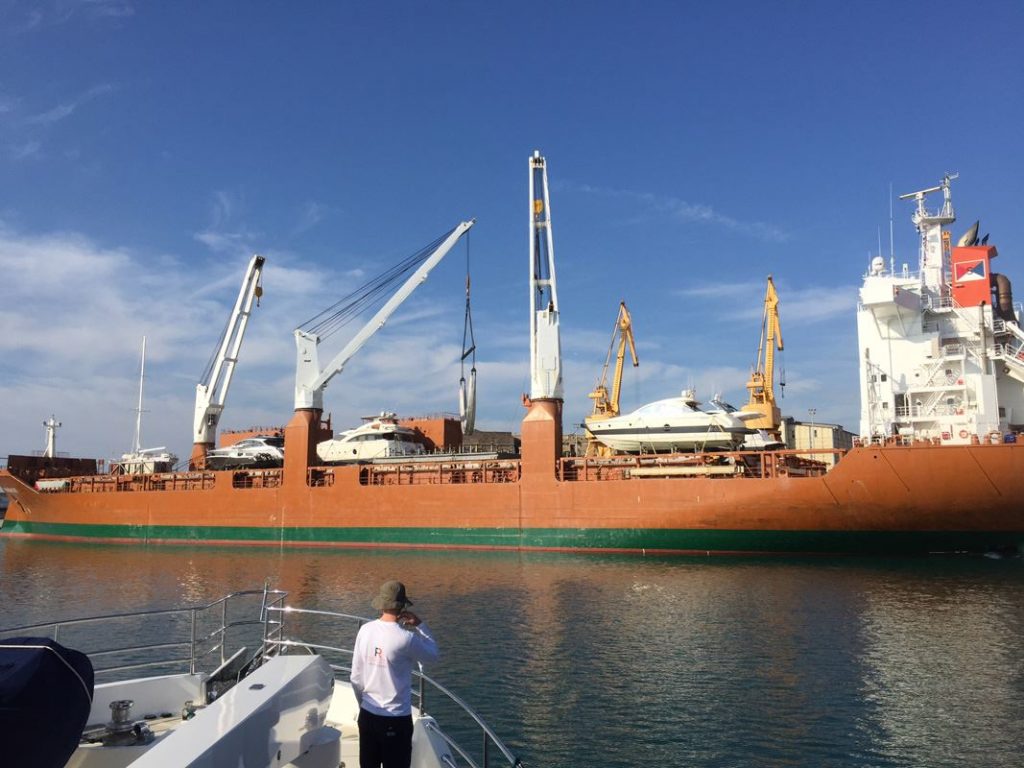 It’s the end of a very long road.

It was the trip of a lifetime.

We met incredible people, cruised places off the beaten path, experienced a wide variety of cultures, witnessed history being made and history long past, and learned more about the world and boating than we’d ever imagined.

As mentioned in prior blog entries, this year, Roberta and I decided to ship the boat home to Seattle aboard a freighter. We flew to Seattle with the dogs a couple of weeks ago, and sent the Seattle-based mechanic/Captain (Jeff Sanson), who maintains our boat, over to Mallorca, Spain, to prepare Sans Souci and load her onto a freighter.

Loading the boat onto a freighter isn’t as easy as it sounds. Roberta, Jeff and I each made lists of things to do before the boat would be loaded onto the freighter.

Here’s a small sampling of the items on Jeff’s list:

1. Call customs guy and pay
2. Pickup euros
3. Throw away dog stuff
4. Clean out freezers and refers setup for shipping.
5. Clean out holding tank
6. Stash all outside cushions
7. Roll up fly bridge Bimini top
8. Tie down all chairs in salon
9. Make sure all cabinet locks are pushed in before leaving boat
10. Store table chairs in side of vessel from top deck
11. Make sure tenders are tied down properly
12. Put fresh baking soda in refers and freezer’s after shutdown
13. Remove all items off counters and store
14. Run Water makers
15. Clean out shower sump with bleach
16. Bleach Gray water tank and pump down
17. Pump down fresh water tank
18. Pump down black water tank
19. Move boat to Palma prior to loading 9/29/15
20. Have diver clean bottom and replace zincs
21. Secure engine room & Lazerette
22. Go through the order of shutting down systems.
23. Last thing is to store dock lines and fenders and once the boat is loaded on the ship.
And more!


Jeff flew to Mallorca thinking he’d have a few days to prepare before the freighter would arrive, and that after its arrival there would be a few days delay. Both he and I were surprised when just a day after his arrival he received this message from the customs agent in Mallorca:

The plan is to load you tomorrow at 8 am.


We shouldn’t have been surprised. I shipped once before with the same yacht transport company, and they were excellent to deal with (Sevenstars.)

Jeff still had a few tasks to complete, but got them all done. The last of the tasks was to get the bottom cleaned. Amazingly, he (and Richard, a local guy I had hired to watch over the boat) persuaded a diver to go under the boat, in driving rain and lightning, to clean the boat.

Loading a boat onto a freighter can be disastrous. I know of two Nordhavns that were destroyed while being lifted, and have had some dicey liftings of my own boat. In addition to those times where the lift seemed barely able to lift the boat, I had a real mess in Costa Rica when I was shipping the boat home to Seattle. The freighter appeared and the Captain took one look at my boat, declared it too heavy, and refused to attempt lifting it. That mess took years to sort out and ultimately resulted in a miserable run up the coast in horrible conditions.

Adding to my sense of nervousness was that our boat was nearing the end of the 18 month period we were allowed to be in Europe without being assessed a huge import tax (VAT). We had been watching the calendar closely and I had carefully preserved the paperwork showing we were in the country legally and had not overstayed our dates, but… should anything go wrong, and some major delay creep in, or some tax authority declare my paperwork insufficient, it could be a nightmare. I had everything well organized, and knew there was nothing to worry about, but… having nothing to worry about has never hindered my worrying.

Thus, the hours before loading were tense. And, with the time zone difference, the action in Spain would be happening while I would be Sleepless in Seattle.

At 11pm I spoke with Jeff Sanson. Sans Souci was to be loaded on the freighter at 8:30am Spain-time (11:30pm Seattle-time.) Jeff was busy doing the final preparations to load the boat and was waiting for a call from the freighter’s load-master to start the loading. I told Jeff I was going to sleep and he should just text me when the boat was loaded onto the freighter.

At 2:30am the phone rang. I expected it to be Jeff, and that I was about to hear that something had gone wrong. I jumped to answer the phone, fearing the worst, but it was a lady’s voice with a thick Spanish accent. She was from the Port Adriano Marina, where Sans Souci had been moored awaiting departure for the U.S. They had noticed that my boat was gone and wondered if it were coming back. I was half-asleep and did a poor job explaining that the boat was loading onto a freighter. I confused her, leading her to seek her boss, who I further confused. But, the message finally got through, and she said they would email me an invoice.

I had no word from Jeff, so I checked my email and there was a picture of Sans Souci in the slings! The email had just arrived moments before. We were loading! I didn’t want to pester Jeff, so I decided to go back to sleep.

Sleep was impossible. After a bit of tossing and turning I phoned Jeff. No answer. I figured he was busy and tried to sleep again.

At 3:45am, the phone rang. It was Jeff, “Did you call me?” he asked. He went on to say that the boat was still in the water. “But, I saw a picture of it lifted from the water!” I exclaimed. He explained that they had lifted the boat, but then noticed it was coming up at a strange angle, and lowered it back to the water to readjust the straps. Divers were under the boat as we spoke. I was nervous but said, “I’m going back to sleep. Call me if there are problems.”

At 5:45am, after hours of tossing and turning, I texted Jeff to ask how it was going. He texted back a picture of Sans Souci on the deck of the freighter! All was good. Jeff said that all had gone smoothly on the second lifting, and that he had met the captain of the freighter.

The captain gave Jeff, as well as the other two guys with Jeff (Richard, a local person I hired to watch over the boat in my absence, and Steven Argosy, from Seabird) a tour of the freighter, which is loaded with boats bound for the Fort Lauderdale boat show in Florida.

Jeff and I briefly discussed next steps. The freighter will cross the Atlantic in just 11 days.

Things are happening faster than planned. Jeff will return to Seattle and then almost immediately fly to Florida.

Sans Souci was loaded Spain, but will offload in Florida. Jeff will need to put the boat in a marina for some indeterminate amount of time. Then, return home, and fly back again to load the boat onto another freighter where it will probably offload in Canada. After which Jeff will bring it back to Seattle.

I’ve received a lot of email asking, “What went wrong?” As many of you know, our original plan was to spend almost eight months on the boat this year, including a trip to the Caribbean this coming winter. Instead we spent around four months on the boat and made the decision to ship the boat home, bypassing some great cruising in the Caribbean and the entire east coast of the United States.

There were lots of reasons but it really comes down to: It sounded more fun to be at our home in Cabo San Lucas, Mexico, this winter than to be on the boat. We were missing our family and friends in Seattle, and wanted some time at home there, and we thought about how much we missed our life and friends in Cabo, and decided we would rather be there as well. We were also looking forward to cruising with our GSSR co-conspirators in the Caribbean, but… a tough decision had to be made, and we were homesick.

We did have some issues with weather this year (too much wind, and too much swell accompanied by unprotected overly-crowded anchorages) but I don’t think that better weather would have made a difference. It really just came down to, “We love the boat, but we love it for four months a year, not eight months a year.”

We thought about shipping the boat to the east coast, and then cruising there next summer, and came close to doing that. But, we just decided that Sans Souci needed some attention. We’ve run the boat over 30,000 miles and it is time to make her new again. There’s nothing major, but the upholstery is starting to wear, the carpets are looking worn, there are some fiberglass dings, there are some wood dings, etc. We’re looking forward to having the boat at home, and getting her looking perfect again. Also, we have had a slip for nearly a decade at one of our favorite marinas in the world, Roche Harbor, and Sans Souci has never even been in her own slip. We are looking forward to spending some time in the Pacific NW, which is one of the greatest cruising grounds in the world.

So, as we look ahead, and think about “what comes next” the answer is a firm, “Darned if we know.” We haven’t the foggiest idea of what comes next for Sans Souci. We know that she’ll get fixed up, and we know we’ll spend some time next summer in Seattle. But, after that? Who knows? There is some momentum for taking her to Hawaii, and we’re going there soon to check out that option. But.. we don’t know.

Anyway, I thought I’d close out the year with a quick look back at some pictures that aren’t particularly the best pictures or most interesting pictures, but they are ones that reminded me of the good times we had.

That’s it for KensBlog for 2015. Thank you for accompanying Roberta, Keeley, Toundra and I on this amazing journey!