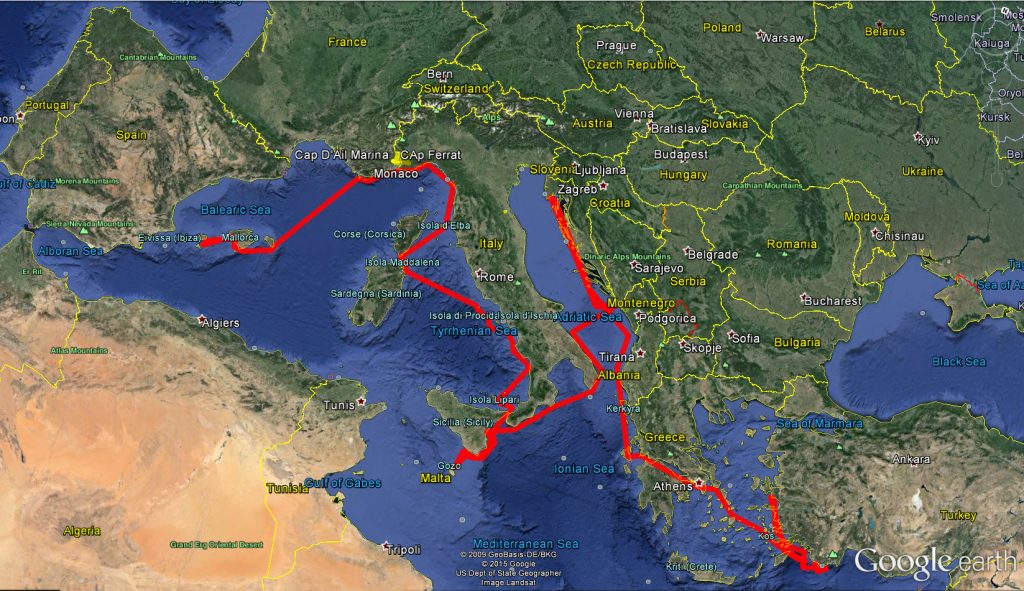 Roberta and I have come to a big decision.

We have five weeks left cruising in the Med, and then we will be shipping the boat home to Seattle.

A week ago we thought we’d be cruising the Caribbean this winter. We made plans with the other two boats from the GSSR (Bering Sea) expedition to cruise together and were looking forward to it. We were also talking to a larger group of Nordhavn owners about the possibility of exploring Cuba.

All that changed when at dinner a couple nights ago I mentioned to Roberta that I had been thinking about if we should cancel the Caribbean and just send the boat home to Seattle. I was surprised when she said, “I’ve been thinking the same thing.”

There isn’t really any one reason why. There are a wide variety of personal issues. Probably the biggest one is simply that it fits our lives better to cruise four months a year than to cruise more than that. We had planned to be on the boat nearly eight months this year, and as that vision has gotten closer to becoming reality we just kind of said, “Nah. Let’s go home after this season ends.”

We’re not sure what happens after the boat gets to Seattle. Over the past eight years we have put approximately 20,000 miles of cruising on this boat. We’re looking forward to being able to make the boat new again. We’ve been able to keep it mechanically in perfect condition, but it needs things like carpeting, reupholstering, various nicks taken out, things that are hard to get done while traveling in a foreign country. After that, we’ve discussed taking the boat to the South Pacific, and we’ve discussed returning to Alaska. We really have no idea. As I said, a week ago our plans were completely different. Thinking ahead to next summer seems a lifetime from now.

This year is not over!

We still have five weeks of cruising, which includes the islands of Mallorca, Ibiza and Formentera. We also have a reunion to look forward to as our three GSSR boats reunite somewhere here in the Balearic Islands of Spain. It will now be a bit of a sad reunion in that instead of it being the beginning of a new adventure, it will mark the last time we cruise together for the foreseeable future.

Anyway… we still have a lot of cruising here in the Med to do, and I’m anxious to get started. We’re still sitting in Mahon, on the island of Menorca. It’s a spectacular place with great restaurants and plenty to do — but, I’d rather be at anchor. Unfortunately, the winds have picked up and we need to let the weather calm before we can leave. My guess is that we are stuck here at least another day or two (or, three.)

I am including a picture which shows our approximate route through the Med (approx. 5,000 miles.) We have had some incredible and unforgettable experiences. As I look at the picture all the memories return. Anchoring on a volcano off Italy. The luxury of Montenegro. Our favorite anchoring ever, in Turkey. Anchoring in a crater in Malta. The thousand islands of Croatia. The list goes forever. I wouldn’t say the Med has been easy cruising. But, I was serious when I asked Roberta if we’d consider buying a slip in Montenegro and using it as a base to explore each summer (she thought about it, but passed.)

Anyway… as I said .. this season isn’t over. But… this does represent a significant change in plans, and makes it even more important that we have LOTS of fun over the next few weeks.