[KensBlog] At rest stabilization? An email from a blog reader 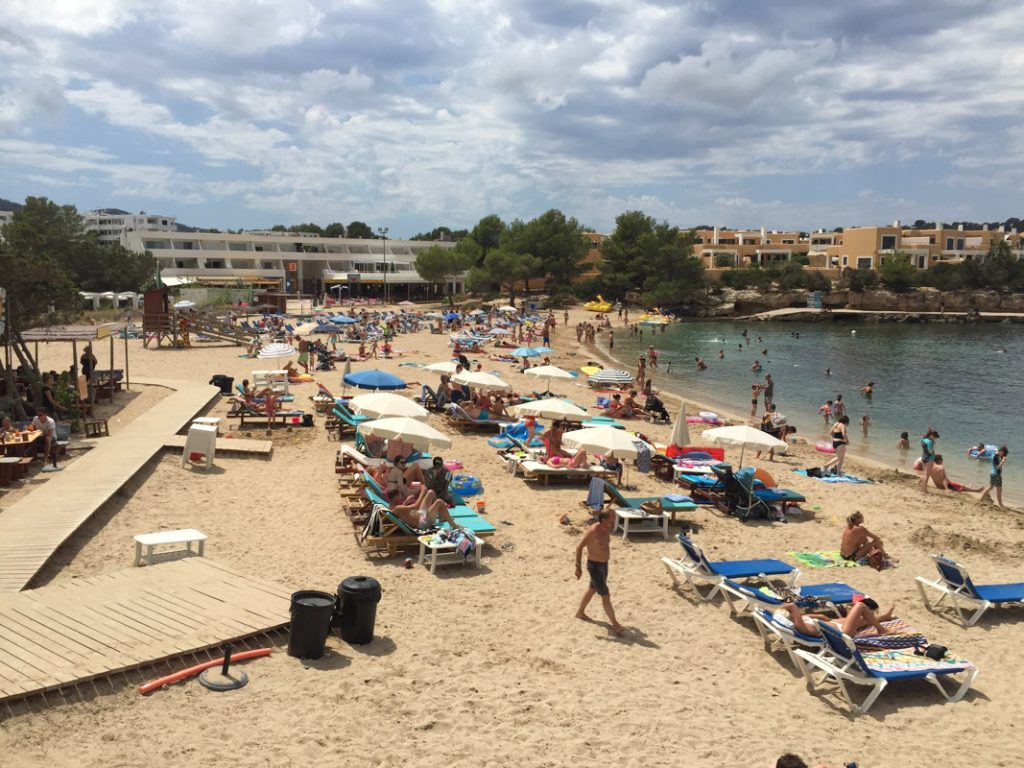 Sans Souci is now anchored at Es Torrent Ibiza, about two miles out of San Antonio. We had been warned that the anchoring at San Antonio would be noisy and crowded with poor holding. Instead we looked on Google Earth to find a place with lots of sand that would be close enough for a quick tender ride.


Es Torrent has turned out to be a great choice. We tendered in for a very nice dinner last night. It is sometimes a challenge to find a place to put a tender, but we found a place that rented water toys that had a dock, and they were amazing. They helped us tie up the tender and even moved it to a better location when they closed for the night.

The beach had a number of choices for restaurants, including a very popular one that had loud “Ibiza music” going, and offered Mojitos and massages with nightly fire performances.


Passing ferries occasionally generated a bit of wake, but the prize for most wake generated goes to this jet boat that looked like a lot of fun:

And, on a much different topic…

I received an email from a reader of my blog that was very interesting, so I thought I’d pass it along. Hopefully the author won’t mind (I removed some personal bits).

Ken, we have met twice – most recently my interrupting you during breakfast in Reykjavik. I’d like to share something with you.

Context: We’ve borrowed/chartered Nordhavns in the PNW. We own an offshore Viking Sportfish based in […]. We use it to cruise the northeast at different times in the summer. Not a Norhavn experience, but it’s what we’ve got.

[…]. Sportfish boats are fast and love to rock and roll.

My wife likes stability. […] We were looking at a new Viking two years ago and sea-trialed a new 62EB with a Seakeeper. Wendi was sold. I called it the ‘wifekeeper’.

Last summer after 2 weeks in the PNW she said ‘let’s build a new N60’. You had an email from me re that idea. Thanks for your thoughts. I’m leaning towards a slightly used N60 or N64.

In the interim I decided to put a Seakeeper 9 in the 2001. I did it for two reasons:
1. it would help my resale, and
2. it would provide a few weeks of smooth(er) cruising in the New England waters (and the 15 offshore trips to the Canyons).


We’ve put over 150 hours on the boat since installation/trial.

I’ll never have another boat without one. She just becomes part of the start sequence and doesn’t get shut off until the shutdown sequence. This could be 24 hours of running: flawless, zipless and effortless.

It’s so simple and reliable that we forget that we have it. We are now fishing longer days and I am less tired and fatigued. In short the “little orb of safety, surety and smoothness” is awesome. All parts are integral and the only addition was one through-hull with a water pump. No external moving bits, hydraulics or noise. Low power usage.

Nothing to set up or attach, nor to pin if it [fails]

I’ve been told that the next N63 that gets delivered will have two
Seakeeper 9’s. […]

When I read your article about rock ‘n’ roll I thought I would step in and share what we have found. For our trip starting next week I would expect the Seakeeper to be working 24xseven (like the generator). At anchor or tied to a pier.

Thanks for sharing, this is what little I have to offer in reply.

Interesting! My sense is that these aren’t practical for my boat. They are something that really needs to be designed in from the beginning. That said, I’ll at least ask the question when I get the boat back to Seattle.

And … I don’t want to over-focus on this issue. Although this particular part of the world, with this particular weather, generates a lot of swell. That has not been our experience over the years. Most seasons we never even put our flopper stoppers out. It might be that the Seakeeper device makes sense on lighter fishing boats but not on a heavy Nordhavn. Or .. .maybe they are practical?

That’s it for today.

Thank you!
Ken and Roberta Williams (and, Keeley and Toundra)
Nordhavn 68, Sans Souci