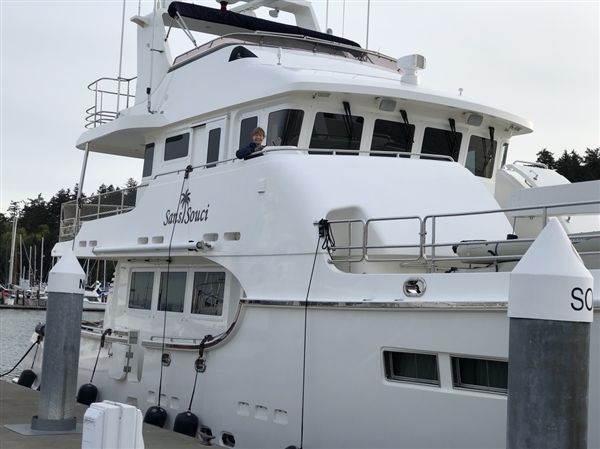 Roberta and I are on the boat! A new season has begun!!!

That said we just finished today’s run, and it wasn’t much of a run. We only moved the boat about thirty-six miles from Anacortes, where the mechanics had been working on the boat, to its slip at Roche Harbor in the San Juan Islands.

Not to say it wasn’t an exciting run. There are a few sayings that describe the pleasures of owning a boat, one of which is that, “Boating can be described as long periods of boredom punctuated by seconds of terror”. We had a few seconds that fit into the latter category today.

I’ll get to what happened later in this blog entry.

First, I need to mention our son DJ’s blog, http://pcthiker.talkspot.com. DJ is not into boats, but I am confident you’ll find his blog quite interesting. DJ is hiking the Pacific Crest Trail from Mexico all the way to Canada (almost 3,000 miles)! He has been at it for three weeks and is a much better writer than his dad. One thing that makes his blog interesting is that DJ started the hike with two strikes against him:
I don’t know if DJ will make it to Canada or not. He is very stubborn, so it isn’t impossible. That said, he fell a couple days ago and is nursing a bad knee, so we shall see.

The first run of the season is always a bit more exciting than others. When Roberta and I leave the boat at the end of a season we pretty much forget about the boat. We’re only on the boat about four months a year, which means that for eight months the boat is sitting in a slip, or with the mechanics.

Boats like to be run. Leaving a boat sitting for an extended period is tough on the boat. I can’t really explain why, but the more you run a boat the more reliable it becomes. Let it sit for eight months and you should expect surprises.

There’s also the issue of “me”. When I’m away from the boat for eight months I forget some of the nuances of running the boat. It’s not like riding a bicycle or driving a car. There are a lot of steps and a lot of complexity. I am a far better captain at the end of any given season than at the start.

So… we got off to a good start. As you can see in the pictures and videos. The sky was gray, but the seas were calm. I had worried about departing the marina, because there is a tight turn and I could see current flowing, but all went smooth.

About two hours into our perfect cruise our day changed dramatically.

We were running in fairly strong current, which was running against us. Prior to the run, when I plotted the course, I deliberately took the long way around in order to have lots of margin for error giving myself nice wide waterways to travel in, rather than weaving between the San Juan Islands in narrow channels.

As were moving north (past Friday Harbor, for those familiar with the area) I saw we were approaching some whirlpools. Those are very frequent in this area. These didn’t look at all uncommon or bad. I had the boat in autopilot and was admiring the view when we were suddenly turned 30 degrees to port. A whirlpool had grabbed us! I figured the auto pilot would quickly straighten us out, and the boat did rotate back to starboard, but then just kept going. Alarms started going off. The autopilot was displaying an message “Rudder at limit”.

We were being pushed towards shore by the current and I had no ability to steer the boat.

I called my auto pilot expert.

Neither of us had a theory on why the steering wheel wasn’t working. I experimented with spinning the wheel. It took ten full rotations to turn the rudders even one degree. Was I low on steering fluid? No – I checked that. A bubble somewhere in the lines? Maybe?

As to the auto pilot: We looked through the settings and made an adjustment. The auto pilot had failed completely for one of the mechanics when he was moving the boat during the off-season. The auto pilot brain was removed from the boat (the control head) and no problem found. I have two auto-pilots and could switch to the other, but in this case our best guess was that it was simply a matter of some settings that needed reset. We tweaked some settings and hoped we had the problem fixed.

North of where I was, about an hour run up the channel was another set of whirlpools. I wasn’t looking forward to more trouble but needed to know if the problem was solved. I wasn’t underway for 20 minutes before I lost control again. There were some barely noticeable whirlpools around but nothing that I would even notice on a normal run.

Even in FU mode I didn’t want to enter another set of whirlpools. I had had enough excitement for one day. Yet, the only path to the marina was via another channel with whirlpools at the entrance and the current was showing as 4.5 knots. Slack was two hours away. Ordinarily we’d just have gone for it, but not today. Instead we found some calm water and hovered while checking email and letting time pass.

Here you see Roberta driving the boat using FU mode. There was still a few whirlpools around but she did great. When precision is needed we’ll often have Roberta drive. She’s very good at staying calm and not over-reacting.

Anyway .. here’s a brief recap of some of the major projects on the boat during the off-season….

Summary of work done to Sans Souci during the Off-Season

It probably says something about how we use the boat, but ….

Amazingly, we somehow managed to wear out both our barbecue AND our hot tub!

I have no pictures to show, but a lot of work was done to the boat’s electrical system. During last summer’s cruising we had our shore power adapter fail (the Atlas). It’s a refrigerator sized chunk of hardware that sits in the lazarette (behind the engine room) and allows Sans Souci to adapt to virtually any type of electricity around the world. Luckily, the Atlas mechanics were on the west coast and were able to spend several days making my Atlas new again.

My backup shorepower system had also failed. The Atlas has a 100 amp capability. Independent of the Atlas Sans Souci has a 50 amp shorepower cable that goes into a voltage regulator and then into my inverters. It was repaired.

And, my batteries were dead! I run a generator at all times when away from the dock, but do depend on the batteries to keep the boat powered under a limited number of circumstances (eg. Brief power outages at the dock).

Replacing the batteries on Sans Souci is not an easy or inexpensive job. They seem to die about every three years which is more often than expected. It could be said that the batteries haven’t been dying, they have been killed. When I am away from the boat there are times when the shorepower fails and the boat is without power. Usually the shorepower is only out for minutes, and usually power on the boat is restored.

I receive emails from the boat when the power goes off, and another when it is restored.

On rare occasions (it seems to happen at least once or twice a season) either the dock circuit breaker is tripped, or a breaker on Sans Souci trips. This means the power stays out until I can find someone at the marina to go the boat and physically flip a breaker. If it’s a weekend, and no one can be found, the power stays out for days and the batteries become fully discharged, which can lead to their premature death.

I had decided that the next time the batteries needed replaced I would replace them with a newer technology battery called Lithium Ion. These are the batteries that power laptops and Teslas. They are expensive, but light weight and more importantly they last several times longer than the AGM batteries I have been using.

However, after doing some serious research I decided to pass on the idea of swapping to Lithium Ion. I do think Lithium Ion is the right answer but I was unable to find another Nordhavn owner who had made the change and I didn’t want to be the first. Lithium Ion batteries need to be treated properly. They don’t like extremes in temperatures. If mistreated, a Lithium Ion battery can explode. I did convince myself that the risk of fire was so miniscule as to not be a concern, but couldn’t get over the idea of pioneering. I’ll wait until someone else goes first.

After discussion with other Nordhavn owners I decided the right answer was to add auto-start to my generator. I have resisted doing this because I don’t like the idea of the generator running when I’m not on the boat. By adding an auto-start capability to the generator it would be possible to have a computer intelligently monitor shorepower and start the generator should shorepower go out. I spoke with some of the smartest Nordhavn owners I know and they have gone to auto start. So .. I buckled and the boat now has auto-start, and new AGM batteries.

Many of you might remember that when Sans Souci was first purchased I installed a Simon vessel monitoring system. For those new to the blog, a monitoring system is simply a computer that checks on things around the boat and displays what it finds. For example, the monitoring system can measure the temperature in the engine room, or on the shafts that turn the propellers, or measure the voltage of the shorepower coming into the boat. Because it is a computer doing the monitoring it is possible to establish normal ranges and have the computer alert the captain when something unusual is occurring. Sans Souci had over two hundred things being monitored.

Simon is a great system and is typically installed on much larger and fancier boats than Sans Souci. That said, the company behind it is in Florida and when I need some change to the monitoring system it means scheduling a technician from their company to fly to wherever the boat is and do the work. Simon is a “closed system”. They really don’t want anyone but their own techs working on the system. This presents a problem: I can’t do much of anything myself, nor can my mechanics. Making it rougher: The Simon company can be hard to schedule. Their techs are awesome when you get their attention, but as the “little guy” in their universe I’m not always their first priority.

I’ve been considering Maretron for years but didn’t want the expense of ripping out the Simon system in order to install Maretron. Each of those two hundred points of monitoring would have to be considered for replacement.

The beauty of Maretron is that it is a much more open and easily extensible system. It is NMEA 2000 based and most importantly my mechanics or I can add or remove sensors, and change the monitoring without needing to call anyone.

So .. After a lot of research, and some good discussion with a Maretron engineer, I went for it!

That’s it for this issue of the blog.

Thank you!
Ken, Roberta, and the pups: Toundra and Keely
Nordhavn 68, Sans Souci