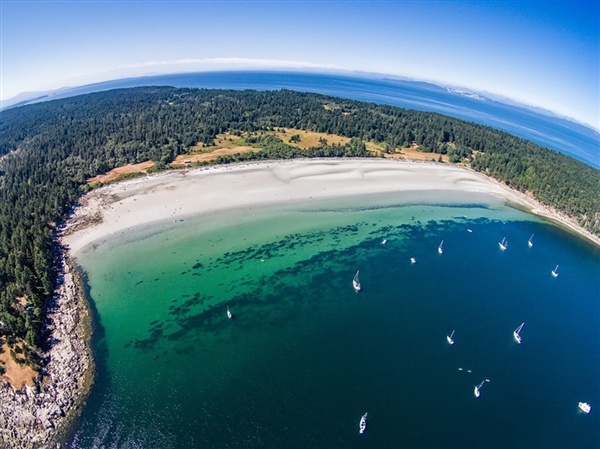 It’s funny how you can be surprised on a boat.

We were looking for a place to drop anchor while running south to Nanaimo and noticed a horseshoe shaped island (Hornby Island) that seemed like it had a nice big anchorage in the middle. At first we ruled it out because it was wide open to the south and the cruising guides said the anchorage could be dangerous in a south wind. The forecast was for wind from the Northwest only, which meant the wind shouldn’t be a problem. That said, we’ve been fooled by the weather forecasters before. Weather forecasts are important information but should never be completely trusted.

When we saw this aerial photo of the anchorage it looked so perfect we had to take a chance. It made the decision easier that there were a couple nearby better-protected places to anchor. In other words we had “bail-outs”; our word for a place to go if the anchorage (or a passage) suddenly becomes a problem.

Our plan had been to spend one night but we wound up staying almost a week. There isn’t much I can say about those days except that they were wonderful. The anchorage was crowded but was so large that we had plenty of room to anchor. The bottom was sand and a perfect anchoring depth. Best of all, we nailed it on the weather. The days were warm and windless. The water was cool but warm enough that swimming was possible. We barbecued, hot tubbed, watched tv, read, spent time on our computers, and just plain enjoyed life. The best times on a boat are the least exciting to talk about, but those are the ones that justify the purchase.

During the off-season we purchased kayaks but have never tried them.

The biggest reason we hadn’t tried the kayaks is that we have had trouble figuring out how to get them from the bow of the boat down to the water. The kayaks are heavier than they look and our boat, the Nordhavn 68, has a higher bow than most boats. It’s an eight foot drop from the bow to the water.

I experimented with lowering the kayak to the water using my davit. To drag the kayak to the back of the boat I attached a line and fed it all the way to the back of the boat. This is harder than it sounds. The N68 has a stretch of about six feet where the walkway is enclosed and running a line around the outside requires creativity. The bigger challenge came when I tried to unclip the davit cable from the kayak, after the kayak was lowered to the water. I couldn’t reach the top of the kayak while standing on the bow to unclip the kayak from the cable attached to the davit.

I also experimented with putting out lots of cable from the davit while Roberta dragged the kayak backwards. This idea didn’t work at all. The davit cable wasn’t long enough to reach the back of the boat and it quickly became apparent that this would lead to the steel davit cable dipping in the salt water. Not a good idea.

Finally, I had an inspiration that worked great. I added an intermediate line of only eight feet in length. This line was attached to the davit cable at one end, and to the kayak at the other. I then ran a line from the kayak to the stern of the boat. I used the short line to drop the kayak into the water and once in the water unclipped it from the davit cable and let it fall onto the kayak. Roberta then stood at the back of the boat and reeled in the kayak.

It worked! We had fun kayaking to the beach. I reversed the process to lift the kayaks back on deck. The puzzle was solved. Overall, the workout I got lowering and raising the kayaks far exceeded the energy expended to paddle around the bay. I’m not sure it was worth it, but .. mission accomplished!

After days of sunshine and no wind, there were finally clouds on the horizon. We decided to head south to Nanaimo (only a five hour run). We chose our time to head south so as to ride the southbound current and had an extra knot of speed all the way.

We reached Nanaimo just as the tidal current was reversing. We had been planning to spend the night at Nanaimo in order to time it for slack the following day at a narrow passage just south of Nanaimo called “Dodd Narrows.”

Suddenly Roberta said, “Is this slack time at Dodd Narrows?” I checked .. and, it was!

Bottom line: we just pushed on, went through Dodd Narrows and then started looking for a place to anchor. We hadn’t thought ahead to where we’d anchor next. Who plans 24 hours into the future? I looked at the chart and to my surprise didn’t see anyplace that looked particularly promising. So instead, I contacted the Van Isle Marina in Sidney British Columbia, near Victoria Canada. They said they could take us.

It had been over a month since we had been on land and the dogs were wanting off the boat.

We also were eager for a “real” restaurant experience. Our last dinner out had been at the Echo Bay Marina where they ask you to bring your own plates and silverware. We have great meals on Sans Souci, but both Roberta and I were looking forward to a sitting at a table with a real table cloth and having someone else to wash the dishes.

Plus .. I had some mechanical issues that needed attention…

(Note: those of you not interested in tech things should stop reading now)

Sans Souci’s bilge (aka the basement of the boat) has been slowly taking on water. The bilge is broken into various compartments and the problem has only been in one bilge; the “midship bilge”. We’re not 100% sure where the water has been coming from. Our theory is that we got a new washing machine and one of the hoses needs tightened. Unfortunately, the washing machine is wedged into a tight place and there is no way I can get to the back of it.

The bigger problem is that the water hasn’t been draining from the bilge. I have two bilge pumps in that bilge; an automated one and a manual one and both failed. Argh! To get rid of the water I’ve had to use a wet/dry vacuum and toss it overboard one bucket at a time.

After tying to the dock I discovered I had bigger problems: My shore power wasn’t working.

I have two ways to bring power to the boat:

Normally, I put out the 100 amp cable, but my Atlas system died a couple weeks ago. It was slated for service when the boat was in Florida last year, but an accelerated shipping schedule interfered.

I figured I had a backup (the 50 amp cable) and could worry about getting the Atlas repaired after the end of the season.

There is one thing you can say about Murphy’s Law: It is reliable. Within 24 hours of attaching my 50 amp cable at the Van Isle Marina the Auto Shore unit failed.

As I type this I am running on my 20kw generator. Thus far the marina hasn’t complained, as Sans Souci’s generator is very quiet.

I’ve received excellent support from my usual mechanics, Pacific Yacht Management who flew in to help, as well as from the local marine service here at the Van Isle Marina, Philbrooks and expect to be back on the water within days.

And since I don’t have too much to say, I’ll throw in some random topics…

We have satellite internet on the boat (VSAT) but it is fairly slow and has been unreliable this year. The problem is that the satellite is located somewhere south by the equator. This is fine in open ocean or when the view to the south is unobstructed. However, when traveling in narrow channels between high islands, as we have the last few weeks, the internet satellite is frequently blocked. We’ve solved this by seeking anchorages that are open to the south, or choosing where we anchor within a bay based on the landscape to the south.

Tribune Bay was a special treat, in that not only did our VSAT work, but we discovered that our TMobile cellular sim cards work.

We have an expensive, but magical, router on Sans Souci. It accepts sim cards; the same sim cards as go into telephones. This allows us to have cell phone LTE internet on the boat. It’s fast, and relatively unlimited. I have two Tmobile sim cards which work in both the US and Canada, each giving 20 gigabytes of data, plus the vsat which provides another 40 gigabytes.

I should also mention that the router allows us to limit the bandwidth, and monitor the bandwidth consumption of every device on the boat. We have a lot of electronic devices on the boat which can eat a lot of bandwidth when you aren’t expecting it; Apple Tvs, TV receivers, navigation computers, our own computers, our ipads, our cell phones, etc. All of these seem to want to update themselves from time to time. My router lets me turn off the internet for any device at any time, see how much internet they are using, and restrict their bandwidth partially or completely.

I’ve experimented with various ways to stop banging up the fiberglass and teak on my swim step. In calm seas there isn’t a problem. But, we’ve been in many anchorages where the swim step is rising and falling several feet as you try to transfer people and dogs from the tender to the boat. Year after year I have had fiberglass and teak repairs, but NOT THIS YEAR! I added a rubber bumper to the stern that has done a great job. Due to the calm anchorages we haven’t given it a full test, but I’m very optimistic that we finally have a solution.

There are a couple things to talk about in the picture above.

One of the best things we did during the off season was to add roll-down shades to the upper aft deck. It’s where we eat 99% of the time when at anchor. However, on a boat when anchored you can’t control which direction the boat faces, and we tend to eat early. This has often meant the sun staring straight at us while we try to have dinner. We’ve thought about enclosing this area but that would put us “inside” which would spoil the esthetics. Instead we added a series of roll-down panels that allow us to shade just the portion of the boat facing into the sun. It has worked perfectly.

Several people have asked how our expensive new “at rest stabilization” system has worked. The quick answer is that we still haven’t had an opportunity to use it. In the Med we couldn’t find a night where we didn’t need our flopper stoppers (a primitive form of at-rest stabilization based on using plates that dangle in the water) and here in the Pacific NW we have yet to find an anchorage where there is any swell. It really is culture shock for us. I keep thinking we’ll get slammed but we’ve had a combination of good anchorages, good weather, and good luck. The season isn’t over and there’s still time for us to get slammed. I’m in no hurry.

That’s all I can think of for this issue of the blog. As always, thank you all!