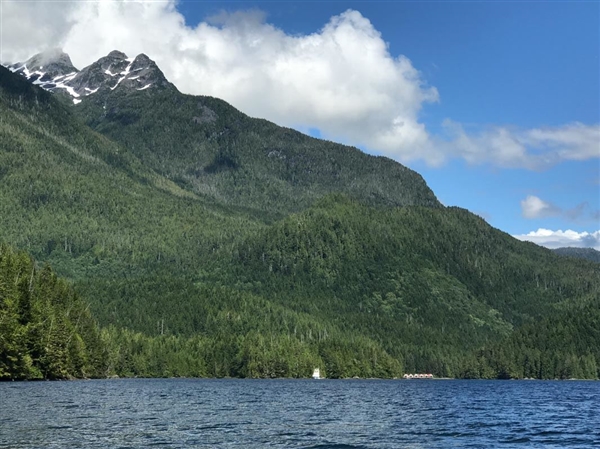 Thank you to everyone who contributed all the great solutions to the riddle from my last blog entry. I’ve included your responses at the bottom of this blog entry.

A brief comment about this season: Even though cold water cruising isn’t my first choice, we’re having fun! We have managed to find bays where we were 100% alone, or huge anchorages with only a couple other boats. We’ve been barbecuing, hanging out in the hot tub and exploring by tender. Cruising doesn’t get much better. And, best of all, we’ve had nothing but good weather. These one inch seas and days with no wind are spoiling us. I’m sure I’ll have had my fill of this kind of cruising by the end of the summer, but we are definitely enjoying it now.

The funny thing about boating is that when it is the best, it is the least interesting to talk about. So, apologies that the blog seems a little boring this year.

A friend said to Roberta and I that we should check out a resort called Nimmo Bay and try to see if we could get reservations for dinner. I had never heard of the place but quickly discovered that it caters to the ultra-high-end luxury crowd. We were blown away by the Dent Island Resort, but Nimmo Bay kicks it up another giant notch. It’s a small place with only nine cabins and no marina. Access is only by boat, float plane or helicopter.

Although they don’t have a marina, they do have anchorage nearby and they welcome boaters, but only IF THEY HAVE ADVANCE RESERVATIONS. We made our reservations for dinner at Nimmo Bay two weeks ago and were warmly greeted. Choosing a date for dinner was a challenge in that they were already booked every night for weeks. And, when we arrived we watched as four other boats without reservations were turned away.

Anyway .. I’m not sure how interesting this is to people, so I’ll just show some pictures from our visit.


Your answers to the riddle from the last blog entry


James E- Long bungee cord would have worked a treat!

Fred G – Ken perhaps you make a variant of a continuous ridgeline used on a hammock tarp to center the tarp over the hammock between two trees. Use one end through a float to an anchor and hook it to the stern of the boat and the other end you set around a tree and hook it to the bow of the boat.

By pulling on one or the other line you to move the boat towards you or away between the tree and the float. Not sure about the weight of moving the boat or diameter of the line needed. For the tarp I’m using a dyneema line of a small diameter. You can google it for examples. Doesn’t require a bungee.


Peter K – “Long bungee cord”, you’ve got the right idea, Ken. I started to explain my system, but found this on the web which does a better job of it. Besides, it has pictures!

Also, get a spare prop for the outboard! Dinging a prop is all too common an occurrence, especially in the Inside. You don’t want to be without your dingy. You can hammer out any dings to keep the outboard usable.

Chris W – If you fixed a very heavy wheel-like anchor to a float, they would want to maintain a constant distance from one another, so the wheel would roll up and down the slope of the shore as the water rose and sank. (Of course, a wheel-shaped anchor would probably also migrate around quite a bit, get stuck on things, and tip over. Outside of a drawing, I don’t think the idea would work very well, for very long.)

Shawn S – You have to jump and grab a condor. He will take you to the beach.

Bob F- Hi Ken, Here’s a tender retrieval system I’ve used many times, give it a try. It will allow you a longer distance than the bungee type of retrieval. Very simple, just a long line tied to the bow and stern, with the middle going thru the ring or shackle at the top of the anchor. Let me know how you did. We enjoy your trips…..


Bob A – Hi Ken, Glad your finally discovering some of the best cruising in the World.

Solution to the dinghy problem. We had a RIB which like yours was too heavy to drag on the beach–except maybe with “wheels” that drop down on the transom. We carried a several hundred foot piece of 5/16″ anchor line, to make an “endless mooring line”. We had our small dinghy anchor, with about 10 feet of 3/8″ chain. There was a snatch block shackled to the end of the chain, and the “endless line, passed thru that block. One end of the line was attached to the bow eye of the inflatable, the other end was to a stern eye . If several people, we would let them off at the beach, and then I would set the hook. For just the 2 of us–we set the hook on the way in to the beach and paid the two lines out as we went in to the beach. This was well beyond where the beach would be at low tide (always checked the tide tables). After we disembarked, we pulled the dinghy out to deeper water, to give at least a 3/1 scope with the bow line–and then tied the stern line to a tree well above the high tide mark.

When we returned, we pulled the dinghy back to the edge of the beach—pulled out to the anchor with the line, and pulled the anchor. All coiled back into a plastic bucket for the next time’s use. Our best for cruising this wonderful area.

D00mM4r1n3 – I wonder if it would be practical to replace a tender with an Amphicar? Just drive up on to the beach and drive back into the water when ready to go. Apparently a company called Sealegs makes traditional tenders with wheels as well.

James B – I would drop an anchor just offshore attach a ball to anchor with a pulley take pulley lines into beach attach dingy and pull out to ball just like the old clothes lines! It works !

John H – Our solution to your problem was easy. We made up a clothes line system for the large tides. In fact I have one on this boat and use it for our tender as Sandy and I can’t budge it off the shore if we get caught at low tide. During our cruise of the Queen Charlottes we found it was the

only way to anchor. We even found the of the locals had a permanent system installed to a large rock about 200 feet off shore. We just tied up the line and pulled ourselves towards shore.

This system works very well, but takes a little to figure out the best way to deploy it for your boat.

We have a small anchor with about 6 feet of small chain attached and an eye of shackle at the end of the chain.

Next you need about 300 feet of very light poly line. Maybe 3/16 or ¼ inch. The line will have 2 pulleys with a snap shackle on one end to attached to the anchor and a Shackle on the other pulley to tie a length of line to the end of the pulley to tie to a tree or something on shore. This line could be another 100 feet. Again doesn’t need to be heavy.

We keep all the line in a plastic clothes basket for easy of storage and to fake the line into the basket on retrieval.

Once on shore, you can tie one of the two clothes lines to the bow of the tender and pull on the other side of the clothes line to pull the boat back out toward the anchor. Once satisfied on where you want the tender, tie or clip the single extra line you have to the shore side pulley and tie it to a tree, rock or anything you can find to secure it.

Go hiking, sight seeing and on your return, pull the boat back to shore and start putting everything back into the basket. As you pull the clothes line back onto the tender in the basket, you will find yourself over the anchor and pull it up. Presto you are done.

Now that you are totally confused, Google Clothes Lines Anchoring system for small boats and you will get some hits. Even YouTube videos.

Ruaan R – Get a chopper

RanchHQ – Ken/Roberta: Enjoy your travels. Me? I would have begged a ride with the Couple in the like tender and then paid with BBQ Pizza.


That’s it for this edition of the blog.

Post Views: 539
PrevPrevious Post[Kensblog 2017-04] A riddle for you to think about
Next Post[KensBlog 2017-06] Southward BoundNext