Having Launch, Putting Some Clothes On, and Turning On the Lights 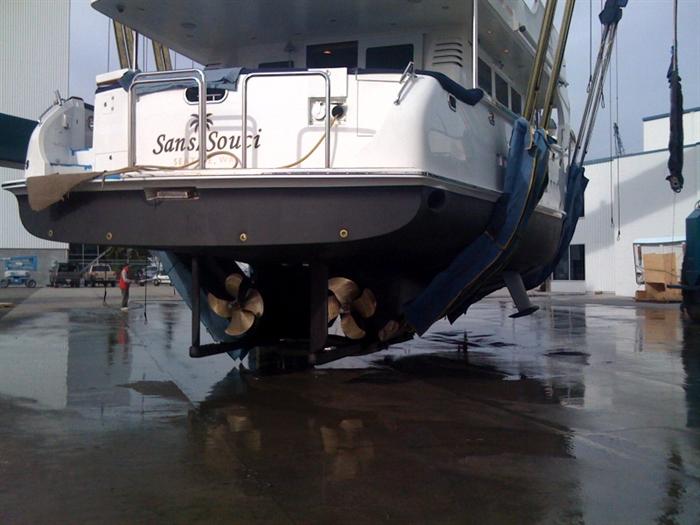 I am very pleased to report that Sans Souci is now back in the water!

I always worry when the boat is lifted in or out of the water. There was a Nordhavn 47 that was destroyed during a haul-out in 2006. My boat had a failed haul-out attempt last year, and there was a recent incident involving a Nordhavn 55. The boat was only a foot or so off the water when a strap came loose. Had it been a few feet higher it would have been a disaster.

As you can see here, all went smoothly putting my boat into the water:

And on a completely different topic…

I asked an artist, who works with me, to design some clothing for the upcoming GSSR. We want our crew and guests to look like “real” professionals while on board. I think he did an outstanding job, and think you’ll enjoy seeing his work. If you are in the mood for a 5 megabyte download, click here.

I asked the printer whether or not readers of my blog could order the clothes, and he said that they aren’t set up to sell single items. I don’t have time to mess with it. My guess is that we will find a way to sell some of these items (on a break-even basis), if people want to buy them, but I don’t know how or when.

I think I mentioned a few days ago that we’re looking at swapping all the overhead lighting from Halogen to LED. I had a preliminary guess that we have 120 overhead lights. We now have the official count: 163 lights!!!

Each of the overhead lights is 20 watts. Out of curiosity I did the multiplication to see what the power requirement might be if all lights were on: 3.2kw!! That’s a lot of power.

The halogen lighting has been annoying. We’ve had problems with the lights burning out quickly, and even melting fixtures. I believe I now understand why we’ve had this problem. My boat has a 24 volt electrical system for powering the lights. The bulbs were specified to be 28 volts, but I believe several 24 volt bulbs have found their way onto the boat. The excess battery voltage, during battery charging, has shortened the bulb life.

I’m thinking about swapping all of the Halogen lights for LEDs. We discussed installing LED lighting when our boat was built, but at the time, our perception was that LED lighting looked bad. LED technology has been rapidly evolving, and the newer LEDs put out a much higher quality light.

LED bulbs use less power, run cooler and last longer. Instead of a 20 watt power requirement the consumption is under 5 watts. I’ll be able to drop the power requirement for lighting, if all lights were on, from over 3kw to just 800 watts. Jeff has been testing the LEDs on Sans Souci and said that he couldn’t believe the difference. The halogens were always so hot that you would get burnt trying to touch one, whereas the LEDs are absolutely cool to the touch. Lastly, the rated life on Halogen bulbs runs around 2,000 hours, whereas LEDs are rated at up to 50,000 hours.

Swapping to LEDs is an expensive proposition. We’re still evaluating proposals, and I might decide it is not worth making the change. The LEDs could also require any dimmers on the boat to be replaced. This could turn out to be $50 to $100 PER LIGHT, in which case I might go an alternate route, which has been suggested. Xenon bulbs are a simple replacement for Halogen, and cost only about $8 each. They have a lifespan roughly three times that of Halogen. They also run a bit cooler. Another Nordhavn owner made the switch, and said that his Halogen lights were running 155 degrees, versus 130 for the Xenon.

What I’m really looking forward to is when LEDs are possible as anchor lights. Lowing the electricity requirement for an anchor light is critical. The key to running off batteries all night (rather than running a generator) is to reduce the electrical loads. An anchor light with dramatically lowered current demands might make the difference between getting to sleep in, and having to start the generator at sunrise. I’d also like a light with a longer life. My anchor light is located high enough that I’d like to avoid ever replacing it myself. It has already needed replaced once, and I happily outsourced this task. If it burns out while Roberta and I are anchored in Alaska, I’ll have to put a step-stool high atop my radar arch (the height of a four story building above the water), and as the boat rocks, try to swap the bulb. There are LED-based anchor lights in use today, but the increased voltage, in order to increase visibility is causing shortened lifespan. Also, because of my boat’s size, I need an anchor light visible for 5 miles, and existing anchor lights are rated only to two miles.