Hauled Out At Delta 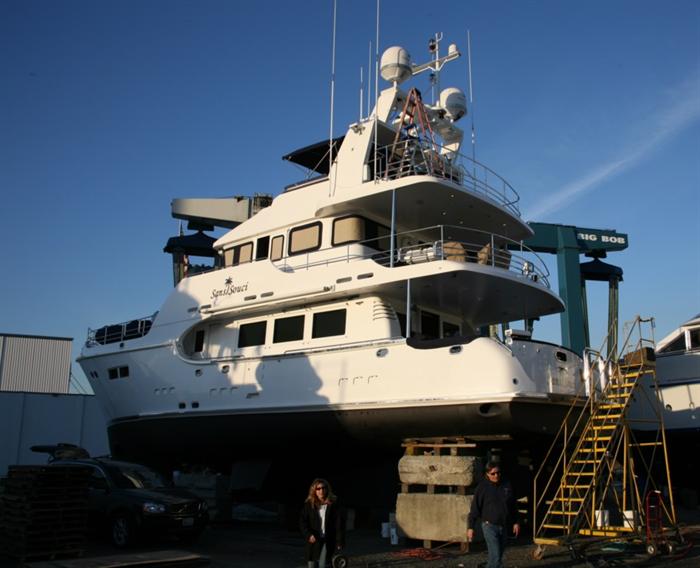 We were able to visit Sans Souci at the Delta shipyard in Seattle yesterday.

We were only in Seattle for a few days (We’re back in Cabo now), and didn’t have much time. I took my camera, with the goal of taking lots of pictures, but was only able to snap a couple. Jeff wanted to show me all that was done, and we were practically running through the boat trying to get to everything in the brief time allotted.

Also… I didn’t really want to take pictures of the interior. It looks somewhat as though a bomb went off, and to someone not accustomed to seeing boats look like this, such as myself, it can be very disconcerting. Jeff assures me it will look like a boat again, in just a few short weeks, and I’m confident it will.

In the pilothouse, a lot of work is going on to upgrade my Furuno Nav system from navnet to navnet 3-d, replace my Fleet 77 with a Mini V-Sat (fast internet), and add a Fleet Broadband unit (my backup internet system). This upgrade is complete and all hardware is in place. There’s still some wires to be terminated, but most of the hard work is behind us. The toughest of the jobs in the pilot house has revolved around moving equipment around. Our primary cruising grounds will be tropical, and there are several places around the boat where heat has been an issue. Keeping the electronics cool has been impossible. We’ve fried an endless stream of power supplies and other electronic equipment. We’re reshuffling the location of the electronics to make everything easier to get at, moving equipment to where the ventilation is better, and adding fans.

The biggest of all the jobs has been the project to upgrade the size of the thru-hulls. The boat came with 2” hoses and Nordhavn swapped on the newer boats to 3”. I had really just thought Jeff would drill some larger holes in the seachest, and in the hull, but it was not this simple. The thru-hulls had to be relocated. Also, the hoses from the thru-hulls to the strainers had a sharp 90 degree that I felt should be eliminated. And, with the larger hoses came a major upsizing of the strainers. This required moving the strainers. Ultimately, a decision was made to use my main-engine intakes for the seachest intakes, and to drill new intakes for the main engines! It’s all done now, and I do believe it was worth the effort, but if I had known what I was getting into…

We added exterior strainers to the bottom of the boat that are quite impressive. Here you can see how they look. In addition to the screen, there is a small filter, which can be swapped from under the boat.

I had mentioned that my goal in the lazarette was to free up space. Here you can see my battery bank. And, what is amazing is that you REALLY can see all of my battery bank. Previously, I had never seen my batteries. They were stacked three layers deep, and topped by an electrical panel which didn’t allow me to see them at all.

In addition to the space savings, I wanted instant visual access to the batteries so that I could quickly monitor for loose connections. I bought a very cool device, that I plan to make part of my regular engine room inspections. It’s a TI-25 thermal imager.

My goal is to be able to point it at the entire battery bank, and instantly see if there are any “hot spots”, which might represent a loose wire. All it takes is one spark at the battery bank to wreck your whole day.

I was also curious to see my new air conditioning units. In perhaps the most unusual decision I’ve made, I swapped out four Cruisair 36,000 BTU chillers for two Technicold 60,000 BTU chillers. I’ll have nearly the same chilling capacity, plus softstart capability (via VFDs) in slightly over half the space. The new units will be easier on the electrical system, free up space for a dive compressor, and in my opinion are much more maintainable. The Technicold units are dumb beasts. There are no fancy computer control panels. They are “on” or they are “off”. There is a temperature setting, and that is it. I wanted something that I could fix, and these feel more appropriate to my skills.

It was fun seeing my boat hauled out, almost side by side, with a Nordhavn 86. It was a bit humbling. The N86 is a huge boat!

Post Views: 226
PrevPrevious PostSiberian Bureaucracy and A Cruiser Robbed
Next PostHaving Launch, Putting Some Clothes On, and Turning On the LightsNext