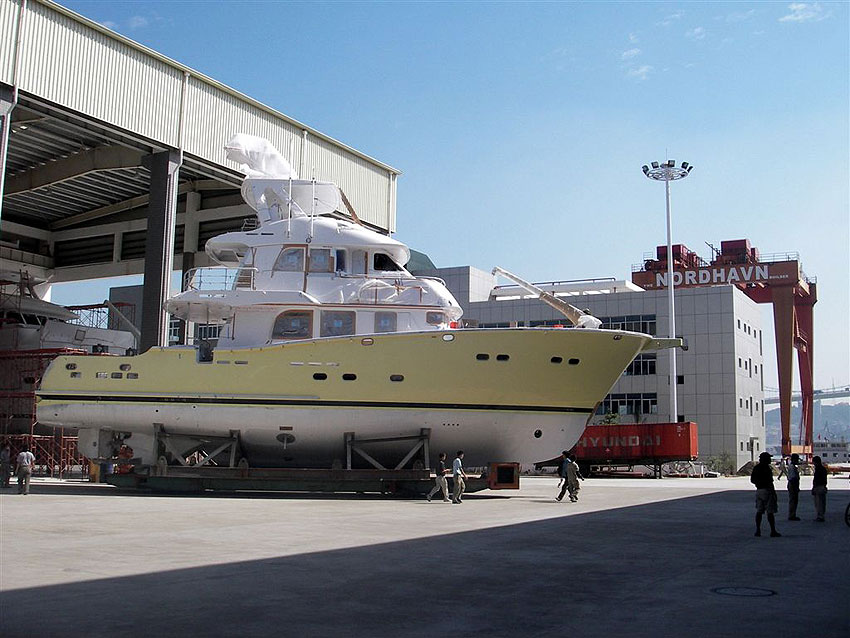 Nordhavn posted a couple of pictures on their website today of their new 75′ Sportfisher.

I’m curious to see how it does. I personally think it is going to do very well, even though it seems to violate one of the cardinal rules of sportfishers, which is that “it’s all about speed.” Whereas us trawler folk are happy to plod along at 8 knots, the sportfisher audience believes 25 knots is where it is at.

However, in my opinion, there are a few reasons why I believe this boat could be a big hit for Nordhavn:

1) Range. This is a boat with a 3,000 nm range! Most sportfishers have under 500 mile range. This allows the owner to go places others can’t. I know that on my boat, there is a clear difference between fishing around big tourist areas, and in places no one goes. A lot of popular destinations have been “fished out.”
2) Comfort. Boats are expensive. Generally speaking, the bigger boats are bought by people who are well into their careers, or are retired. As we get older, comfort matters more and more (at least at my house!) This is a boat that lets you go long distances in style.
3) Fuel consumption. Don’t let the recent price drop for fuel fool you. Miles per gallon counts. This is a boat that uses a fraction of the fuel other boats do.

I don’t fish, and am not a target buyer for this boat .. but, I like the idea, and hope it does well.

As to my boat…

I mentioned last week that I’ve been working on finding flow sensors, so I could measure the fluid coming and going from my sea chest.

I ordered one flow sensor, which came in a couple days ago: http://www.ingramproducts.com/pdf/F300.pdf

My hope, reading the ad, was that it could measure raw rater flow through my cooling system. It might do this, but my first reaction upon opening the box was disappointment. This particular sensor was comparitively inexpensive (only $400). However, it is large and feels clunky. It is about 7 or 8 inches long, and has standard hose fittings at each end. I’ll have to be creative to plumb it into the system, and I don’t know I’ll have the space to put the six of them that I’d like to install. Worse yet, I had interpreted from the specs that it used ultrasonic technology. I don’t want anything that interrupts the flow of the water. Unfortunately, when you look at it closely, it has a place where the water flow is narrowed. It measures the pace of the water by funneling it through a narrowed pipe. This is an opportunity for clogging. I remember from my college days an old saying that it is impossible to monitor something without influencing it. This seems to be particularly true in this case. And, adding to my doubt that it will work as I want, there is a paddle wheel! I wanted an ultrasonic sensor so that I could measure the cooling water without slowing it down. I don’t want anything that might harm the flow of water.

I have another estimate from a company to do the measuring, in a way that does not impede the flow of cooling water — but, it is expensive. Why is nothing ever easy?

PS And, lastly… There was another pirate attack today against a freighter. The most amazing thing about this one is that the pirates attacked the ship FOUR HUNDRED AND FIFTY MILES OFF SHORE! When we ran Nicaragua my plan was to run 20 miles offshore, in order to beat the pirates. I now see that if they want you bad enough, they’ll come get you. I wonder how the pirates knew the ship was there? AIS? Radar only has a 30-50 mile range. Perhaps the pirates were just floating, waiting for a good target to come along?
Post Views: 275
PrevPrevious PostA challenging week
Next PostA couple of good days (for a change!)Next