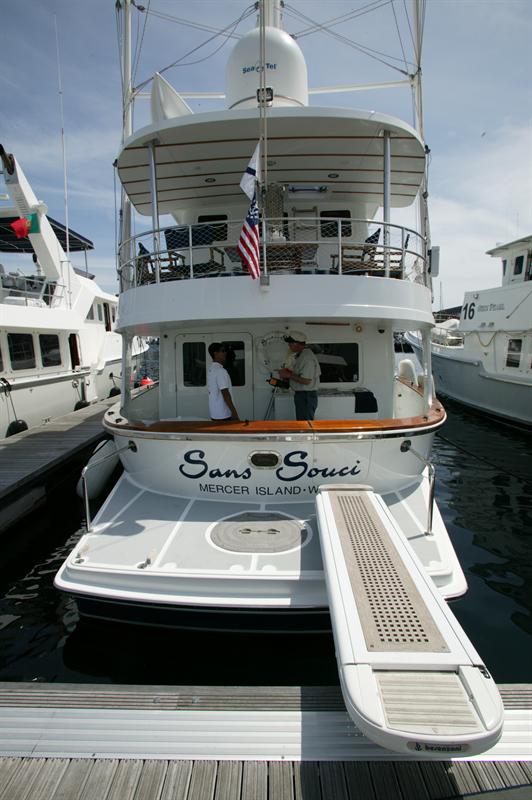 Our Nordhavn 62 was only about 68′ long, but it was “beamy”. Meaning, it was disproportionately wide for its’ length. The Nordhavn 62, when viewed from above, has a diamond, or canoe shape. It is narrow at the bow and stern, but fat in the middle. The problem this caused for us, in seeking a boat slip, is that our 20′ beam meant that the only boat slips around were sized for boats of much greater length.

Our actual beam was “only” 19 foot 6 inches. My style was generally to search for a 21′ beam slip, whereas for many boaters, this would translate to a 19′-beam slip. Here in Europe there are no finger docks to protect you from adjoining boats. As I mentioned yesterday, this usually means using your fenders to help push other boats out of the way as you back up. I really don’t like loud crunching noises, so I usually do what I can to find a slightly wider boat slip, which is definitely not the European standard.

Anyway.. when we were looking for our slip in France, the only slips I could find with a 21′ beam were on the larger docks, with the 100+ foot boats. We looked tiny alongside the monster boats.

I quickly discovered another way in which we were different. Generally speaking, boats over about 50′ in Europe (or, at least in the south of france) have professional crew. In the US, it is not uncommon to see a boat our size being run by a husband/wife team, but we simply didn’t see that here in Europe.

Roberta and I always used to find this really amusing for a variety of reasons. Foremost was that everyone around us were convinced that Roberta and I were professional crew. To be completely honest, they thought we were the worst professional crew they had ever seen. Since 2000, Roberta and I have come a long ways along the learning curve, but back in 2000, when we first took our slip, we were definitely rookies. Imagine their shock as we stumbled through our first attempt at Med Mooring. I hadn’t the vaguest idea how all the lines were supposed to work. A german crew member on an adjoining boat, after watching me mess up the bow line a few times, came aboard to show me what to do. Over the years, I do think we finally earned respect, but it took a lot of time. In the early days, it would take Roberta and I hours between arrival at the port, and when we were finally tied down with shore power attached. By 2005, we did this drill in under 30 minutes.

I’m sure everyone around us was amazed that in the years we were there, our owners never showed up. Whereas, for them, we always got a kick out of watching the show as the owners would arrive. Normally, the crews would wear shorts, no shirts, no shoes, and have a cigarette dangling. But on days the owners would be coming, the uniforms would come out. Flowers would appear. Towels would be laid out (for tanning). Usually, around 2pm, the owners would arrive, in their fancy cars. They would come aboard, and we would watch as the boat moved, usually one mile or less, to anchor, where the owners, and their guests, would swim, tan, drink wine, and then return to port a few hours later. After which, the uniforms would disappear, the cigarettes would reappear, and life would be back to normal. I should probably also note that the owners seemed to have a lot of young grand daughters, usually between 18 and 25, who would often accompany them.

I should speak for another second about the boats… In the south of france, speed is a huge deal. Many of the boats on our dock were “Mangustas”, usually 80 to 120′ long, and capable of 40-50 knots. However, we frequently had conversations with their captains who were jealous of our boat! The fast boats don’t do very well in rough seas, which are not uncommon here. They need the speed to “get there” during the short bursts of calm seas. But, once “there” the light boats, without flopper stoppers, tend to bob like corks. And, getting there isn’t always a sure-thing. Whereas Nordhavn’s are built to cross oceans, with layers of redundant systems — the fast cruising boats of Europe seemed to be broken as often as they were running.

Culturally, Roberta and I found our “peers” amongst the sailing crowd. We usually headed for the islands, where we’d drop anchor for days, and spend our time swimming, barbecuing, sipping wine, and “hanging out.”

The passarelle on our Nordhavn 62

|
Boat In Process Of Med Mooring – St Tropez
I couldn’t resist including this picture I took of Grey Pearl,
a Nordhavn 62 we crossed the Atlantic alongside.

Post Views: 333
PrevPrevious PostWelcome to the zoo: St Tropez
Next PostPassarelles, Power and A Guest ManualNext