End of an era, Start of an era 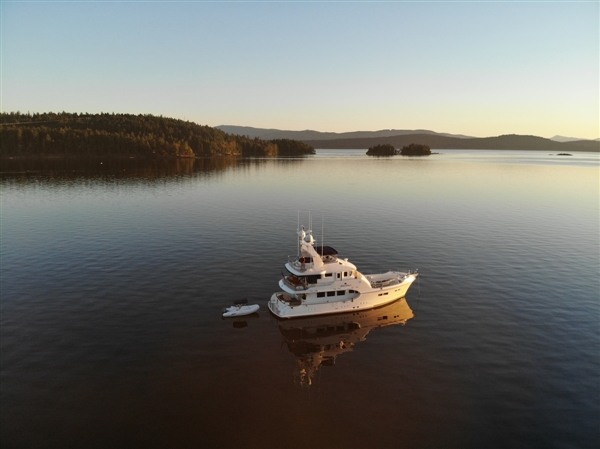 I have some very bizarre news. Roberta and I have listed Sans Souci for sale !

The quick answer is that after completing a semi-circumnavigation we’ve been struggling to think of where we want to go next. We’ve cruised our way through over twenty-five countries and have come very close on a couple of ideas. We joined the Waikiki Yacht Club in anticipation of taking the boat to Hawaii, and then had trouble finding moorage. Weird as it sounds, a marina in Hawaii accepted us, and then rejected us at the last minute. We felt burned by the whole situation. We then got serious about Ireland, but were having trouble making it fit our schedule.

Ultimately, the idea that excited us most became (drum roll please) … America!

Three hundred or so boats attempt a journey each year called The Great Loop that runs around Florida, up the east coast, into the great lakes, down the Mississippi and back to Florida, a journey of roughly 5,000 miles.

The reason we are selling Sans Souci is simply that we are thinking about getting a smaller boat with which we can do Florida’s Intercoastal Waterway (the ICW), and the Great Loop. We thought about buying a small boat just for the Loop, but don’t really want to own two boats. Plus overall, the truth is just that we’ve been in the mood for change. Every few years we like to shake up our lives and do something radically new. Part of being a boater is being a person who likes new adventures. As part of this, last year we sold our home in Mexico after living there for twenty-two years. We still love Mexico and highly recommend life in Cabo, but it was starting to feel a bit like “been there, done that”. Maybe it’s a mid-life crisis. I don’t know or care. I just know that the time had come for new horizons and new experiences and that is what we do best.

This has been an unbelievably tough decision. Sans Souci has been more than a boat to us. She has guided us safely around the world and taken us places that no other form of transportation could have reached. We’ve been on a campaign to make Sans Souci better year after year and can’t think of any way or option that would make her better. Our next boat may take us new places, but we will ever own another boat that provides as much comfort.

Different kinds of cruising require a different kind of boat. Boats come in a wide variety of types, each of which targets a different purpose. There are sport fishers, sailboats, fishing boats, trawlers, ski boats, catamarans, semi-displacement boats and probably more other kinds of boats than I could possibly list. Nordhavns are the best there is for the kind of cruising we’ve been doing. I can’t imagine another brand I’d be willing to take across the Bering Sea. Nordhavns are off-grid, heavy sea, serious world cruising machines.

But, although a Nordhavn will cross any ocean, our Nordhavn can’t get to Chicago and a smaller boat can. To do the Loop you need a draft under five feet, to be no higher than nineteen feet, and capable over going five hundred miles between fuel stops. Sans Souci only meets one of those requirements (fuel). The Great Loop is primarily run on rivers, some of which are shallow. The bigger problem are the locks (think of them as boat elevators), many of which are not very deep, and the bridges, many of which are fixed in height. Sans Souci has an over-seven foot draft and is forty-feet tall! All of Sans Souci’s size translates to comfort and safety at sea, but in this case it works against us.

We are in the final stages of working on a purchase order for a Grand Banks 60.

Many of you may know Grand Banks as a company that has been around for a while making trawlers.

Grand Banks took on new management a few years ago. They acquired a small Australian boat builder named Palm Beach, and through the transition the CEO of Palm Beach became the CEO of the consolidated company.

Grand Bank’s CEO is a gentleman named Mark Richards who has quite a sailing reputation:

I confess to being prejudiced towards the Australians and New Zealanders as boat builders. They take their boating seriously in that part of the world, and Mark’s Palm Beach line of boats has quickly built quite a reputation.

He has been revolutionizing Grand Banks and whereas there are some long-time Grand Banks owners who are sad to see long-marketed models go by the wayside, he has restored momentum and profitability to the company via some bold moves.

The boat we are buying, the Grand Banks 60 (GB60) is roughly the same length as Sans Souci, while weighing only one quarter as much. This is through two things: 1) The GB60 uses carbon fiber to reduce weight. And, 2) It’s a smaller boat. It isn’t as tall or as deep. Roberta and I will have to adjust to giving up some space, but ..really … it won’t be bad. I’ve been frustrated more by the smaller equipment spaces than the smaller living spaces. The GB60 has lots of space for a boat of its type, but .. we’ve been very spoiled on Sans Souci.

On the positive side, we hopefully aren’t giving up much on the seaworthiness side. Even for coastal and river cruising, seaworthiness is not optional. We are big believers in having maximum safety, and the GB60 is CE Ocean A rated.

And, a couple of other things that helped make our decision … The GB60 can run at over 30 kts, and cruises comfortably at 20kts (two to three times Sans Souci’s speed). And, at ten knots it claims to have an over 2,000 mile range!

Anyway.. this is just a short burst to let everyone know what is happening. As I get time I’ll post more about the equipment decisions I’m making and why.

As always, thank you!